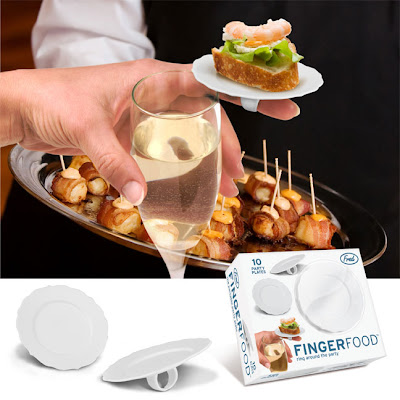 
Two consecutive weekends away from home has caused my Google Reader to explode, so I'm just getting around to playing catch-up. In my attempts to do so, I came across this article, dated October 1, 2008 and published in The Food Section, discussing cocktail party gadgets. More specifically, Josh Friedland talks about a new gadget called Fingerfood™ manufactured by Fred & Friends.


As you can see by the picture, Fingerfood™ consists of a miniature plate affixed with a ring that a party guest can slip over his or her index finger. We've all been there before, right? Mingling with other guests while juggling a glass of wine in one hand and a plate of food in the other. Just when we think we've managed the perfect balance between glass and plate, we're being introduced to someone we've never met and we don't have a free hand to offer in the form of a handshake. Now what? Either you luck out and have a table nearby to rest the items occupying your hands or you have to engage in the awkward redistribution of the glass and plate to one hand.

It seems like Fingerfood™ may be the answer to our problems. Yet, I have to wonder how comfortable (or uncomfortable?) it must be to have one of those plates on your finger. Also, it doesn't appear to hold more than one appetizer at a time. Let's face it, we all use plates so we can load up on an assortment of goodies, not just one bite at a time.

Have any of you tried this gadget before? If so, what's the verdict? If not, is it something you'd be willing to try?

V.Streit said…
Oh wow. I think I love it.The downside would be that you could only hold one thing at a time, but they're still cute.
October 14, 2008

Michelle Rittler // Taste As You Go said…
Veronica - I want to love it, too, since I've definitely experienced the "I'm out of hands" feeling. But I'm wondering whether something like the wine glass clip would be better suited for the cocktail party situation...
October 14, 2008

FOODalogue said…
I fear 'finger' food would soon be 'floor' food. It doesn't look very steady...though i imagine it would be a lot of fun getting your guests to keep their food upright as the champagne flows!
I think a better choice are those plates that have a slip-in hole for the stemware.
October 15, 2008

Michelle Rittler // Taste As You Go said…
Foodalogue - Apparently, the gadget is supposed to fit most fingers... Unless it's adjustable to some extent, I know that it would never stay steady on my index finger. My fingers are too slim. So if I used it at a party, I'm sure I'd be the first to drop something on the floor or in my drink!

I agree with you. As I said in my reply to Veronica, I think a wine glass clip or the plates you mentioned would be more ideal.
October 15, 2008

Anonymous said…
I, too, immediately thought of those wine glass holders with neck straps. But as soon as I saw the picture with the size of the finger plate, I knew it just wouldn't do for Thanksgiving dinner. So I wonder if those plates come in dinner-plate size with straps around the elbow. Then you could have a portable feast or play GameCube or ultimate frisbee. Or maybe you can get 10 of those plates and make Wolverine extensions.

Also, you really got the TradeMark symbol in there everywhere. Nice.
October 16, 2008

Michelle Rittler // Taste As You Go said…
modulo31 - What we really need to see is one of those beer helmets with the straws coming down to your mouth on either side marketed for wine drinkers. Then both hands are free. Problem solved. ;-)

You should write the people who make Fingerfood™ (had to get one more trademark symbol in there) and pitch them your idea for dinner-plates that you can strap around your elbow. You could be rich! You could be the next Ron Popeil, and I can say I knew you when. Of course, I'd write a spotlight about you on Taste As You Go, too.
October 17, 2008

Michelle Rittler // Taste As You Go said…
Zesty - Does this mean you're going to order it and try it out? I'll need a full report!
October 17, 2008