Dinner at The Park

The regular trio that makes up the Lehigh Dinner Club (Brian, Kym, and myself) was joined by a special guest for our November meeting at The Park last week, my college roommate Rob! We have been trying to get Rob to come up to the city to join us for dinner for months, so we were all thrilled that he could make it. After we had all assembled and had checked our coats, the host asked us whether we'd prefer dining "inside" in The Main Room or "outside" in The Garden. Since The Garden was enclosed, we decided to eat there, surrounded by climbing vines and Japanese maple trees. We were eating in what, literally, felt like a park. 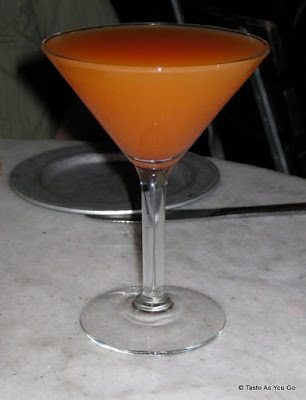 
In honor of the occasion, we started off with a round of House Cocktails. Kym and I each ordered a Sexy Bitch ($12), pictured above. I mean, seriously, how could we not? Rob had the Love You Long Time ($12) and, after Brian finished the drink he ordered at the bar before the rest of us arrived, he had the 10th Avenue ($12). 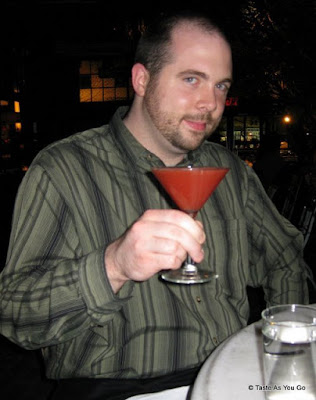 
Per usual, we took our time with the menu. There were just too many tempting choices! I had to ask our server for a recommendation because I couldn't choose between three dishes. While Kym started with the Mixed Field Greens Salad ($7), the rest of us quieted our grumbling stomachs by eating the bread that was brought to our table. I think I can speak for all of us when I say that the wait was worth it. 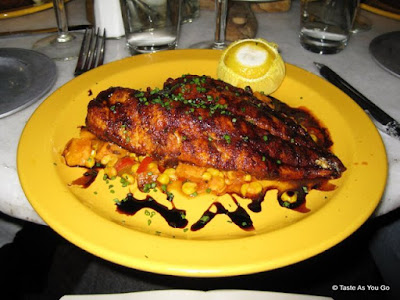 
I ordered the Blackened Catfish with Sweet Potato Corn Hash ($18). The catfish was perfectly seasoned and perfectly cooked. It practically melted in my mouth! And the bite of the seasoning was cut by the sweetness of the sweet potato corn hash. Despite the amazing flavor, do you know what amazed me most about the dish? The little "showercap" the piece of lemon was wearing to prevent any seeds getting onto my dinner! Honestly, I almost walked out of the restaurant with that thing in my purse. 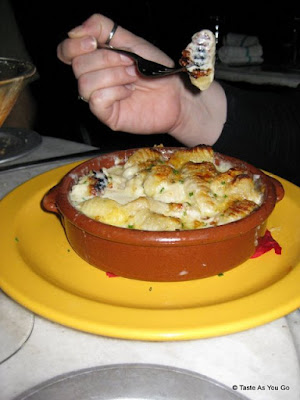 
Kym and Rob both ordered the Three-Cheese Baked Gnocchi ($14). We were stunned by the size of the gnocchi, as none of us had ever seen them that big before! The sauce was incredibly, incredibly rich. They both said the portion was almost overwhelming because of the richness of the sauce. I had the chance to try some of Kym's gnocchi, and I was almost sad that I hadn't ordered it, too. Almost. 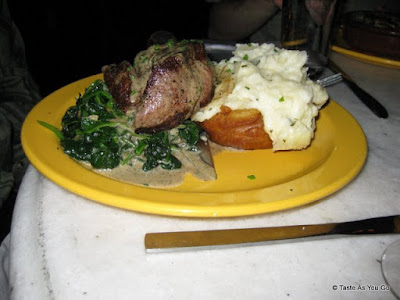 
Brian couldn't shake the impulse to order the Filet Mignon with Crispy Ginger Spinach, Onion Rings, and Rosemary Mashed Potatoes ($27). I'm glad he did because I got to have a taste! The mashed potatoes were deliciously creamy and the spinach gave some great flavor to the steak. The onion ring (were there more than one on the plate?) was curious, though. Not quite crispy and, in my opinion, used as nothing more than the receptacle for the potatoes. 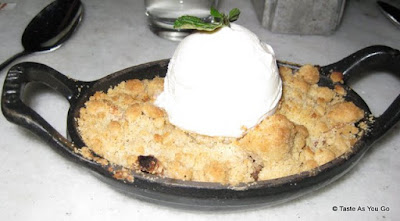 As if we weren't already stuffed from our main courses, Rob, Kym, and I bravely ordered dessert. It wouldn't be Dinner Club without dessert! Rob ordered the Flourless Valrhona Chocolate Cake with Bittersweet Chocolate Sauce ($8) while Kym and I were lured in by the "Crisp of the Day": an Apple Crisp with Tahitian Vanilla Ice Cream ($8). Oh my goodness was that apple crisp fantastic! Kym and I were happy that we opted to get our own desserts because there certainly wouldn't have been enough!

If you're looking for a new place to try in the city, definitely consider The Park. Just keep walking west until you think you're going to hit the water! We only have one more Dinner Club meeting of 2008, and I can't wait to see which restaurant Brian picks and I hope Rob can join us again!

Michelle said…
Kym - One of the most important components of the meal! Aside from the Sexy Bitch(es) and the Apple Crisp! ;-)
November 26, 2008