Food Network Magazine: Take It or Leave It? 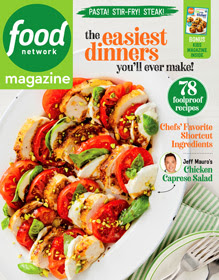 (Image courtesy of the Food Network)


I was provided with product samples at no cost. I do not accept monetary compensation for writing about these products or about my experiences while using them. All opinions expressed are my own.


Back in the beginning of November, my friend Eudora sent me an email telling me about the new Food Network Magazine. If I acted quickly, I could have the premiere issue sent to me at no cost. Given the fact I don't have a cable package that allows me to watch the Food Network whenever I please, I thought "subscribing" to the magazine was a suitable alternative... especially since my less-than-ecstatic feelings about the Food Network's website redesign have caused me to visit their site less and less.

Due to high demand, the magazine took longer to reach me than the folks at the magazine anticipated. (I received two "it's on its way" cards in the mail, assuring me that they hadn't forgotten about me or my desire to check out their magazine.) When it finally arrived, I waited nearly a month to flip through its pages with any seriousness since I wasn't in any urgent need of the recipes or ideas contained within the magazine. The magazine landed in a pile of magazines I had been saving to read while on my two-week vacation from work; thus, the reasoning behind my very belated review of the inaugural issue.

Right away, I was impressed that you're given three different ways to find what you're looking for. There is a traditional Table of Contents at the front of the magazine, along with a list of recipes sorted by the celebrity chef who developed it, and a recipe index that gives not only the name of the recipe, but also a thumbnail picture of the finished dish. Already, the magazine is organized better than the website!

Of the given recipes, I am more than likely to try to following:
Of the features, I was really interested in the "behind-the-scenes look" of a taping of an episode of Iron Chef America, broken down by descriptions of what happens, when it happens. Apparently, it is true that all Iron Chefs and challengers receive a potential list of "secret ingredients" for each battle well in advance of taping so they have sufficient time to develop and practice their recipes. They won't know the actual secret ingredient for their battle until it's revealed at taping. In addition to the 250 ingredients stocked in the pantry, each chef is allowed to spend up to $500 on "wish-list items" that aren't in the pantry. Hmm... What you don't get a sense for by watching the show on television is the fact that each chef has a full hour to present their dishes to the judges. That all amounts to quite a day for all involved!

After reading the premiere issue of the Food Network Magazine, will I be setting aside a portion of my hard-earned money to pay for a full subscription? Probably not. Will I ever read future issues of the magazine, say, while browsing through the offerings at my local newsstand? Perhaps. But if I allowed the premiere issue to sit on my desk for nearly a month, and then nothing in the issue compelled me to get up off my couch and into the kitchen once I finally did read it, chances are I'll leave it before I take it.

Has anyone else read the first issue of the Food Network Magazine? What did you think?

Shelby said…
I did get it and I wasn't too impressed...and I paid for mine! No, I wouldn't subscribe to the magazine myself...not going on the first issue. If I see it in the store and after glancing through, decide I would like it, then maybe I would buy it, but I am not compelled to subscribe.
December 30, 2008

FOODalogue said…
Didn't even know anything about it. I watch FoodTV all the time and they're not advertising it (that I've seen). I'll leaf through it the next time I'm in B&N or Borders. Anyway, big thanks for breaking out the-behind-scene info on Top Chef. I've often wondered about that.
Happy New Year to you and yours.
December 30, 2008

Michelle Rittler // Taste As You Go said…
HoneyB - I'm glad it wasn't just me who felt the magazine was lacking something special... something that would make me want to buy another issue! Sorry you had to shell out money for it. :-(
December 30, 2008

Michelle Rittler // Taste As You Go said…
Joan - Honestly, if my friend Eudora hadn't told me about it, the magazine's existence would have escaped my attention completely. I'm surprised to hear that the actual Network isn't advertising it more readily. You'd think they'd devote every other commercial to it!

Unknown said…
i wonder how far the food network will be able to take the celebrity chef interest. it seems to be taking over the world! on the web, in restaurants and retail stores, celebrity books (and cookbooks which are great), tv, now magazines. they are like the walmart of food (which i guess isn't necessarily a bad thing) but it's as if they are taking the money-making marketing machine to an extreme level. is it all about the food or about the marketing of a celebrity chef?
December 30, 2008

Sue said…
I've been meaning to blog about it for ages. I was very surprised, actually stunned, at how much I liked it. There were various features that were amazingly good.
AND I paid full price for it...

Happy New Year! Keep up the blogging. You're doing great! I'm glad I got the chance to meet you this year.
December 31, 2008

Michelle Rittler // Taste As You Go said…
Devon - I'm sure that the idea of the celebrity chef will, like everything else that has been en vogue at one point or another, eventually run its course. For me, when it comes to expanding my knowledge about food and to expanding my culinary repertoire of recipes, it's NOT about which chef prepared the recipe first. I'd love to see more shows on the Food Network (or features in the magazine) having to do with the home cook!
December 31, 2008

Michelle Rittler // Taste As You Go said…
Sue - I was wondering what you thought about the magazine! I guess I was just expecting more from it, though I'm not entirely sure why!

sj said…
I've not seen the magazine yet.. though I do want to one of these days.

Joie de vivre said…
So good to read your review. I saw the magazine at an airport and didn't pick it up because I wasn't impressed with the cover art. Your review confirmed my initial impressions!
January 01, 2009

Michelle Rittler // Taste As You Go said…
Jo - Let me know what you think when you've had the chance to check out the magazine!

I hope you enjoyed your New Year's celebration, whatever you chose to do. Happy blogging in 2009!
January 01, 2009

Michelle Rittler // Taste As You Go said…
Joie de vivre - When I was typing up my review of the magazine, I, too, thought the cover could have been more enticing. Granted, the slice of pie looked amazing, but nothing about that cover was screaming at me to pick up the magazine sooner than I did!
January 01, 2009

Lys said…
I have to agree with you re: the FNWebsite. The redesign drives me nuts. I do like the magazine but I'm still on the fence re: subscription. I guess we''ll see with the next issue or two if it's worth it or not.
January 04, 2009

Michelle Rittler // Taste As You Go said…
Lys - You'll have to let me know when the next issue is out so I can check it out at Barnes & Noble or something! I'm assuming it'll be out soon since the inaugural issue was dated November/December...
January 04, 2009

Elizabeth said…
I am looking to buy off anyone who would be willing to sell me their copy of the first issue (Nov/Dec 2008) of the Food Network Magazine. My 75-year old mother loves it and wishes she had the first issue, so I am trying to make her wish come true! Please help me! Thank you so much! E-mail me at surin@msgimmigration.com
THanks again!
June 05, 2009

Michelle Rittler // Taste As You Go said…
Elizabeth - Thanks for your comment! Unfortunately, I no longer have that first issue of the Food Network Magazine. I donated it to a friend who wanted to check it out.
June 06, 2009