Dining with New Friends at Osteria 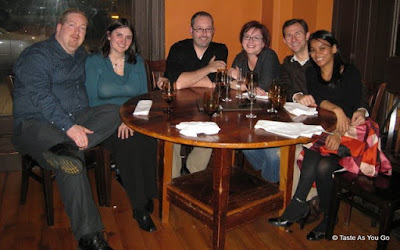 I think it's fitting that my first restaurant review of 2009 focuses on a restaurant that's not located in one of the five boroughs of New York. What seemed like a daunting task (making dinner reservations for six people around Christmas time) turned out to be, surprisingly, no big deal. All of the details just magically fell into place, and, before we knew it, Stephen and I were set to have dinner at Osteria in Philadelphia with two of his friends, Rob and Terry, and their respective wives, Pere and Janice. 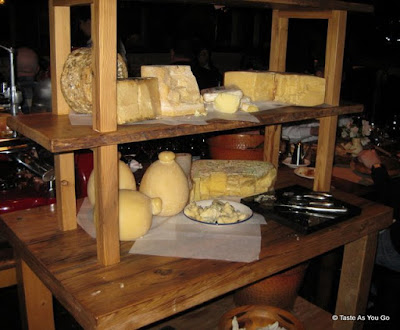 Stephen and I arrived at the restaurant first. After checking our coats, we walked past the cheese display and headed over to the bar to enjoy a drink while we waited for the rest of our party to show up. When they did, the hostess took our drinks, put them on a lovely silver tray, and instructed us to follow her to our table at the back of the restaurant. Just as we were speculating as to why diners weren't allowed to carry their own drinks to their tables - no drinking and walking allowed? walking and drinking led to spilling? - our hostess accidentally spilled Rob's martini as she was setting it down on the table. We tried to tell her not to worry about the spill, but you could tell she was embarrassed that it happened. Just as quickly as it did, the spill was wiped up and Rob and Pere were given fresh place settings.

Since there were so many delicious-sounding dishes on the menu, we decided to share everything so we could try as many of them as possible. 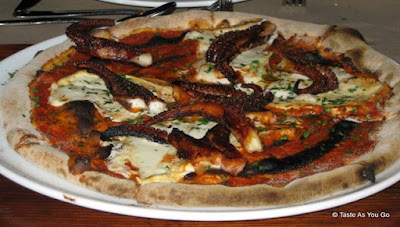 We were feeling a little adventurous and immediately agreed to try the Polpo Pizza, prepared with octopus, tomato, red chili flakes, and smoked mozzarella ($17). That's right! A pizza topped with crispy octopus tentacles. The bit of heat from the chili flakes and the smokiness of the cheese accentuated the flavor of the octopus nicely. 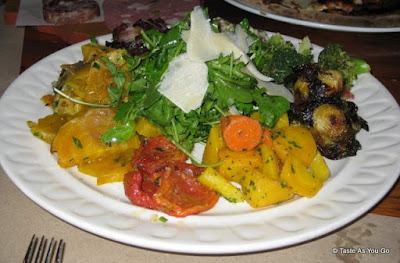 To balance out the non-traditional (to us) choice of the octopus pizza, we took the recommendation of our waitress and ordered the roasted vegetable antipasto platter, one of the specials for the evening. A heap of lightly dressed arugula topped with shaved Parmesan cheese, surrounded by an assortment of oven-roasted vegetables, ranging from broccoli to brussel sprouts to yellow beets to tomatoes. We also shared the House Cured Salumi Plate with Artichoke Mostarda ($14) and the Celery Root Fritelle with Apples, Parmigiano, and Thyme ($12). The artichoke mostarda was absolutely intriguing, with a sweetness that morphed into something with more of a bite, something akin to wasabi. All of it was delicious, and we had to remind ourselves that we had another course coming! 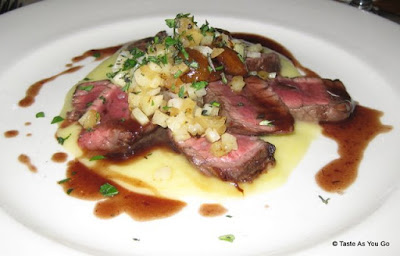 I had a difficult time choosing my entree but finally wound up picking the Wood Grilled Venison Leg with Parsnips, Apples, and Chestnuts ($29). Cooked perfectly and, I think, a favorite among the group. If it weren't considered inappropriate and if I hadn't just met the people I was eating with, I probably would have tried to lick every last bite of sauce off my plate. Yeah, it was that good. 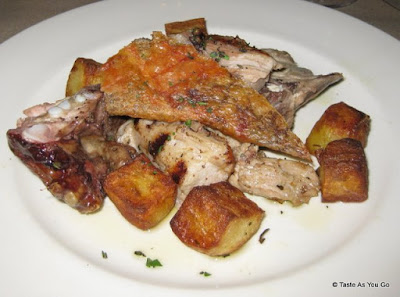 Stephen ordered one of the entree specials, a whole-roasted baby pig. Of course, he wasn't served the entire pig, but select cuts, including an incredibly tender shoulder. Initially, we thought the dish could have benefited from a sauce of some sort. That was, until we had a bite of the crispy skin that topped the cuts of pig. The crispy skin was the sauce. 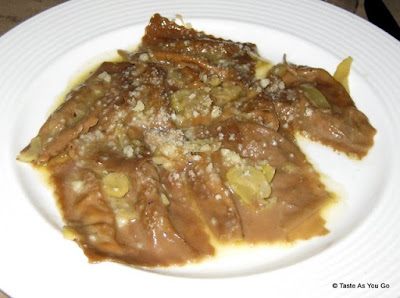 Janice and Pere both ordered the Doppio Ravioli with Chestnuts and Spit-Roasted Duck ($16). I didn't think to ask, but I'm pretty sure the pasta dough had chestnuts in it, as well. And while the bite I tried tasted good, I think the dish was lacking in presentation. With such a high concentration of brown hues on the plate, a sprinkling of fresh parsley would have made the food pop. 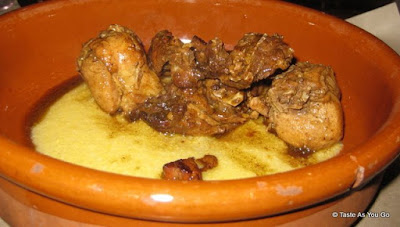 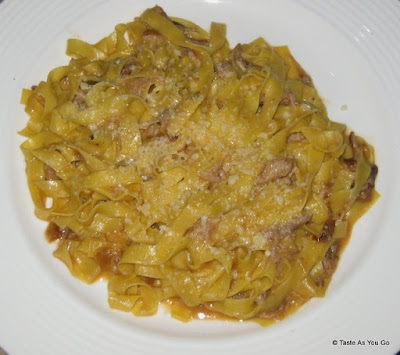 And, not to leave any animals out of our meal, Rob and Terry each ordered dishes featuring rabbit. Rob had the Rabbit "Casalinga" with Pancetta, Sage, Brown Butter, and Soft Polenta ($26) while Terry had the Fresh Homemade Fettuccine with Rabbit. (I'm actually not sure what Terry's dish was officially named, but I think that's pretty accurate.) With all that we managed to eat up to that point, it's any wonder that we had room left for dessert! 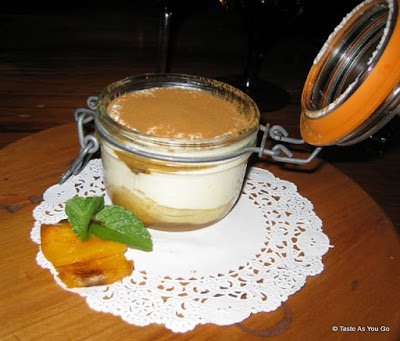 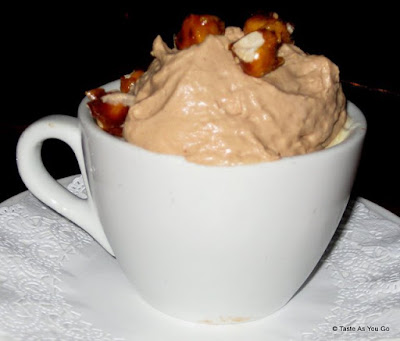 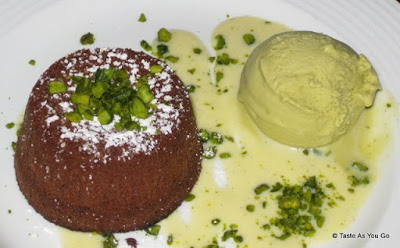 After ordering up a round of Madeira and port (why not, right?), we dug into our desserts: Persimmon Tiramisu ($10); a Cappuccino-style dessert topped with a mousse and chopped hazelnuts (again, the exact name of the dish escapes my memory); and a Chocolate Flan with Pistachio Gelato ($10). The persimmon added an interesting twist to the tiramisu, and I loved how it was presented, in a jar that was sitting in the middle of a doiley on a pizza paddle. Since I'm allergic to whole hazelnuts, I had to skip tasting the "cappuccino," but Stephen admitted that the entire meal was worth that one dessert, so it must have been pretty damn delicious! And, well, we ordered the flan to make sure we had some type of chocolate representation in our dessert course!

We were all sufficiently stuffed and beyond pleased that the evening turned out to be such a success. So, here's to Marc Vetri, Jeff Michaud, and Jeff Benjamin for their brilliant restaurant; to Stephen for choosing it; and to Rob, Pere, Terry, and Janice for enduring my photo-taking throughout the meal! I know that Stephen and I are looking forward to making this dinner an annual holiday event!

Unknown said…
aah, i loved osteria, i went for my last night out in philly!!! that choc flan with pistachio gelato was totally worth feeling excrutiatingly full for :)
January 03, 2009

Michelle Rittler said…
ttfn300 - Osteria is definitely a place I'd choose to celebrate a special and memorable occasion! Brief discomfort from eating way too much is definitely worth it for their food! :-)
January 03, 2009

sj said…
I've been to Osteria and love it! I am so glad you got to experience it! Your review was lovely to read :)

And you looked beautiful :)

Michelle Rittler said…
Jo - Aww, thanks!! I'm really glad we went to Osteria, too. Who knew my boyfriend was so talented when it came to picking new-to-us restaurants to try!

Shelby said…
Grumpy and I would so go for that venison dish!
January 04, 2009

FOODalogue said…
I love the idea and look of that polpo pizza!!
January 04, 2009

Michelle Rittler said…
Shelby - I can't explain it. Something about the description of the dish on the menu just drew me to the venison, and I had to order it!
January 04, 2009

Michelle Rittler said…
Joan - Looking back, I should have tried to pizza first. By the time I got around to eating a slice, the pizza was at room temperature. I liked it a lot, but I have a feeling I would have liked it even more if it were hot when I tried it!
January 04, 2009

Sue said…
I love your reviews. They're so complete and I really get a good feel for the restaurant. Great job! I have to try Osteria.

Michelle Rittler said…
Sue - Thanks for the compliments and for the shout-out! I'll go check out your post while I eat dinner. :-)

Lys said…
Osteria is on my "bucket list" of restaurants to try. As I'm in Philly often, I've heard nothing but great things about it so I'll have to schedule that for the next trip. Great review and photos. Have you read Marc Vetri's new cookbook?
January 04, 2009

Michelle Rittler said…
Lys - I have a "bucket list" of restaurants to try, too. Though, they're all restaurants in New York. Looks like I'm going to have to start paying attention to stellar restaurants on a national level now!

I haven't read Marc Vetri's new cookbook yet. I've held it in my hands since my boyfriend bought a copy of it for his parents for Christmas, but I didn't buy a copy for myself.
January 04, 2009