Venezuelan Food at El Cocotero and the Giveaway Winner

The Lehigh Dinner Club (LDC) attempted to enjoy the cuisine of Ethiopia at Queen of Sheba in April but, unfortunately, struck out at the plate. (Haha!) So, for our May meeting, Kym chose to leave Africa behind and had us travel to South America to try the Venezuelan food at El Cocotero, a small restaurant in Chelsea that you'd probably walk right past without noticing if you weren't looking for it.

To hold us over while we waited for Brian to arrive, Kym and I ordered some appetizers. After looking at the various arepas on the menu, I was intrigued by the Cazon because of the words "baby shark" next to it. Having never eaten baby shark before, I asked our server whether he liked it. He made a face because he, personally, didn't like the consistency or texture of it, but he assured me that, if I "liked that sort of thing," I'd enjoy it. I couldn't get the image of his face scrunched up in distaste, so I skipped the Cazon and ordered the Tequeños ($4.95), which are traditional Venezuelan crispy cheese sticks. Fried cheese? I was sold! Kym the Pastelitos ($3.95), a round fried pastry, with ham and cheese. 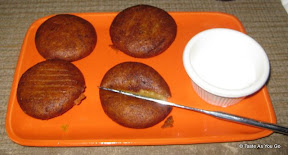 Brian arrived just as we placed our appetizer order, so he took a few minutes to study the menu and ordered one as well - the Arepitas Con Nata ($4.95), four bite-size crispy arepas stuffed with something that had a subtle sweetness to it. I'm guessing it was plantains based on the color of the arepitas after Brian cut into them.


For our main meals, Brian, Kym, and I all ordered Arepas. I got the Pabellón ($7.25), which was stuffed with sweet plantain, white cheese, black beans, and shredded flank steak. I'm still convinced that I chose that one because the name of it reminded me of Red Sox pitcher Jonathan Papelbon, and we all know how much I love those Red Sox! While the Pabellón was very flavorful, it was slightly awkward to eat because I couldn't bite through the shredded flank steak very easily. Whole pieces of the steak slid out of the corn pancake and were left dangling from my mouth. (Very ladylike, right?) I eventually gave up on biting into it and used my fork and knife.


Kym opted for chicken and ordered the La Catira, which was filled with shredded chicken and yellow cheese. The bite I had was really good -- the chicken was tender and it wasn't too cheesy. Unfortunately, I can't remember which two Brian ordered and the picture was lost (womp womp), so I'm hoping Brian leaves a comment to let you all know what he had! (Sorry, Brian...) While the arepas were very filling, I wished they were a little cheaper. If I hadn't had the Tequeños to start, I would have still been hungry after finishing the Pabellón. In fact, we were all still a little hungry after eating our arepas, so, of course, we ordered up some dessert.

I have one more LDC restaurant to write-up (dinner at Smorgas Chef @ Scandinavia House) and then I'll be caught up with those. Hopefully, I'll be able to write it before the LDC meets again!

And now, without further ado, it's time to announce the winner of the Barefoot Wine & Bubbly Summer Beach Giveaway! I know I was supposed to announce the winner yesterday, but I was having too much fun enjoying the relative quiet of Manhattan on a holiday weekend with my boyfriend to allow myself to be chained to my laptop on an absolutely gorgeous Saturday. I apologize for the delay!

There were 22 entries for the giveway. Random.org tells me that the winner is #8:

Amie: "I love champagne so I want to try the Extra Dry but the Bubbly Pinot and the Bubbly Chardonnay sound really good too!" I like being barefoot anywhere.