Try the Balls at Smorgas Chef

For the June meeting of the Lehigh Dinner Club (LDC), Brian, Kym, and I had some very special guests join us at Smorgas Chef at Scandinavia House. As you may know, the three of us are not only alumni of Lehigh University, but we are also alumni of the Wind Ensemble. Since the inception of the LDC, we've been talking about inviting our ensemble director to come out for dinner with us, and, miraculously, he had a hole in his schedule in June. Prof. Diggs suggested that we also invite Sara, another fellow Wind Ensemble survivor alum, so we wound up being a party of five that night. 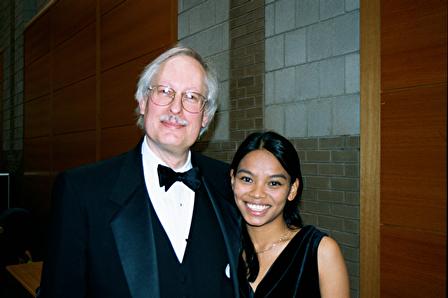 Smorgas Chef offers a very reasonable three-course prix fixe dinner menu for $29, from which Brian, Sara, and I all ordered. While Sara chose the Composed Salad of Mixed Lettuces as her first course, Brian and I decided not to mess around. We were going all-in and both ordered the Smorgas Seafood Chowder, made with mussels, cod, salmon, shrimp, and a dash of cream.


Based on the richness of the chowder, I'd say they used more than just a dash of cream! All of the flavors melded together exquisitely in that dish, and although it sounds like an extremely heavy way to begin a meal, the chowder was oddly refreshing.


Kym, Sara, and I ordered the Swedish Meatballs & Lingonberries ($16, when not ordered as part of the prex fixe dinner), served with chive mashed potatoes, carrots, zucchini, and grädd sauce, for our entrees. To be honest, the fact that Swedish meatballs were on the menu was the sole reason why I chose Smorgas Chef as the LDC's June restaurant. Blame the decision on random cravings.

While we were waiting for our entrees, we jokingly suggested that the Swedish meatballs at Smorgas Chef were exactly the same as the meatballs served at IKEA. But when our food arrived, we realized that the ones served at IKEA just didn't compare. These Swedish meatballs were plump and moist and absolutely delicious! Take my advice - try the balls. Even if you only order them as a first course ($9). They will satisfy you and make you happy. I promise.


Prof. Diggs insisted on ordering the Smorgas Board ($15) for his entree because he had to have gravlaks. Also included with the Smorgas Board was pickled herring, Swedish meatballs, and the "traditional accompaniments." We asked our server at the time what the accompaniments consisted of, but, of course, I can't remember what he said. If I were more knowledgeable about Scandinavian cuisine, I might have been able to figure it out just by looking at the picture I had Prof. Diggs take of his plate. Alas...


Seeing as Kym, Sara, and I all signed up to try the balls, Brian stayed clear of them and ordered the Crisp Seared Salmon, served with sorrel mashed potatoes, oyster mushrooms, and juniper sauce. Even though I'm still slowly allowing myself to eat salmon again (a recipe gone horribly, horribly wrong ruined salmon for me for years), I accepted the piece of fish Brian offered to me to try. The salmon was cooked perfectly and the juniper sauce really accentuated the subtle flavor of the fish. When I'm ready to reunite with a whole piece of salmon and not just a bite of it, I'd consider coming back to Smorgas Chef for this dish.


By the time dessert came out - we all ordered the Scandinavian Soft Vanilla Waffles with cloudberry preserve and chantilly cream - I think we were all wondering if it were physically possible to stuff more food into our bodies. Thankfully, we came to our senses and wound up sharing the desserts. That turned out to be a brilliant plan since the sweetness of the cloudberry preserve would have prevented any one of us from polishing off a waffle without assistance.

A friendly and attentive waitstaff, a spirited conversation, a bottle of Prosecco, and a beyond fantastic meal made our evening at Smorgas Chef an incredible success. Hopefully, Prof. Diggs and Sara will want to join us for more LDC meetings in the future!

If you could have dinner with one of your college professors, who would you choose?