Whenever I pick up the phone for Chinese take-out, including Scallion Pancakes in the order is an absolute necessity. Sometimes, when I'm really craving them, I'll order enough food to hit the minimum total for free delivery without an immediate intent on eating the rest of the food. I'll tear into the Scallion Pancakes as soon as I've paid the delivery guy and closed the door but will put the remaining food in the refrigerator for later.


After realizing how silly my take-out ritual seemed, I told myself it was time to start making the Scallion Pancakes at home. I was throwing away money on food I didn't really want just to satisfy a craving, and in these economic times, that's not such a wise thing to do. I dug through my cookbooks and did some research online to learn how one actually creates Scallion Pancakes and was pleasantly surprised by how easy the process was. Better yet, you only needed a handful of ingredients. 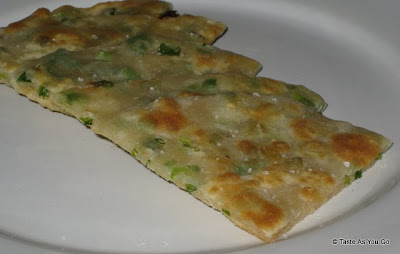 The first batch came out so delicious that I immediately made a second batch. The Scallion Pancakes were packed with fresh onion flavor that wasn't overpowering and the texture of them was crispy rather than oily or soggy. When I saw how my Scallion Pancakes turned out, I started wondering why so many Scallion Pancakes served in restaurants are so greasy, as my recipe called for very little oil. No matter. Now that I know how to make Scallion Pancakes at home, I doubt I'll ever order extra Chinese food for delivery just to get my hands on them again!

Do you have a take-out weakness? What kind of food do you order on a regular basis?