Grab Some Friends and Wait in Line at Shake Shack


It occurred to me that I have lived in New York City for three years. (Those three years include the 6 months I lived in Connecticut but commuted to the city for work.) And it took me three years to make my way down to Madison Square Park to meet up with Kym and Brian for dinner at Shake Shack. When I lost my job in August, the three of us originally decided to put our Lehigh Dinner Club meetings on a hiatus, but then Kym suggested we temporarily rename the club "Lehigh Dinner Club on a Budget" and that we have dinner in the park while we could still take advantage of the beautiful weather. Hiatus, be damned!


The line wasn't terribly long when we arrived, which was good since I didn't have a chance to check the Shack Cam beforehand. I doubt a long line or a long wait would have mattered, though, since we spent the time catching up with each other's news and I spent part of the time looking up and taking pictures.


The three of us felt very triumphant when we reached the first sign. Brian and Kym were such good sports when I asked them to stand by the sign and look like tourists. 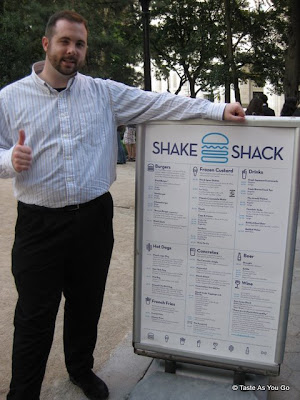 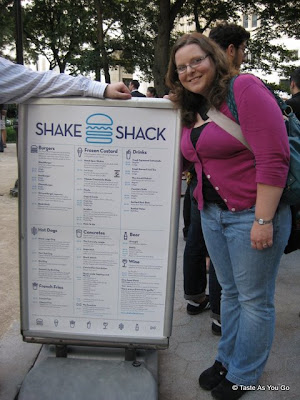 I had a hard time deciding what to order. Of course, I did my research before going. Ordering a burger was a given. I also knew I had to include some type of frozen custard. I thought I had it all figured out in my head... Until I saw that sign. The list of food I had planned on ordering flew right out of my head and I got overwhelmed by all of the choices all over again. I thought to myself, "How much food can my little stomach handle?" I didn't have time to answer, though, because I heard the word "Next!" called out to me from inside the Shack and it was my turn to order.

As you can see, I went all out. Considering it took me three years to visit Shake Shack for the first time, I knew it would probably be a looooong time until my second visit. So I ordered everything my stomach wanted - a Double Single Cheeseburger with lettuce and tomato ($4.25), Fries ($2.75), The Arnold Palmer to drink (regular, $2.25; large, $3.00), and a Hopscotch Concrete ($6.25) for dessert! It sounds like a lot of food, but the portions weren't ginormous, so I managed to finish it all. And, I'm really glad I didn't skip the Concrete! The frozen vanilla custard was mixed with hot caramel sauce, chocolate toffee, and Valrhana chocolate chunks. Heaven!

If you haven't done the Shake Shack thing yet, I recommend you give it a try. Bring along some friends to keep you company while you're in line and indulge in a little comfort food. Burgers and fries? Now, how bad can that be?