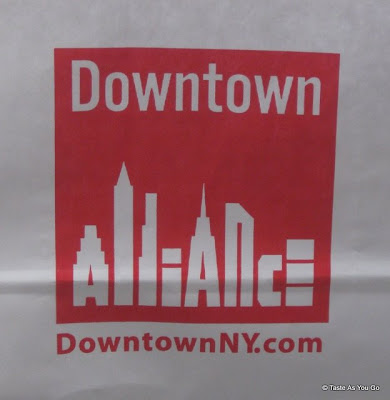 My friend Candice and I got the inspiration for our third "let's explore a neighborhood in New York" adventure during a discussion we were having with one of our sorority sisters, Michelle, at our Book Club meeting back in September. Michelle, knowing I was a food blogger and always on the lookout for affordable things to do in the city, suggested that we sign up for a Downtown Eats Food Tour sponsored by the Downtown Alliance. For $25 ($26.62, including service fee), you're guided on a culinary tour through Lower Manhattan that also includes a little bit of history about the stops along the way and about the neighborhood itself. Candice and I signed up for a tour right away. [Note: The tickets prices for these tours has increased since I went. I originally paid $20 for my ticket ($21.49, including service fee).] 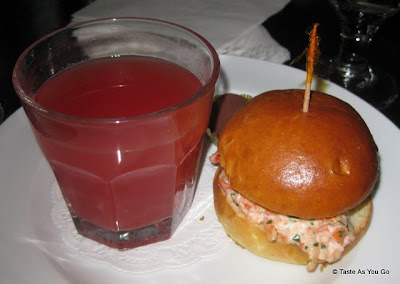 
The first stop on our food tour was Trinity Place on Broadway for Mini Lobster BLTs and Watermelon Aqua Fresca. The idea of starting the tour with a bit of lobster seemed decadent to me and I was excited because I never thought to put lobster on a BLT. Unfortunately, I think I set my expectations too high because I was ultimately disappointed with the sandwich. If you look at the menu online, the Lobster BLT is described as consisting of "tender lobster meat, smoked country bacon, [and] oven roasted tomatoes on onion brioche." Sadly, the lobster we had was mixed into a salad that had way too much mayonnaise for my liking and the bacon was cooked to the point of chewy rather than crispy. When I tried to bite into the sandwich, the entire slice of bacon slid out from between the brioche (which was not onion) and hung there, awkwardly, from my mouth.

To be honest, I was more impressed with the history of the restaurant than I was with the food we sampled. Trinity Place was built between the two 35-ton bank vault doors of US Realty Bank, which dated back to 1904. 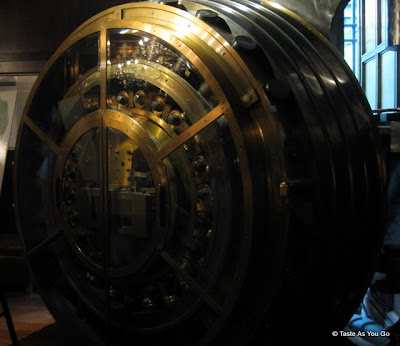 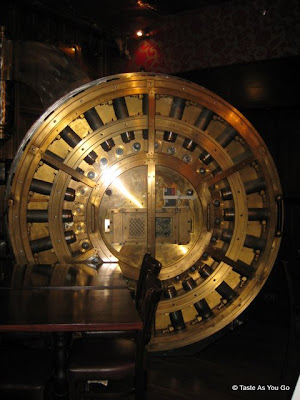 Trinity Place also houses a unique wine storage area. They created the "cellar" out of the old bank elevator. 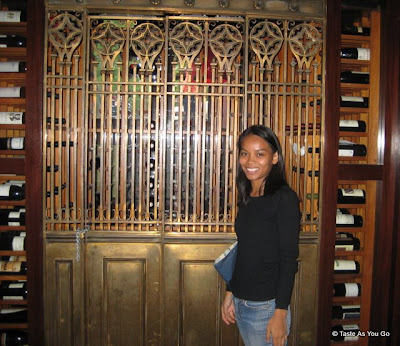 While I wasn't a fan of the Mini Lobster BLT, I do want to go back to Trinity Place and have a go at their full menu. They have a dish on there now - Duck Confit with Butternut Squash Risotto, served with Chanterelle Mushrooms, Parmesan Reggiano, and Porcini Jus - that sounds delicious and the perfect way to celebrate the flavors of fall. 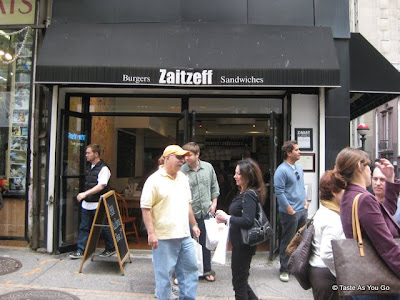 We made our way from Trinity Place and over to Zaitzeff, a tiny little nook on Nassau Street and the second stop on our tour, for some Sliders and French Fries. As we were waiting for the Sliders to be cooked, we had the opportunity to listen to owner Amine Zaitzeff discuss the history of the restaurant and their policy about the food they serve to their customers. 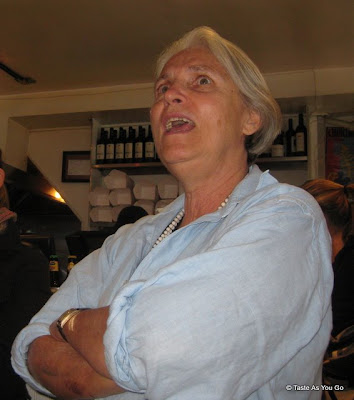 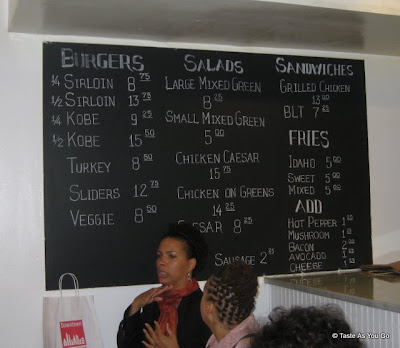 A glance at the prices on the menu board at Zaitzeff might make some people uneasy and might cause them to turn around and walk right out the door in search of food a little more affordable. But what the menu board on the wall does not say is that the American-style Kobe beef comes from a ranch in Nebraska, that the grass-fed sirloin is ground on the premises daily, that the chicken is organic, and that the fries are hand-cut and not deep-fried. In fact, Amine told us that they use cast-iron skillets to cook the French fries so they can change the oil daily. Those prices are higher because you're paying for high-quality ingredients and food that tastes like it should taste. 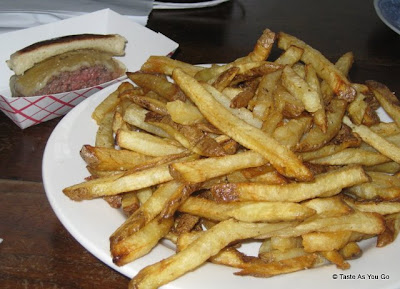 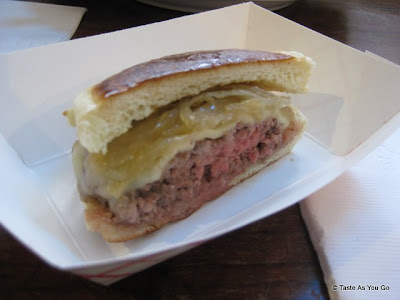 Meaning, the French fries tasted like potatoes and the meat of the Slider tasted like beef. I don't get to eat grass-fed beef very often, so the difference in taste between that and the stuff I generally feed myself at home was very noticeable. I can't wait until I can afford to buy grass-fed meat on a regular basis. (Pray that I find a new job soon!)

Zaitzeff was out of slider buns when our army arrived, so our Sliders were served on Portuguese muffins. The slight sweetness of the muffins complemented the beef nicely and reminded me of the Portuguese sweet bread that I'd eat at my grandparents' house in Rhode Island. And, before you freak out, that plate of fries was for four of us to share. I didn't eat all of them myself. Two enthusiastic thumbs up for Zaitzeff! Our third stop on our culinary tour was a shop on Liberty called The Greene Grape for a mini wine tasting. (It is at this point that I should probably mention that bringing a bottle of water with you on the tour is a good idea. While we were treated to the Watermon Aqua Fresca at Trinity Place, we didn't have anything to drink at Zaitzeff.) I appreciated the wine tasting, but my body really wanted water. Of course, I was so busy chatting with Candice and some of our new friends that I completely missed Seth Datz's explanation of the wines we were tasting. (Seth is the Manager of The Greene Grape.) But we did stop talking long enough to get our picture taken. Aww. 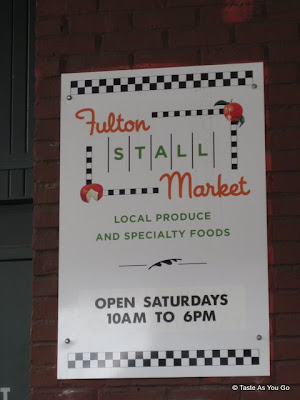 It turns out the wine tasting stop at The Greene Grape was well-timed. It gave us something to warm us up before we made the windy trek over to the Fulton Stall Market at the South Street Seaport for our next treat - Cider Donuts from Stony Hill Gardens and Market in Chester, NJ. 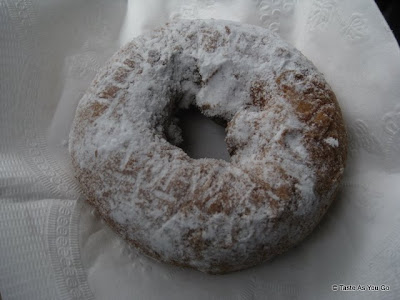 The donut, itself, was just okay. A little on the heavy side and not exactly screaming with any flavor resembling apples or apple cider. In fact, I could only eat half of it because chewing the donut dried out my mouth. I'm thinking that donut would have paired perfectly with a cup of hot apple cider. Alas, no beverages at this stop. 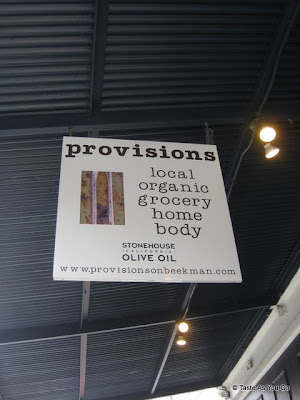 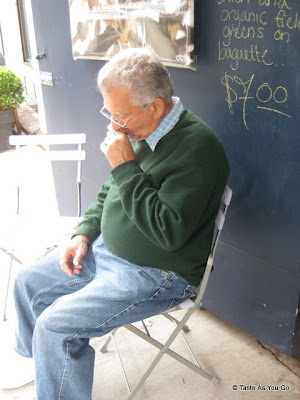 A quick walk around the corner from the Fulton Stall Market brought us to our next stop, the natural grocery store Provisions, where we had the chance to sample some baked goods made with Stonehouse Olive Oil. Owner Megan Cariola baked us an assortment of treats that featured olive oil as one of the ingredients: Triple Chocolate Chip Cookies, Oatmeal White Chocolate Cranberry Cookies, and Banana Almond Bread with Cream Cheese. 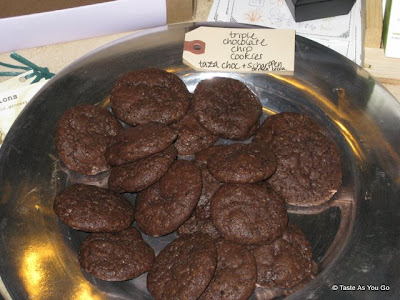 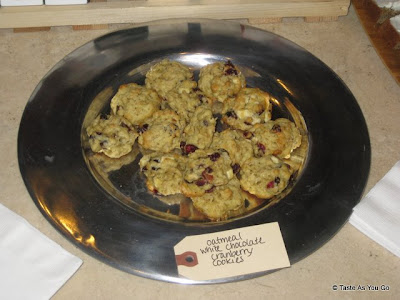 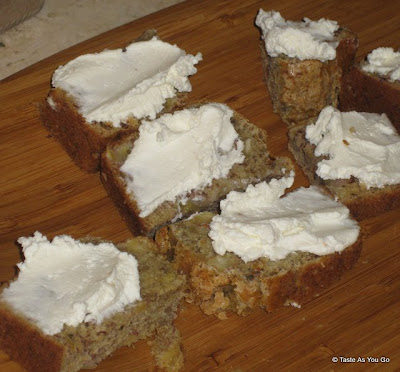 I had heard it was possible to bake with olive oil but had never tried anything that was actually prepared that way. I had to skip the Oatmeal White Chocolate Cranberry Cookies due to my cranberry allergy, but the Triple Chocolate Chip Cookies and the Banana Almond Bread with Cream Cheese were deliciously moist. 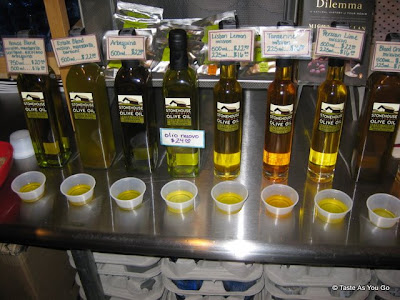 After eating my cookie and piece of bread, I wandered over to the olive oil tasting station, where Megan had set up little containers of flavored olive oils for us (and anyone else who visited the store) to try. I was starting to get full from the food we had been eating all afternoon, so I didn't try any of the olive oils. I do know, however, that I want to try the Blood Orange Olive Oil and the Persian Lime Olive Oil at some point in the future. 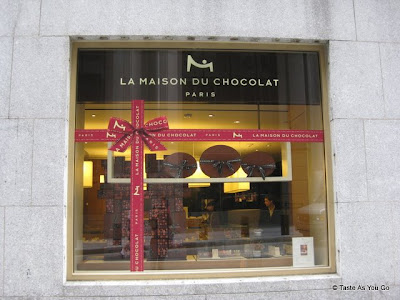 We left Provisions and headed over to La Maison du Chocolat on Wall for yet another helping of sweets. Between the Cider Donut and the other baked goods, I was actually starting to crave another round of Sliders and French Fries from Zaitzeff, something savory to break up the string of sweet foods we were eating. But we were all brave little soldiers and marched out of the cold and into the store to sample La Maison du Chocolat's Pate de Fruit, a Chocolate Truffle, and a piece of Chocolate-Covered Ginger. I tried taking pictures of the candy but they didn't turn out too well. Although the candy tasted amazing, the pictures of the lumps of chocolate on a paper napkin in my hand did not look appetizing. So, the pictures wound up in the digital trash can. 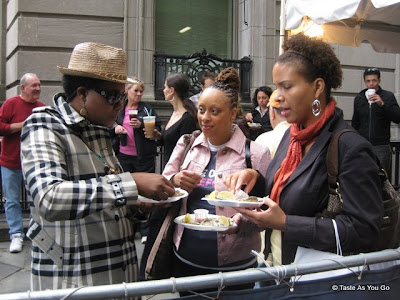 You'd think the tour would end with the chocolate at La Maison du Chocolat, but we had one more stop. We were lucky enough to be on the tour that ran on the same day as the Stone Street Oyster Festival, so we ended with oysters and Guinness. 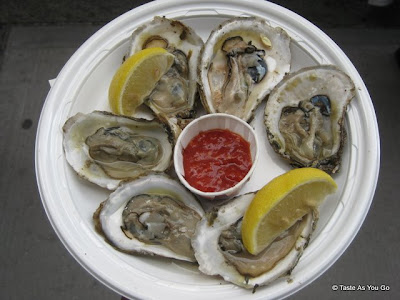 I didn't think my stomach would allow me to eat any more food. After all, we had just spent three hours walking around.... eating. (We were told to budget 2.5 hours for the tour. Knowing what I know now, I would budget more than that.) As full as I felt, I just couldn't waste the opportunity to dine on fresh Long Island oysters - cool and smooth with a slight gritty texture from the salt water and the sand. I skipped the Guinness because I didn't want to wait in line for it and because my fingers were starting to go numb after being outside for that long, but I ate every last oyster allotted to me. Yum!

The Downtown Alliance will be offering their Downtown Eats Food Tours through December. If you're looking for something affordable to do on a Saturday afternoon consider signing up for one or more. The tours are changed up a bit so not every tour will stop at the same exact places. If you're interested, I'd recommend contacting the Alliance to see if they can give you a tour itinerary before you pay for your tickets.

So, be adventurous. Go out and explore a new neighborhood. You never know what goodies you might come across along your way!