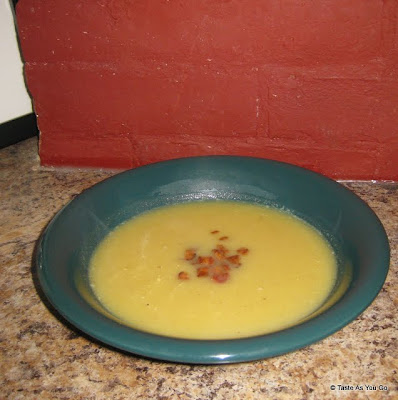 I went to the market a couple of weeks ago with a simple plan in mind: pick up milk. One quart of 1% milk. However, when I entered the store and found myself standing in the middle of a very neatly arranged produce section, with all of the colors of the fruits and vegetables popping and pulling my focus from here to there to there, my simple plan flew right out of my brain.

I suddenly pictured my empty refrigerator crisper drawers and felt compelled to buy something, anything, to rectify the situation. I fell into the grocery store placement trap. 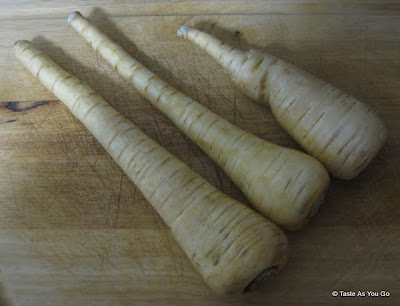 Two very lazy laps around the produce section later, I was finally walking to the back of the store to grab the milk. Only instead of walking underhindered, I was precariously cradling bags of Bosc pears, red leaf lettuce, beets, parsnips, and one lone avocado. Recipes for the beets and parsnips were already forming in my head, and by the time I reached the register, I knew that I wanted to make a soup with the parsnips. (I've been wanting to make soup ever since the arrival of my new immersion blender.) The only real problem with that idea was the fact that I had never cooked with parsnips before. 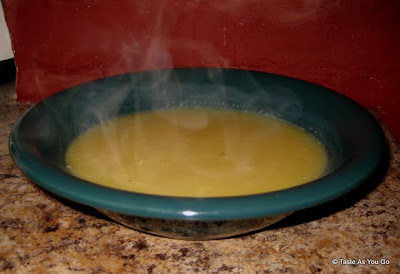 By look and smell, parsnips resemble carrots. Parsnips are paler in color but are often used interchangeably with carrots for their flavor. As soon as I peeled the parsnips, my nose was hit with the aroma of something sweet. I cut off a little piece at the end of one of the parsnips and took a taste. Like a carrot, but definitely sweeter and stronger.... more intense. What was I going to season the parsnips with to help bring out their flavor but downplay it at the same time? I wanted something slightly spicy and smoky. Then, without realizing it, my armed reached out and my hand grabbed the bottle of curry powder sitting on the "shelf" above my stove. Perfect! 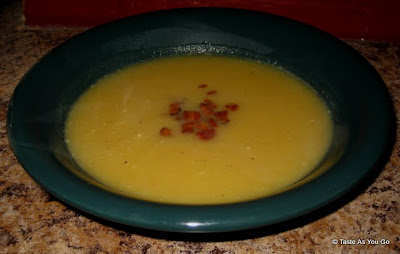 This particular blend of curry powder contained mustard, turmeric, coriander, cumin, and cloves, and it worked phenomenally well with the parsnips, giving them tremendous flavor and a rich color. To add another layer of depth to the flavor, I garnished the soup with fresh bacon crumbles and allowed the saltiness of the bacon to play against the sweetness of the parsnips. Honestly, the soup was amazing on its own, but the bacon really pulled all of the flavors together. And it was just the kind of light dinner I needed to warm me up on a cool, rainy, fall evening.