A Taste of the Caribbean at Ideya Latin Bistro

Do you know how difficult it is to schedule a dinner for four twenty-something women in New York City? I'll give you a hint. The last time I wrote a blog post about the adventures of the Phi Mu Dinner Club (PMDC), it was June. Um, hello... It's November now. I suppose that's what happens when one of us is in law school (Jena), one of us gets engaged (Linda), one of us gets a new job (Sarah), and one of us gets laid off (me). It took months and multiple instances of rescheduling to get us all in the same restaurant at the same time, but we were finally able to continue on our tour of world cuisine, ABC-style. 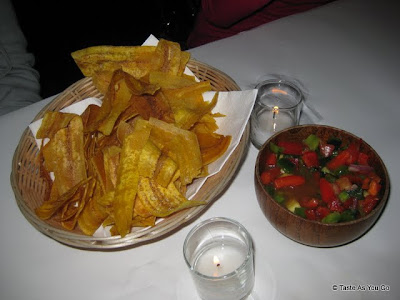 With "A" (Afghanistan) and "B" (Belgium) taken care of, we moved ahead on finding a cuisine for "C". Eventually, after tossing out the suggestions of "chocolate" and "cocktails" and "cookies" (no, we're not women...), we settled on Caribbean food because we'd have a lot of options. Ideya Latin Bistro in SoHo was the perfect choice! We sipped on pretty powerful cocktails while we perused the dinner menu and deliberated over which dishes to try and share. After making our decisions and putting in our order, we snacked on the complimentary crispy fried plantain chips and salsa. The plantain chips were delicious - slightly sweet and slighty salty - but I would have preferred a little more heat in the salsa.

Most of the dishes we ordered came from the Aperitivos section of the menu. None of us were terribly famished, so we thought splitting everything would be the best way to try a variety of dishes and the best way to keep ourselves on somewhat of a budget. Looking back, I think we may have gone a little out of control! 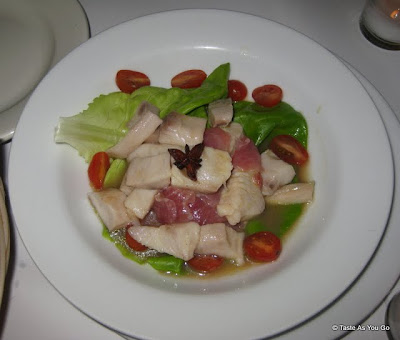 The Ceviche Caribe ($12) consisted of citrus-marinated tuna, mahi-mahi and cherry tomatoes that were all seasoned with star anise and tamarind essence. The flavors were clean and fresh and it made for a perfect starter. Especially considering the richness of the other dishes we ordered. 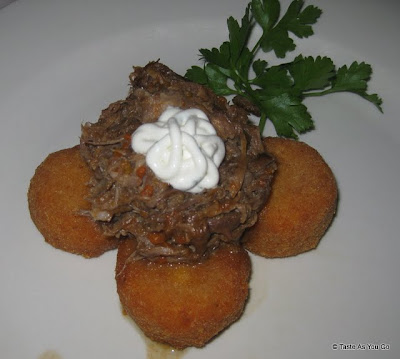 Like the Ropa Vieja de Pato ($11), Rioja-braised pulled duck with sweet potato croquetas and chive crema. This was, hands down, my favorite dish of the night and I immediately made a mental note to try and figure out how I could recreate this dish at home so I could enjoy it without having to make the trip to SoHo. The duck meat was succulently tender and just melted away in your mouth. And the pairing of the duck with the sweet potato croquetas made this an ideal dish for fall and made me reconsider my definition of "comfort food." It certainly made me forget that it had started to rain again earlier in the evening! 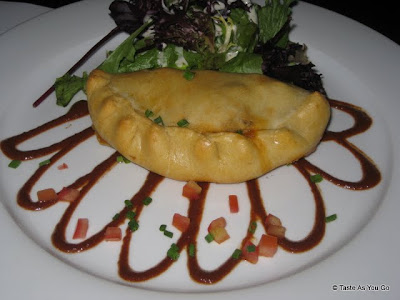 To make sure we incorporated beef into our meal, we also order the Empanada de Res ($10), which was filled with ancho- and cocoa-smoked short ribs and was served with a sour orange glaze. The four of us loved how gorgeous the empanada looked on the plate and hated cutting into it. But we got over it as soon as we tasted the filling... smoky and sweet and just as tender as the duck in the Ropa Vieja de Pato. I don't think we were disappointed with any of the food we had at Ideya Latin Bistro.

Even the side order of Tostones ($5) were delicious - simply prepared and not overly seasoned with salt. I'm glad Sarah suggested that we get a plate of them to share because it wouldn't really have felt like a Caribbean meal without them. 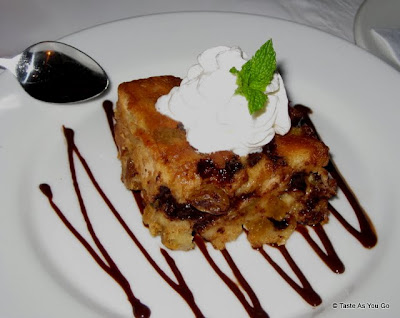 Although we were all full by the time our server cleared the table, we all dug down deep and ordered a piece of Chocolate Rum Bread Pudding ($9) to share. Typically, I'm not a fan of bread pudding because I don't like the consistency or the texture, but I went with the flow and jumped on the bread pudding wagon because everyone else wanted to try it. I'll be honest. What arrived a few minutes later didn't look like bread pudding to me. It was more like regular cake because it was drier than we all expected it to be. Tasty, sure... But I think this piece was from a tray that was left to bake a little too long.

Overall, an excellent meal. Throughout the entire evening, the restaurant was buzzing with the conversations of friends who were catching up, just like the four of us. It was hard to make the decision to leave because it was so warm and cozy in the restaurant and so cold and rainy outside. But, eventually, we bundled up and said goodbye to our little Caribbean retreat and vowed to make plans for our next destination dinner.