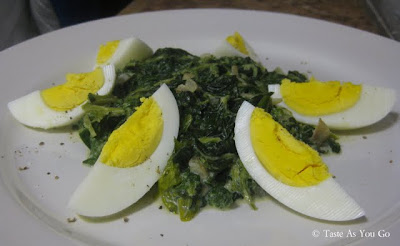 I'm laughing as I write this. Despite giving myself plenty of time to choose, prepare, and photograph my January submission for Gourmet, unbound, I still managed to miss the deadline for publishing. And this comes just two weeks after I publicly made my vow to be a better blogger! My excuse is a noble one, though -- I was spending quality time with my boyfriend while he was in New York celebrating the New Year with me. Sometimes, other things just have to come first. 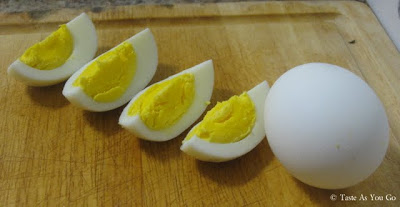 For my December submission, I chose a recipe that featured lemon and cream, but my recent obsession with having breakfast for dinner (or "brinner") was the driving force behind my choosing Hard-Boiled Eggs Florentine this time around. Under normal circumstances, I avoid Eggs Florentine because I'm not the biggest fan of poached eggs or the sauces that typically accompany them. But I'm trying to broaden my horizons. When I found this recipe, I was excited because the eggs were going to be boiled rather than poached, and I like hard-boiled eggs. 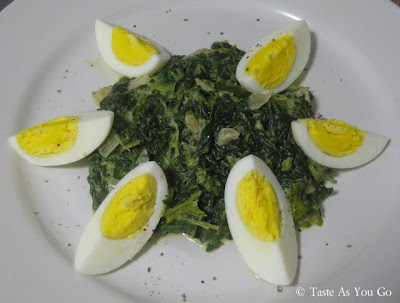 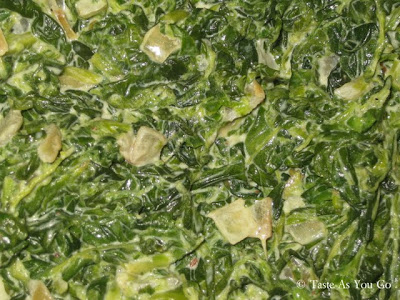 Unfortunately, after preparing the recipe, I was not pleased with the finished dish. While the spinach was creamy and delicious, the hard-boiled eggs seemed like overkill... an afterthought... mere decoration on the plate. In fact, the next day, when heating up the leftovers, I skipped the eggs altogether. Instead, I warmed the spinach up with a little extra cream and then tossed it with freshly cooked pasta. A slight improvement, but nothing about this recipe makes me want to make it again. Perhaps I did something wrong...

Oh well, they can't all be winners!


Recipe by Michelle Rittler, Taste As You Go | Adapted from Gourmet, January 2005