Take a Break from Meat at Josie's East 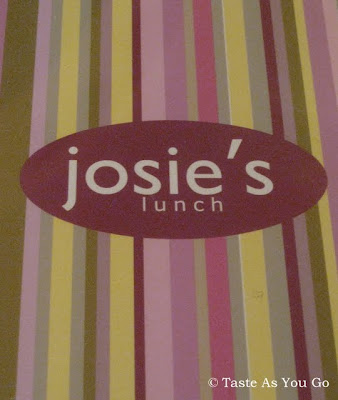 Every now and then, it's refreshing to eat a meal that doesn't include an ounce of meat. Not too long ago, I made plans with my friend Lorianne to take a break from work and meet up for lunch. She really wanted me to choose a restaurant since I'm the "foodie" (or "food enthusiast"), but I allowed her to make the suggestions because of her restricted diet as a vegetarian. Eventually, we agreed to meet at Josie's East on Third Avenue. Before I left the office to head to Murray Hill, I took a quick peek at the lunch menu and was pleasantly surprised to find a decent number of dishes featuring meat or poultry. But, for the most part, the dishes were vegetarian friendly or could be made that way upon request. 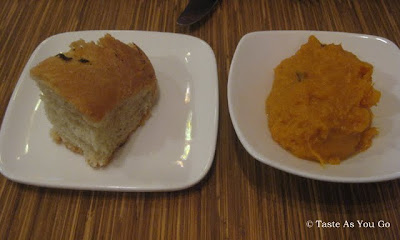 After we were seated, we took some time to look over the lunch offerings again. I was having a hard time deciding whether I really wanted a meatless meal. As I weighed my options, Lorianne and I devoured the complimentary bread and sweet potato spread that was placed on the table between us. Such an intriguing alternative to butter! Finally, I decided to embrace the wide-range of vegetarian choices on the menu and opted to take a break from meat. 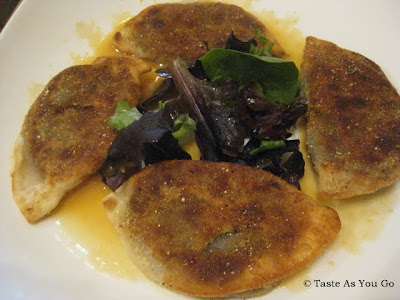 To start, Lorianne and I shared the Pan-Seared Spicy Organic Black Bean Dumplings ($6.75), which were served with a miso-mango sauce. I loved these! The spiciness of the black bean mixture inside the dumplings was tamed by the sweetness of the sauce, and in no time, we had cleaned the plate. I secretly hoped that my main dish was as tasty as our appetizer. 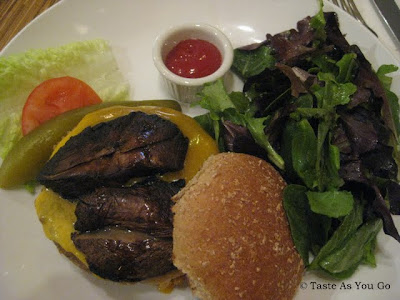 I ordered the Organic Three Grain Vegetable Cheeseburger ($13.25) made with quinoa, bulgur, and couscous. This burger completely changed my conception of what a "veggie burger" is. It was moist and flavorful and seasoned to perfection, and I really appreciated the extra meatiness from the slices of portobello mushrooms. I didn't expect it to happen, but the burger was really filling and I, eventually, pulled it off the bun and left the bread on the plate. Next time, I'll ask for it without the bun because you just don't need it. 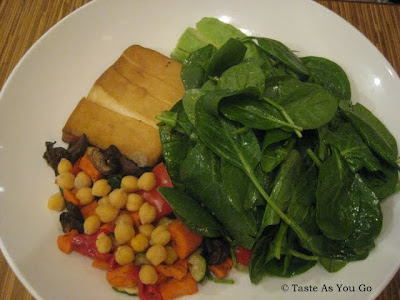 Lorianne ordered one of her favorites - the Seared Asian-Marinated Organic Tofu Salad ($14.25) with baby arugula, roasted vegetables, chickpeas, avocado, and balsamic vinaigrette. I didn't have a taste of it, but it looked fabulous. The food at Josie's was so fresh and delicious that I didn't miss the meat for a second. I'm looking forward to going back and trying some of the other dishes on the menu... and, perhaps, one of the rejuvenating drinks that Lorianne had.


When you decide to take a break from meat, what's your go-to meatless meal?