Skip to main content
Labels
Posted by Michelle Rittler // Taste As You Go May 02, 2010 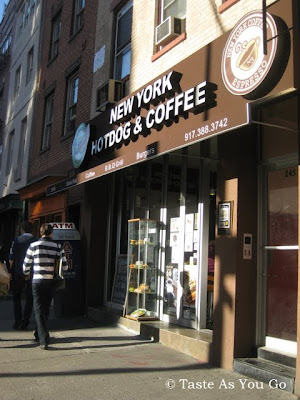 I was provided with the opportunity to dine at this restaurant at no cost.  I do not accept monetary compensation for writing about my experiences. All opinions expressed are my own.

Not too long after I posted my review of Le Paris Bistrot, I was contacted by the publicist for New York Hotdog & Coffee. She invited me to come down to the West Village to try their authentic Korean fusion hot dogs. The idea of fusion hot dogs intrigued me, so I called my friend Sara and asked her to join me for a free meal and for what sounded like a unique dining experience. 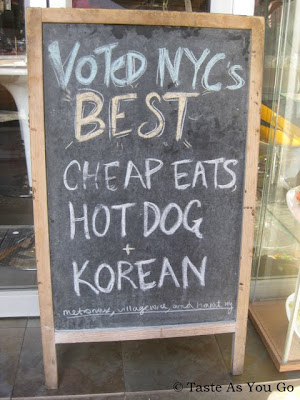 The restaurant had a display of plastic versions of their food in the window, which drew people walking by over to look more closely. But none of them were swayed by the realistic-looking pieces of food to actually step inside. Hoping that the board outside the restaurant wasn't touting customers with hyperbole, I went inside to wait for Sara and was instantly greeted with friendly smiles from the staff members standing behind the counter and by delicious smells coming from the kitchen. 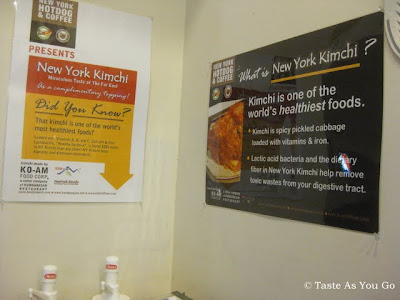 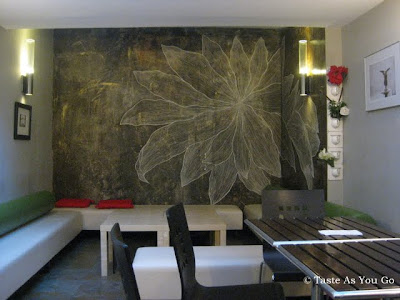 When Sara arrived, we ordered our food, upon recommendation from the publicist, and were led past the kimchi bar to the back of the restaurant, which was actually quite cozy. I wasn't too keen about spotting the words "digestive tract" on one of the signs above the kimchi bar as I walked past, but I shrugged it off and decided that the sign was informative, albeit mildly inappropriate. (Who wants to read about your digestive tract while eating or preparing to eat? Perhaps I'm just too squeamish.)

This is when things started to get awkward.

Rather than allowing Sara and I to eat the food and to concentrate on the flavors and textures without too much interruption (obviously, Sara and I were going to catch up while we ate), the publicist sat down at the table with us. And stayed there the entire time, telling us about the origins of the restaurant (it actually started in Korea, despite being named "New York Hotdog & Coffee") and the reason why they serve coffee alongside the hot dogs (because Koreans drink coffee at every meal). I wasn't able to give any real attention to the food I was putting into my mouth. And, frankly, by the time there was enough of a break in the conversation for me to eat anything, the food had gone cold. 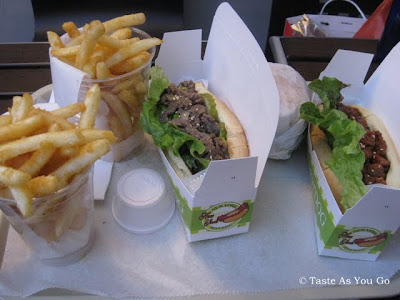 Sara and I shared a Bulgogi Burger, a Bulgogi (Beef) Hot Dog, and a Dak-Kalbi (Chicken) Hot Dog, along with some French fries. Thank God Sara was with me -- there turned out to be a lot of food on that tray! 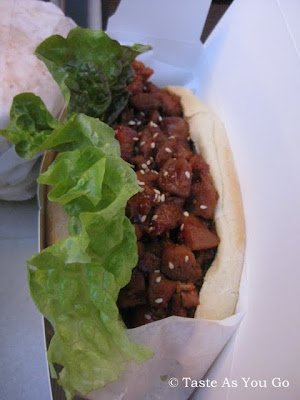 First up? The Dak-Kalbi Hot Dog, which is described on the menu as consisting of a chicken hot dog topped with "grilled chicken breast in a traditional fiery sauce, lettuce, [and] pickles." Sara and I were expecting a bit of heat since the sauce was supposed to be "fiery" but we were both disappointed. There was some heat there but not nearly enough. When we asked about this, the publicist stated that they toned down the spice a bit to appeal to more of an "American palate," claiming an authentic heat and spice level might be too much for New Yorkers. Her answer rubbed me the wrong way. If you're going to advertise food as "authentic," then make it authentic. Don't underestimate your customers, especially since a good portion of them may be stopping by your establishment in search of something authentic. 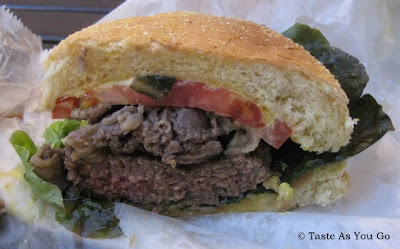 To change things up, we moved on to the Bulgogi Burger next. The all-beef patties are made fresh every morning and marinated in the restaurant's signature bulgogi sauce. That all sounded great and I was pretty excited to see what effect the marinade had on the beef. Unfortunately, when I cut the burger in half, I noticed a sauce on the burger that I wasn't expecting. When I asked the publicist what was in the sauce, she told me that it was a combination of mayonnaise and mustard -- two condiments I always ask restaurants to "hold." Knowing that New York Hotdog & Coffee was marketing themselves as a restaurant that offered a fusion of traditional Korean and American foods, slathering the burger with mayonnaise and mustard made sense. But I was very reluctant to take that first bite and only managed to take two bites before finally putting the burger down. Sauce aside, I was expecting a burger with a deep flavor, but Sara and I both agreed that something was lacking. While the burger patty was juicy, the flavor just wasn't there. Bland city. Major disappointment. 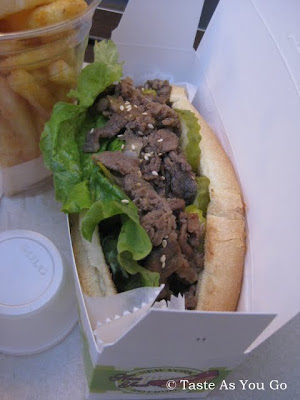 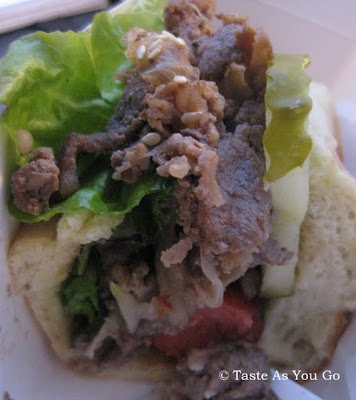 At that point, I didn't have high hopes for the last remaining dish on the tray -- the Bulgogi Hot Dog. Despite everything I was told about how the food was prepared at New York Hotdog & Coffee - the hot dogs are steamed and then grilled (rather than boiled) so the texture doesn't suffer and the bulgogi topping is made with freshly pureed fruit (pears and apples) and honey as a sweetener rather than refined white sugar - I just didn't want any more. But, I was invited to try the food and resigned myself to living up to my end of the deal. As with the Bulgogi Burger, the Bulgogi Hot Dog lacked any significant flavor. Could this have been because we were given their mild hot dogs rather than their spicy hot dogs? I just don't know.

What made this whole experience worse was knowing that the publicist was watching me take every bite. She'd ask how we liked the food, and there was no way I could say to her face that I wasn't exactly enjoying myself. I resorted to lame answers such as "that's pretty good" or "I like that the burger isn't overcooked". It didn't help knowing that they were planning on closing the Bleecker Street location in favor of opening up a location in Midtown and, possibly, a location in the Financial District. It didn't help hearing the publicist openly admitting that their concept of combining traditional Korean food with traditional American food was one that hadn't been that well-received up until my excursion to their restaurant.

And it didn't help watching a couple change their baby's diaper on one of the tables in the back room because the bathroom wasn't equipped with a changing table. An inquiring look in the direction of the publicist only produced this response: "I'm really not in a position to say anything."

The restaurant is in the process of revamping their menu, but, in my opinion, they need to revamp way more than that.

New York Hotdog & Coffee has closed and is no longer in business in New York, NY. Updated November 30, 2015.