Skip to main content
Labels
Posted by Michelle May 19, 2010

Piquillo: Being First Doesn't Make It the Best 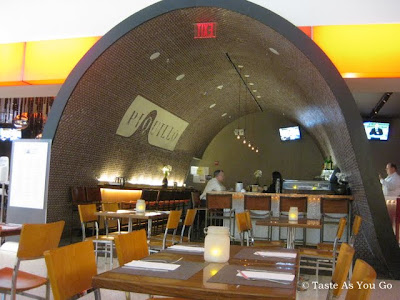 I shouldn't be writing this blog post. I should be concentrating on cleaning my apartment or paying the bills that are due very, very soon or packing for my mini-vacation to Arizona. I shouldn't be worrying about updating my blog when I have so much to do before I leave town. But, seeing as I'll be flying out of JFK again, out of the legendary Terminal 5 again, I thought this post would be apropos. Even if it has been over a month since I sat down at a table at Piquillo -- the first tapas restaurant in a U.S. airport - to treat myself to something other than fast food before my flight to Orlando. 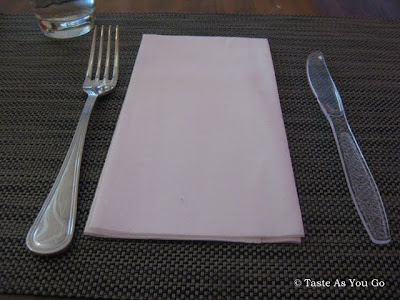 I must admit, what initially drew me over to Piquillo was the tunnel-like structure that covered the bar area. But I opted for a table away from the bar to avoid having to make conversation with the guy who was already sitting there. And the first thing that struck me about the table setting was the choice of flatware -- a metal fork and a plastic knife. It didn't make sense to me that the restaurant was out of knives or that they were all in the dishwasher since every single table was set up the same way. So I found myself asking the question, "are we not being trusted with real knives?" If so, doesn't anyone realize that a metal fork could serve as a suitable weapon if need be? All of that intrigue and I hadn't even looked at the menu yet. 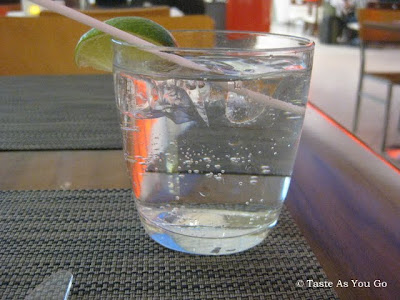 I had plenty of time to kill before my flight, so I sipped on a G&T while I weighed my dinner options. I was tempted by the small plates but ultimately ordered the Salpicón Pontevedra, a salad consisting of chilled shrimp and avocado, marinated in a light vinaigrette and served over mixed greens. It sounded like the perfect dinner to have before boarding my plane -- simple, but neither heavy nor greasy. 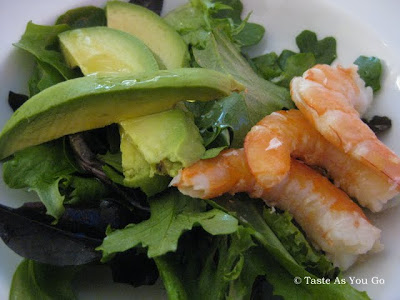 LOOKS CAN BE DECEIVING.

Where do I begin? Well, for such a simple salad, it took over 20 minutes to reach me. I could understand the wait if the restaurant were packed. But the guy at the bar had left before I even ordered my food and there was only one other diner there. Mixed greens, cold shrimp, sliced avocado, and a drizzling of dressing took over 20 minutes.

Now, let's talk about the ingredients. The avocado was under-ripe and eating it was an unpleasant experience for me because one of the things I love about an avocado is its buttery texture. Not so much. The shrimp went the other way -- totally overcooked and absolutely rubbery. If I dropped one on the floor, I'm sure that thing would have bounced over to the next table and onto the other diner's plate. As if that weren't bad enough, the vinaigrette was so salty that it was clear to me that no one had bothered to taste the damn dressing before the put it all over my food. One of the worst salads I've ever eaten... EVER. Not worth the money I spent at all. I can only hope the rest of the food on their menu is of better quality.

Piquillo may be the first tapas bar in a U.S. airport, but that distinction may turn out to mean squat if they continue to send food like that out of the kitchen. I should have avoided the tunnel-like structure and paid $15 for a slice of gooey, cheesy, greasy pizza instead. At least I would have enjoyed it.

Next time, I'm going to pass on Piquillo.