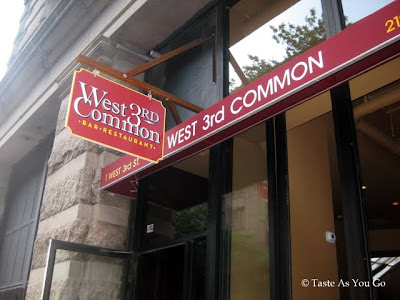 I was provided with the opportunity to dine at this restaurant at no cost.  I do not accept monetary compensation for writing about my experiences. All opinions expressed are my own.

Earlier this month, I was invited to try the food at a recently-opened gastropub in NoHo and, for this eating adventure, I brought along my friend Zach. When I checked in with the hostess, who also turned out to be the only server for the entire night (from what we saw), she told me the table that had been reserved for us was occupied and that we'd have to wait. I looked around to see numerous empty tables and asked myself why the establishment felt the need to give away a table that was reserved when there were plenty of others to choose from. Rather than create a fuss, I assured the hostess that sitting on the couches would be preferred over settling somewhere only to move halfway through our meal once our table was free. 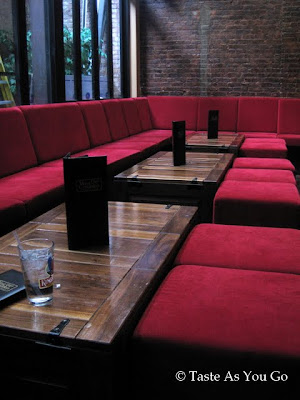 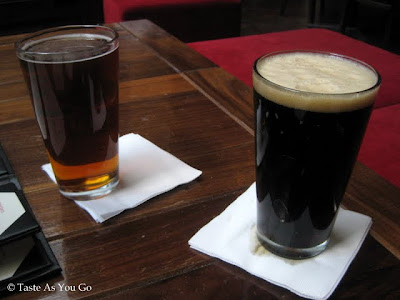 To quench our thirst as we came to a consensus about the dishes we would share, Zach and I ordered up some beer -- Brooklyn Lager for him and Abita Turbodog for me. The menu was appetizer-heavy and included three different types of wings and three different types of sliders. Naturally, we chose one of each. The Asian-inspired items jumped out at us, despite the knowledge of Chef David Scott Walker's southern roots, so we ordered the Sweet Chili Glaze Wings with Namasu Pickles ($10) and the Duck Sliders with Kim Chi and Sweet Hoisen ($10). 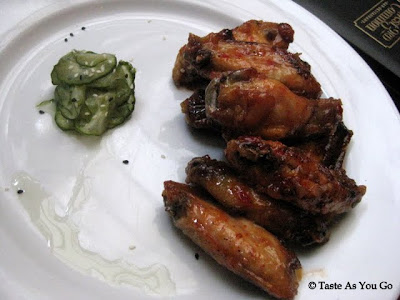 The wings were meaty and the glaze was made up of the right combination of sweet and spicy. We couldn't quite place the source of the sweetness, but, after a while -- and more beer -- we concluded, with our untrained palates, that the glaze tasted like the duck sauce you get in those little packets that come with your Chinese take-out. With that said, the wings were a bit messy, and we would have appreciated some moist towelettes to clean our fingers with before moving on to the sliders. 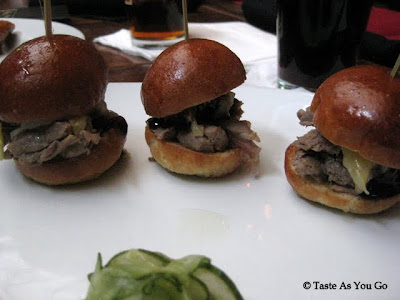 While they weren't my favorite, the Duck Sliders did have potential. Unfortunately, the duck was overcooked and required a bit of effort to chew and the hoisen sauce didn't provide the depth of flavor that we were looking for. I don't think the sliders would suffer from a bit of heat if they wanted to move away from the sweetness of the hoisen. Maybe even a touch of that glaze from the wings. The sliders left us wanting more. 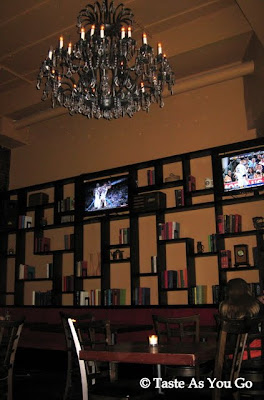 While we waited for our main courses to arrive, Zach and I sat back and observed our surroundings. We couldn't quite put on our finger on it, but something about the vibe of the place was just off. In one corner were some students, presumably from NYU given the neighborhood we were in, playing a loud game of drunken Scrabble. Almost directly across from us was a couple attempting to have an intimate dinner. And then there were other people who, like us, were just trying to unwind after work with a drink and good company. Adding in the flat-screen televisions airing old baseball games and an almost misplaced chandelier only left us feeling more confused. It was like the restaurant was going through an identity crisis and didn't know where they fit. 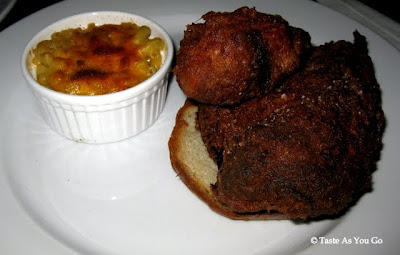 The main courses took a while to get out to us and, by the time they did, Zach and I were ready to dig in. I couldn't ignore the temptation of the Spicy Fried Chicken with Cheddar and Smoked Gouda Mac and Cheese ($16) minus the Mustard Slaw. Zach opted for the steamed Common Burger with Cheddar, Tomato, Rocket, Sauteed Onions, Mushrooms, and Herbed Aioli, served with Garlic French Fries ($12, plus an extra dollar for the mushrooms). My meal was just a disaster, which was really disappointing because I had been craving fried chicken for days leading up to our dinner. All I could taste was salt. It was almost as if the chicken had been brined before frying and they forgot to rinse off the salt before throwing it into the oil. Sure, I expected the salt on the crispy skin since you're supposed to salt fried food when it comes out of the oil, but the salty taste went all the way to the bone. I could only eat a few bites before I had to stop. And the macaroni and cheese was dry. Sad, sad, sad. For a chef with southern roots, I expected more. 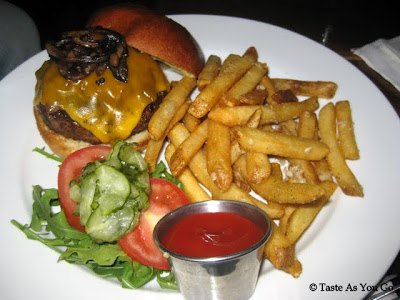 When I asked Zach how his burger was, he said it was just okay. A typical burger you'd find in a typical bar in Anytown U.S.A. I stole some French fries and found that, they too, had fallen victim to the heavy hand of seasoning. Way too salty. After all was said and done, we came to the awful conclusion that we enjoyed the brioche buns from the Duck Sliders and the Common Burger the most.

As we were leaving (ie. fighting our way through the swarm of Stern students who had descended upon the bar in droves to take advantage of the generosity of their professors), Zach summed up the evening pretty accurately: "There's nothing special here except the company."