Friends Reunite over Brunch at Craftbar 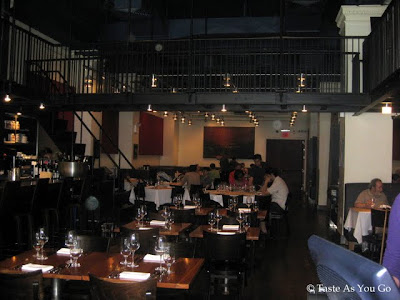 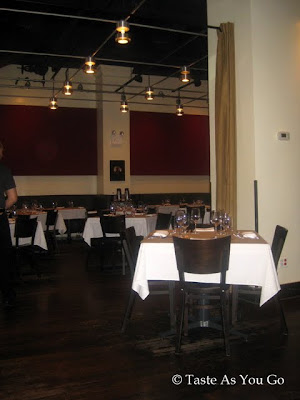 You know what's fantastic about honest friendship? You can have years pass between meetings and have things just pick up seamlessly as if you only just saw each other a week ago. Rewind to Sunday brunch on Memorial Day weekend in New York City and the reunion of friends over a fantastic meal at Craftbar.

I met Stephen (a.k.a. "SPB") and his wife Melissa while in graduate school in Cleveland nearly a lifetime ago. When SPB and I weren't busy immersing ourselves in all things related to the history of Western art music, we bonded over our mutual nostalgia for life back on the East Coast. At that time, I hadn't quite mastered the concept of cooking for one and wound up with more leftover food than I knew what to do with. When I offered it to them, SPB and Melissa gladly took it off my hands. If it weren't for them, I think I'd still be eating the truckloads of pasta salad and white bean chili that I made. 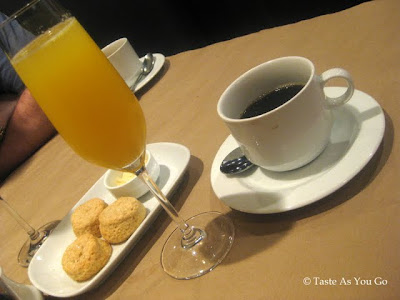 Since Craftbar doesn't begin serving breakfast cocktails until noon (our reservation was for 11:30am), we used the 30 minutes before Mimosa Hour to catch up and to drool over the items on the brunch menu, which, like Craftbar's other menus, reflected foods of the season. We had a bit of difficulty deciding what to eat, but after reminding ourselves that it was a special occasion, we threw all rules of ordering out the window and treated ourselves to whatever we wanted. 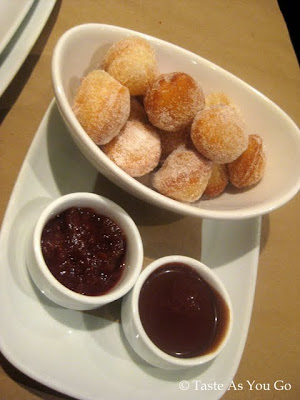 Of course, that involved me ordering the Brioche Doughnuts ($6) for all of us to share. Warm, light, dusted with sugar, and served with two dipping sauces.... Heaven. I'm not exaggerating. I could have eaten my weight in those doughnuts and would have been perfectly happy. Unfortunately, I can't remember what the sauce on the left was made out of, but the sauce on the right was c-h-o-c-o-l-a-t-e. Had we been sitting at a table in the corner of the restaurant that was out of the view of the rest of the diners, I would have slurped that chocolate sauce right out of the bowl. No lie. 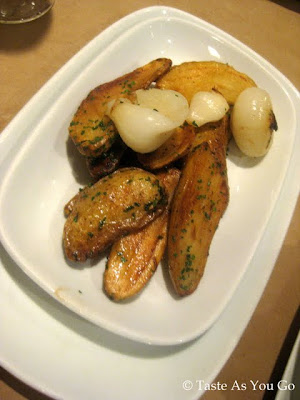 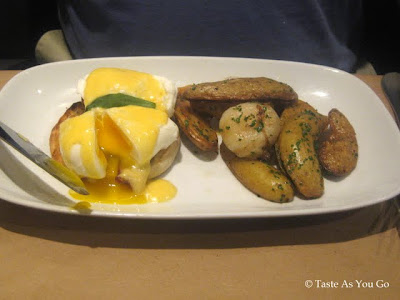 SPB, on the other hand, got a pile of those potatoes and onions all to himself with his Eggs Benedict ($12). Now, here's where I have to give SPB a special shout-out. Without me having to ask, he cut open one of the poached eggs to allow the yolk to run out onto the plate and then sat back so I could take a picture of the whole dish for the blog. No rolling of the eyes or sighing with impatience. It was amazing! And, from what I hear, the Eggs Benedict was amazing, too. 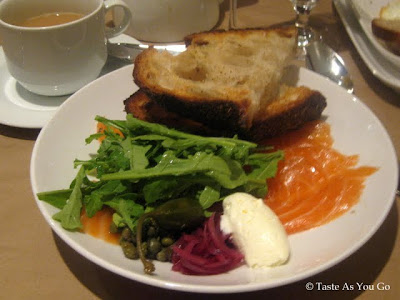 Melissa opted for something a little lighter and ordered the House-Cured Salmon with Country Bread, Crème Fraîche, Capers, and Red Onion ($13). As much as I wanted to admit that I had fully recovered from the cooking incident of 2006 that turned me against salmon, I politely declined when Melissa offered to share some of her meal with me. I can eat salmon sushi without a problem... but it's going to be a little while longer until I can confidently eat other forms of salmon again. Due to my aversion, I merely admired the presentation from across the table. 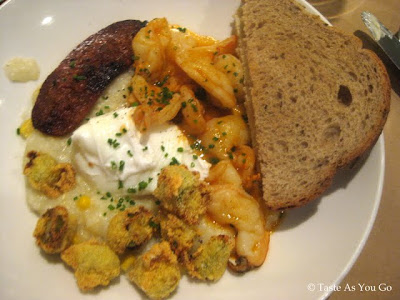 Thankfully, there was no trace of salmon on my plate. I ordered the Shrimp and Grits ($14), with Chorizo, Okra, and Poached Egg. I go through these strange periods when I just crave shrimp and grits, which is odd since I certainly wasn't raised on the dish and it's not something I've ever tried to cook at home. These shrimp were cooked perfectly, not rubbery or chewy, and the chorizo was smoky, spicy and balanced out the creaminess of the grits. As for the okra, I could have done without them. They weren't seasoned (or seasoned enough) after they were fried, so they tasted bland and completely out of place on that plate. 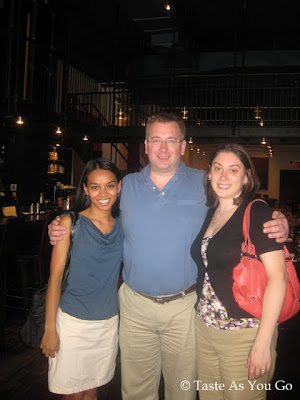 The only thing that would have pushed us over the edge would have been a Tom Colicchio sighting. I know I would have loved to have thanked him for our meal and would have begged him for the recipe for the Brioche Doughnuts (and, perhaps, for a picture). Regardless, SPB, Melissa, and I left Craftbar full of delicious food, happy over our reunion, and with a vow between us not to let years pass until our next brunch. It sounds like we might even live up to that vow since we have plans to have brunch again in August.

Be sure to check back to see where we decided to eat!