Girls' Night Out at Cafeteria 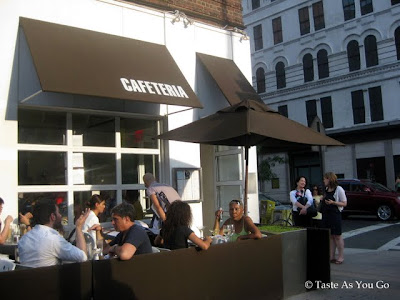 As a woman in New York City, I've been asked again and again whether my life resembles the lives that Carrie, Charlotte, Miranda, and Samantha led in Sex and the City. I'd love to be able to admit that I own at least ten pairs each of Jimmy Choos and Manolo Blahniks, but I don't. And when it comes to having a calendar booked solid with back-to-back dates with men who are influentially rich and men who are richly influential, I don't have that either. For a long time, I was convinced that all I had in common with that fabulous foursome was the undeniable fact that I live and work in New York City.

Then it occurred to me: I don't just live and work in New York City... I also eat in New York City. I've grabbed a hot dog (or two) from Gray's Papaya in the middle of the night, just like Carrie did after her book party. Though not my favorite experience, I've eaten at Il Cantinori, where Samantha planned to host a dinner in honor of Carrie's thirty-fifth birthday... but no one showed up. And, of course, I've eaten more cupcakes from Magnolia Bakery than I'd like to admit. 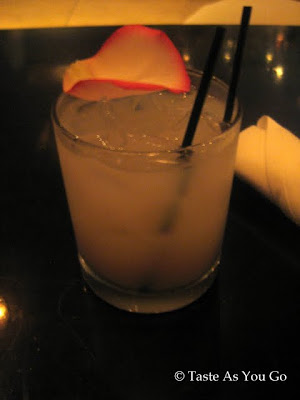 Now I can also say that I've sipped on cocktails and noshed on decadent appetizers at Cafeteria in Chelsea, naturally, in the company of my girlfriends, not a week after the release of Sex and the City 2. If you want to get technical, I only sipped on one cocktail -- the Lychee and Lavender, made with Rain Organic Lavender-Infused Vodka and Fresh Pureed Lychees. The cocktail was light, refreshing, and, surprisingly, not too sweet. If I had allotted myself a bigger booze budget for that night, I would have definitely ordered more than one! 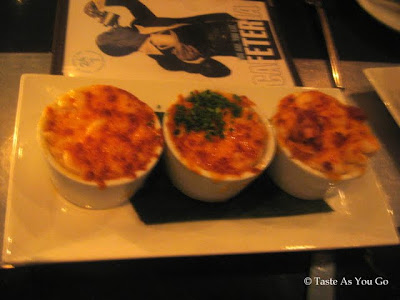 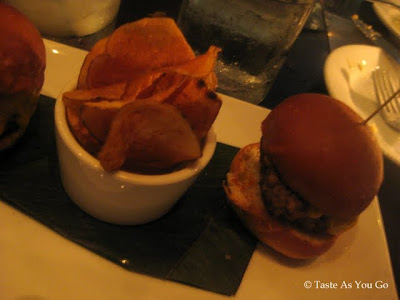 I wish I could say I enjoyed the Grilled Black Angus Burger Sliders ($9) as much as the macaroni and cheese. The meat was cooked beyond my requested "medium" and was so dry that even ketchup couldn't save it. 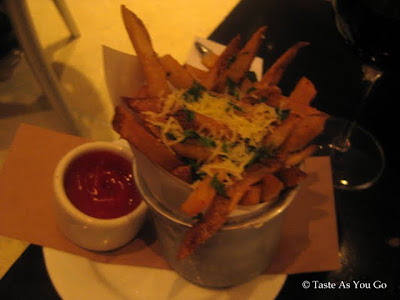 However, all was not lost. I didn't want mini burgers without a side of French fries, so I ordered the Truffle Parmesan Fries ($6) to go along with the sliders. I thought having a second dish featuring truffle oil would tie my hodgepodge of a meal together nicely, and I wasn't wrong. I would order the Truffle Parmesan Fries again in a heartbeat. Though, I'd ask them to hold the ketchup... these little beauties didn't need anything else!

If you're looking for a place to meet up with the girls, head down to Cafeteria, channel your favorite Sex and the City character, order up a round (or three) of drinks, and share a plate of macaroni and cheese. And, if you can, grab a table downstairs -- it's quieter and all of those tables receive extra-special attention from the bartender down there!

[PS. Only a couple of more days left to enter my Georgia's Kitchen Giveaway! Don't forget to enter!]