How To: Seed a Pomegranate 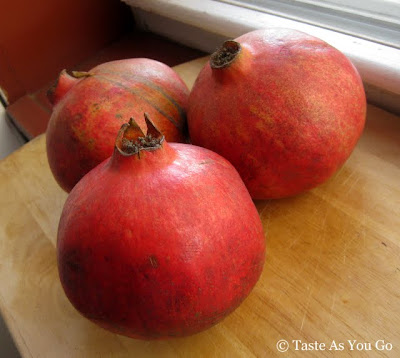 Until I began reading the stories of Greek mythology in high school, I had no knowledge of pomegranates. We were more of an apple-banana-orange-pear-grape kind of family. I probably saw them from the seat of the grocery cart while shopping with my mother as a child, but I never thought to ask her what those round pieces of fruit with the spiky tops were. It took learning about Hades' abduction of Persephone for me to start digging for more information.

The Myth of Persephone


Persephone was the beautiful daughter of Zeus and Demeter, goddess of the harvest. Her beauty was so great that everyone loved her, including Hades, the ruler of the underworld. One day, while Persephone was picking flowers on the plain of Enna, the ground suddenly opened and Hades rose up out of the earth and abducted her. Only Zeus and Helios, the all-seeing sun, noticed what had happened.

It wasn't until Demeter went down to earth to search for Persephone that the truth was revealed. Demeter was so angry and distraught, she secluded herself and the earth ceased to be fertile. Knowing that this could not continue for long, Zeus sent Hermes down to Hades to retrieve his daughter. Hades begrudgingly released her, but not without giving her a pomegranate (or, according to some sources, pomegranate seeds) first. When Persephone ate the pomegranate, it bound her to the underworld forever and she was fated to spend a quarter of the year there. For the rest of the year, Persephone stayed with her mother. While Persephone was with Hades, Demeter refused to let anything grow, and winter began. 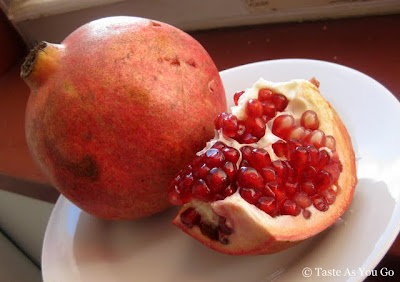 Fascinating, right? Makes you want to run right out and buy a pomegranate so you can eat it. So, say you do that. You have the pomegranate on the kitchen counter... Now what? How are you supposed to eat the fruit? There are a number of ways to remove the seeds from the inside of a pomegranate. Here's how I prefer to do it.

How To: Seed a Pomegranate


1. Prepare a large bowl of ice water. (I use a stock pot since I usually seed more than one pomegranate at a time.) 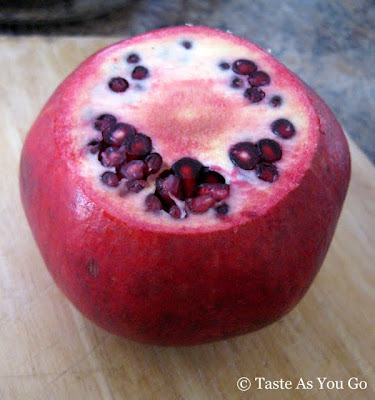 2. Slice the top off the pomegranate. 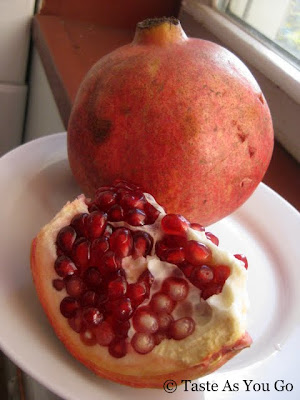 3. With a sharp paring knife, score the rind of the pomegranate, drawing the blade from the top of the fruit to the bottom. 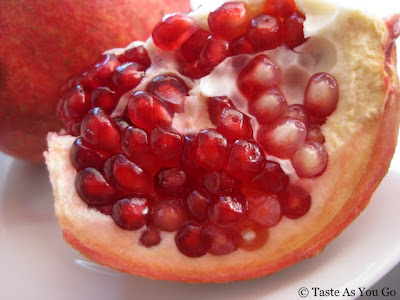 4. The scored lines in the rind will make breaking the fruit into pieces much easier. Over the bowl of ice water, break apart the fruit and gently brush the pomegranate arils (seeds) away from the inner membrane. The seeds will sink to the bottom of the bowl, while the membrane and rind will float to the top. 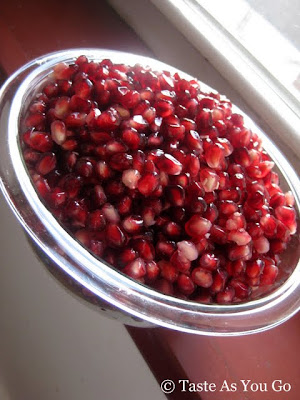 5. Skim the membrane pieces and rind from the top of the water and remove. With a slotted spoon, scoop the arils from the bottom of the bowl. 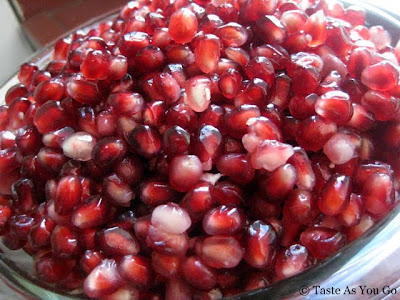 Voila! Now you have fresh pomegranate arils to use in recipes or to eat straight out of the bowl. (Note: the arils pictured above are from four pomegranates. You won't see that many seeds from one pomegranate!) You can also freeze pomegranate seeds for future use, which is why I typically seed more than one at a time. 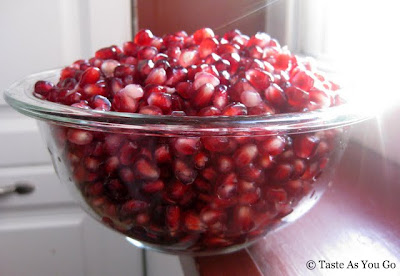 Come back tomorrow to see how I used these little red pearls!

And, if you liked this "How To" post, check out: