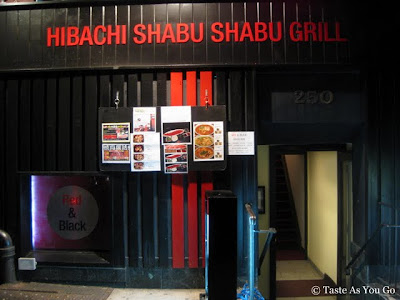 It's no secret that life moves quickly in New York. Within the span of days, the landscape of the city can change, and if you're not paying close attention, you can miss it. I confess that I often maneuver through the streets based on the location of scaffolding, and when that scaffolding is taken down or moved to another side of a building, it takes a few days for me to get reacquainted with a block I walk down every single day.

The same can be said of restaurants. One day, you can be stuffing your face full of the best falafel you've ever had in your life, only to be utterly confused the following week when you discover that your new favorite Middle Eastern restaurant has transformed into a pizzeria or, even worse, another Starbucks. You find yourself standing on the sidewalk, scratching your head, and mentally asking, "What happened to....?"

I had a similar experience a few months ago when meeting my friend Sunitha for dinner at a new Japanese restaurant on the East Side. As I was walking along 52nd Street, a strong feeling of deja vu washed over me. I was absolutely positive that I had walked this way before. Just as I spotted Sunitha in front of the restaurant, I figured it out -- I had done this before. Red & Black was the restaurant that filled the vacant space after Yakiniku Izakaya (a sushi joint I happened to really like) had shuttered. What would the new restaurant have in store? 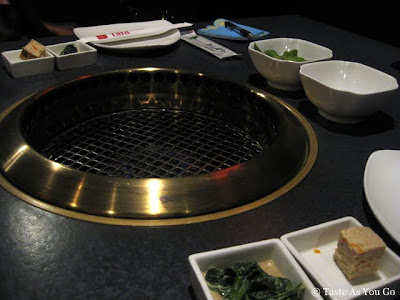 Since I was there to officially review Red & Black, Sunitha and I were immediately ushered to our table and were given a very quick explanation about the grill in the center of the table and about the difference between the various styles of cooking the meat for our meal: BBQ (grilling on a net), Shabu Shabu Grill (grilling on a sizzling pan), and Shabu Shabu (the traditional Japanese hot water pot). 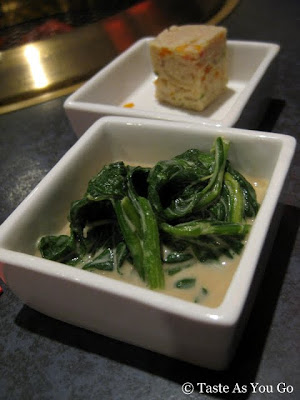 To whet our appetite while the staff prepared the ingredients for the main part of our meal, Sunitha and I were given two tiny starters: Tofu with Vegetables and Spinach with Peanut Sauce. I assumed both dishes were hot, but I discovered otherwise when I put the food in my mouth. While the Tofu with Vegetables had good flavor, its consistency made the experience of eating it a rather unpleasant one. As for the spinach, I had to give myself a pretty serious pep talk to finish the bite I took. Again, the flavor was decent, but my mouth wasn't happy about how cold and soggy the spinach felt. 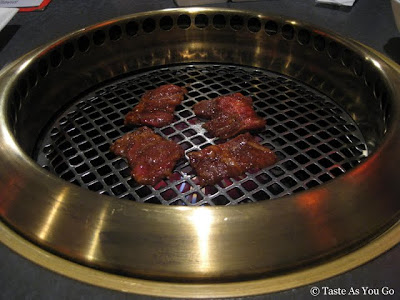 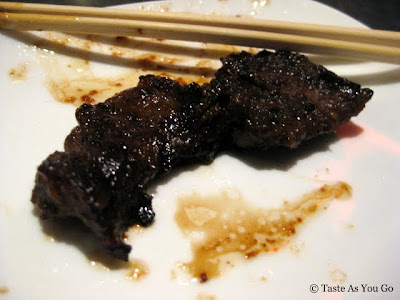 Sunitha and I watched as our server prepare BBQ Skirt Steak with Miso Paste ($9.00). Marinated slices of skirt steak were placed directly on the net and grilled until they were slightly charred on both sides. After the first bite, we were hooked. There were so many layers of flavor unfolding at once that we couldn't stop ourselves from devouring the meat as soon as it came off the net. In retrospect, most definitely our favorite of the evening. 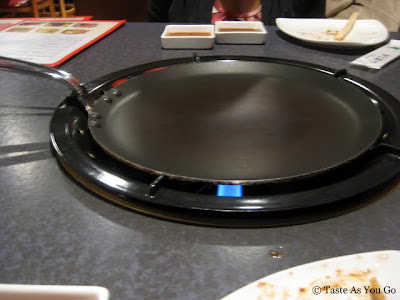 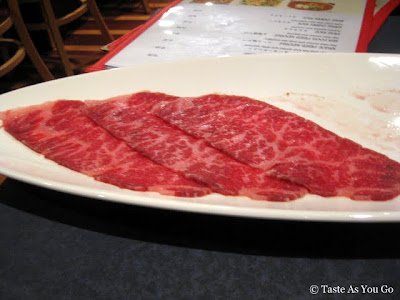 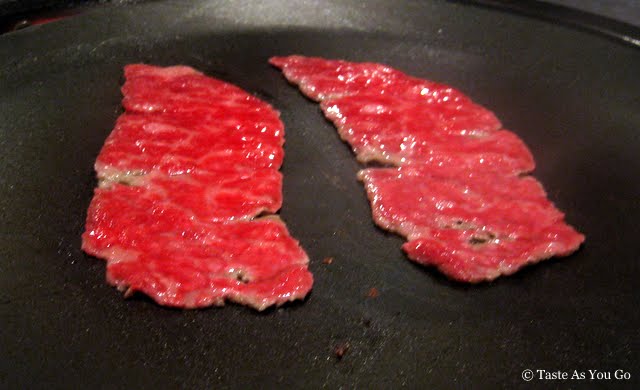 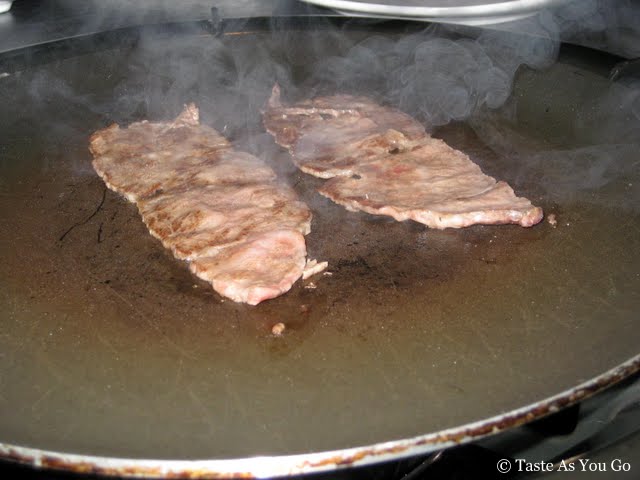 For our next course, the net was removed from the center of the table and replaced with a shallow flat pan. Time to try the Kobe Beef Short Rib ($18.00), prepared on the Shabu Shabu Grill. The quality of the beef was apparent on first bite, and Sunitha and I both enjoyed the texture of the meat, but the depth of flavor wasn't there. Obviously, a lot can be said for marinating the meat before cooking. 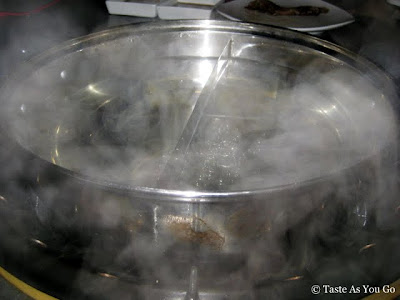 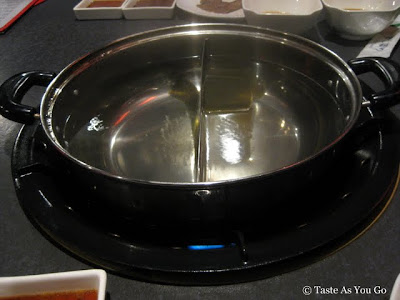 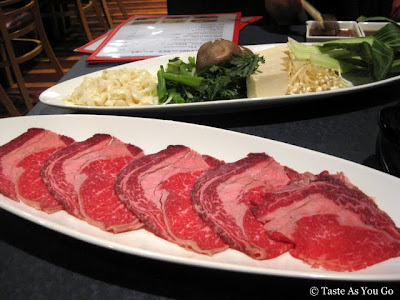 Our third course -- the Shabu Shabu Hot Water Pot with Kobe Beef Rib Eye ($18.00) was a little more complicated and required a little more involvement and a lot more coordination. You have to time the cooking of the beef with the warming of the noodles and tofu and the blanching of the vegetables. 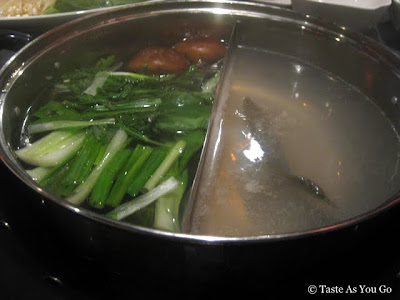 Thankfully, Sunitha and I weren't left to our own devices and our server assisted us in preparing all of the components of the dish. 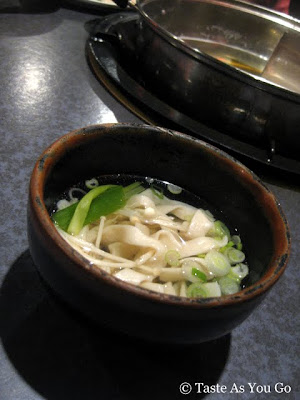 The finished product? A nice big bowl of gently cooked meat (it's swished around in the hot water a few times, just until the meat turns from pink to a light gray) and freshly cooked vegetables with generous chunks of tofu and fresh herbs! The best part about this dish is its versatility -- you change up the meat depending on preference and add whatever vegetables are in season or available in the kitchen. If making this at home (I'm assuming this can happen over a pan of simmering water -- but I'm hardly a Shabu Shabu expert), think of how quickly you could use up bits and pieces of vegetables in your refrigerator. 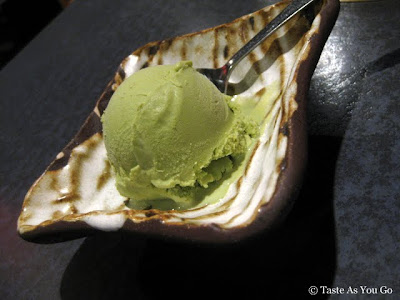 To finish the meal, we were given dishes of the most delicious Green Tea Ice Cream I've ever eaten. Smooth and creamy, you could smell the fragrant perfume of the tea even before you brought a spoonful of the ice cream to your lips. Honestly, I don't think we could have ended the meal any better.