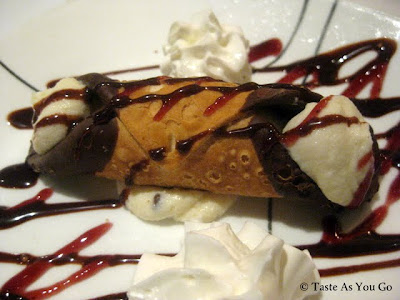 What do you do after having dinner with friends in Greenwich Village? You settle the bill, bundle up, and take a stroll around the neighborhood until you decide where you want to have dessert, of course.

Seeing as the quality of the food we had at Boyd Thai wasn't quite where we wanted it to be, Stephen, Melissa, and I knew we had to salvage the night with some sinfully rich and delightfully delectable dessert. We headed down the street and around the corner to Le Cafe Figaro on Bleecker and were seated at a little table in the back, next to the glass partition dividing the interior of the restaurant from the garden area. The restaurant wasn't too crowded and comfortably accommodated groups, as we got to watch the rather large and boisterous group of NYU students sitting across the way become more animated as the glasses of wine gathered on the table emptied at an impressive rate. 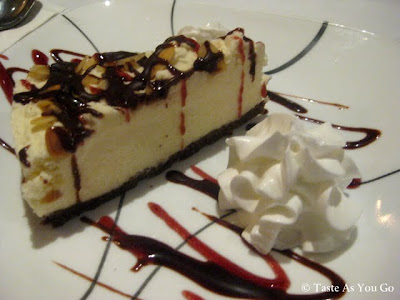 We sat and sat and sat. It felt like forever until a waiter finally remembered that we were sitting there and hadn't ordered anything to eat or drink yet. I was so desperate for my after-dinner cup of coffee, I considered "accidentally" dropping my silverware on the floor to make a commotion, but I doubt the clattering of metal would have drawn the attention of the staff. When our waiter did show up, we ordered the Cannoli (me), the White Chocolate Cheesecake (Stephen), and the Tiramisu (Melissa). Five hours later, our dessert arrived. 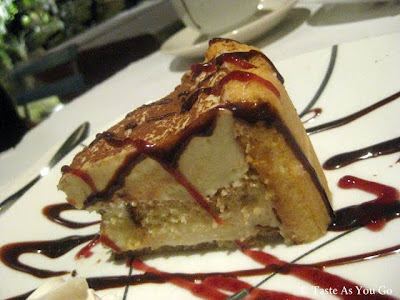 Obviously, I'm exaggerating. It didn't take five ours for our dessert to show up. It just felt that way.

When Peter Clemenza told Rocco to "leave the gun... take the cannoli" in The Godfather, he most definitely was not referring to the cannolis at Le Figaro Cafe. This is going to sound harsh, especially since I usually try to write something nice about every dining experience, but that was the worst cannoli I've ever had. The shell was stale and tasted like someone had pulled a toilet paper roll off the holder and stuffed it full of flavorless ricotta. The drizzle of chocolate sauce and raspberry sauces? Completely unnecessary... Frill to hide the fact that the dessert was really awful.

Actually, the drizzle of sauces was a common theme around the table. I could understand the White Chocolate Cheesecake having a little bit of garnish, given that chocolate and raspberry pair well together. But on the Tiramisu? Not so much.