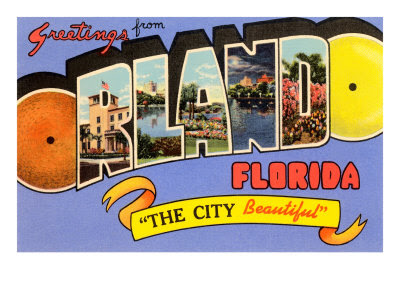 Image: AllPosters.com
I'm sorry. I didn't mean to stay away. I had every intention of writing on a more regular basis. I know I popped in on Valentine's Day, but I didn't say much. Not only did I not have the words, but I also lacked the energy to channel my creative side.

Do you forgive me?

The truth is, I've been a little overwhelmed. Between putting in long hours at the office and keeping up with the other major areas of my life, I haven't had the time to devote to the blog, although the desire to do so was there. As I'm writing, I'm desperately trying to ignore the mess that has started to build in my apartment. There are two half-empty suitcases sitting on the floor, half-empty because I had to stop before finishing the chore in order to do more important things... like sleep.

But, I'm traveling next week, so at least one of those suitcases will be emptied for the purpose of filling it right back up. Traveling means having to take time away from the blog, so I'm forcing myself to write this blog post tonight. Despite the stack of dishes in the sink that should be washed. Despite the countless emails that have still gone answered. Despite the other items on my to-do list. I need a break, and blogging has always been my escape. So, here I am, writing about some of the food I ate while in Orlando on business for the International Builders' Show (my first trade show!) ... just before I leave for a business trip to Knoxville. 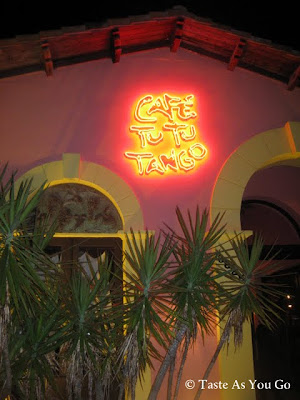 I was uninspired on my first night in Orlando and settled for eating dinner in the restaurant in the hotel. However, after my first full day at the trade show, which involved long hours in a cold convention center running our hospitality suite, my coworkers and I decided to check out a restaurant recommended to us by one of our clients. Cafe Tu Tu Tango promised us the variety of an eclectic menu, the opportunity to view (and to purchase) artwork made by local artists, and the entertainment of a belly dancer.

Really? How could we go wrong?

I started with the Asian Beef Salad ($10), comprised of sliced tenderloin that had been marinated in a mixture of pepper and garlic, picked cucumbers, thick slices of tomatoes, red onions, and grilled romaine. The salad was overwhelmed with tomatoes, so I'm not sure why they bothered putting the lettuce under there. I never got to the bottom of the bowl! The beef had tremendous flavor and I loved the pickled cucumbers, but that's where my excitement ended. I thought the glaze was too intense and wound up making the entire dish too salty. Had I had my wits about me, I would have asked for the dressing on the side so I could control how much of it wound up on my salad. 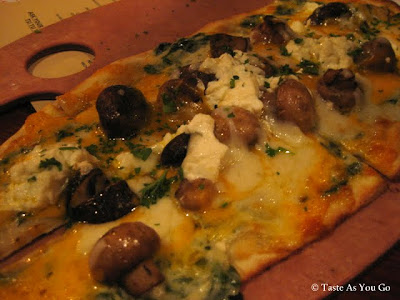 My second choice of the evening was the Baby Portabella and Spinach Flatbread ($10). The thinly crafted bread was topped with creamy spinach, fresh mushrooms, and a blend of four difference cheeses. The menu touted a "garlic and bacon sauce," which is what sold me on the dish in the first place, but I could detect neither garlic nor bacon. Major disappointment. Overall, the flatbread was tasty, but I found it to be a little greasy, and it struck me as odd that the mushrooms were left whole and not sliced. They rolled right off the flatbread after the pieces were picked up. A little awkward. 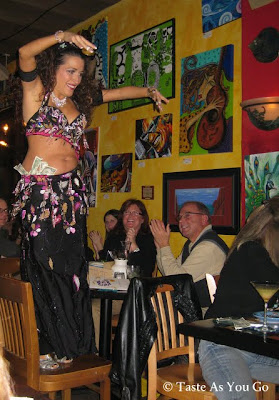 Perhaps the real draw to the restaurant was the belly dancer and not the food... After the scene at Cafe Tu Tu Tango, we decided to go somewhere a little more upscale for dinner the following night.

Thanks to some restaurant recommendations I got from fans of the Taste As You Go Facebook page, we headed over to Restaurant Row. More specifically, to Roy's Orlando. 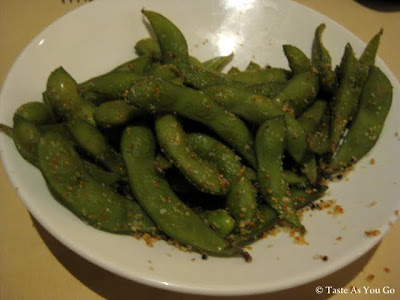 To start, we shared a complimentary plate of Edamame that was liberally sprinkled with a combination of Asian spices and sea salt. Delicious! 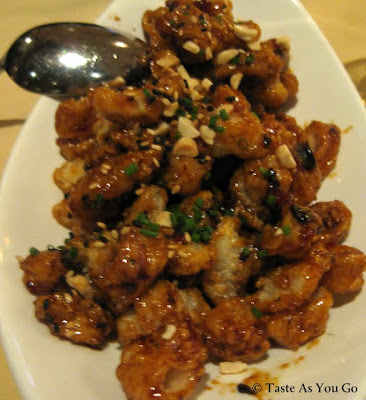 I also shared an order of Crispy "Kung Pao" Calamari ($11.95) with one of my coworkers. After being fried, the calamari was coated with a perfectly spicy hoisin glaze and tossed with roasted peanuts. I know the picture is blurry, but I had to include it. Even through the fuzziness, I know you want to try some. 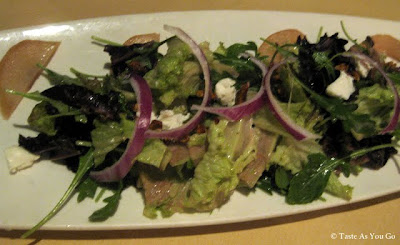 The Crispy "Kung Pao" Calamari made me completely forget that I had also agreed to share the Poached Pear and Pecan Salad ($8.95) served with spiced pecans and dressed with a Lemon Grass Port Vinaigrette. As far as salads go, it was just okay. I thought the dressing was the best part, light and flavorful and not at all overpowering. Unfortunately, the ingredients listed in the name of the dish didn't shine through -- not enough pieces of the pear or the pecans. Sorry, salad, but the calamari was the star of the first course. 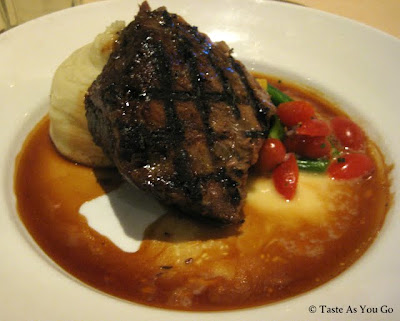 For my entrée, I ordered the Hawaiian Kai-Style Braised Short Ribs ($26.95). How good does that sound? The short ribs were served on a generous dollop of mashed potatoes, with a reduction of the braising liquid. Surprisingly, I shied away from the mashed potatoes, which are normally my favorite part, in favor of the short ribs, which were tender and fell apart at the slightest touch of my fork. The potatoes were much too heavy for my liking, and most of them were left on the plate.

If I were to go back to Roy's (Builders' Show 2012, anyone?), I'd probably skip the short ribs altogether and just order plate after plate of the calamari. That dish was that good. 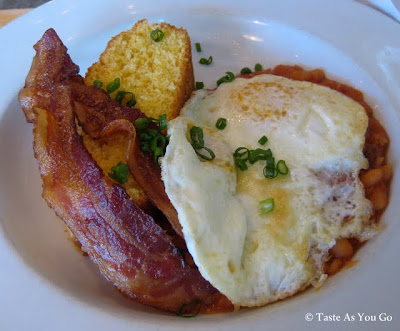 When the long week at the trade show was over, I enjoyed some downtime with Sarah, Stephen's sister, over brunch at Dexter's of Thornton Park. I did as Rachael Ray would suggest and did some research online before making a reservation at Dexter's. I was sold by the price of their Mimosas ($2.95) and by the variety of flavors -- cranberry, mango, orange, grapefruit, peach, strawberry, and pineapple. Of course, Sarah and I wasted no time taking advantage of that kind of deal! 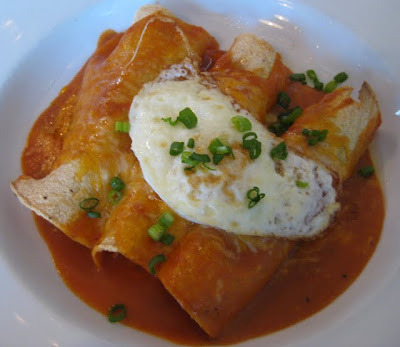 I can't speak for Sarah, who ordered the Fried Eggs with Country Beans, Bacon, and Cornbread, but I thought my meal was pretty damn tasty. I had a hard time deciding what to get, so I asked our waitress for a recommendation, and she suggested her favorite dish on the brunch menu -- the Pulled Pork Enchiladas. The pork was tender and the sauce, when mixed with the warm and runny egg yolk that spills onto the plate after breaking the egg with your fork, went so well with the flavors of the pork. A solid choice in restaurants, a great choice in food, and a stellar choice in company!