When the name of a restaurant forces you to focus on a specific type of cuisine, you automatically assume that the restaurant knows what they're talking about when it comes to that cuisine. Unfortunately, the best part of my meal at SUSHISAMBA park wasn't the sushi.


Back in February, I met up with my friends Linda and Matt (the same friends who watched me eat a chicken foot in Chinatown) for dinner so we could take advantage of Restaurant Week. I arrived a tad early and had to deal with a cocky host who felt it was his duty to remind me that restaurants in New York City no longer allowed smoking. When I stared at him blankly, he told me that my OpenTable reservation stated that I wanted to be seated in the "non-smoking section, if applicable." I just laughed and told him that it's been years since I've updated that profile, and he laughed even harder -- probably to impress the women who flanked him behind the little podium by the door -- and told me that I needed to "eat out more".

Before I allowed the hostess to lead me to the bar area to wait for Linda and Matt, I discreetly left one of my food blogger business cards on the podium. Oh, little boy... You have so much to learn. 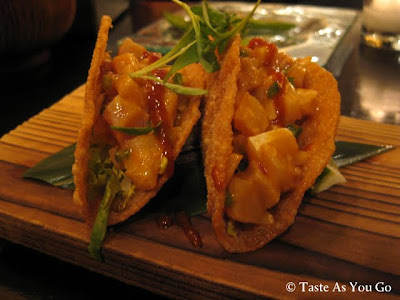 I completely misread the menu and thought I was getting a bargain when I ordered the taquitos. I assumed there were two per order and that each order was $6.00. Nope. ONE taquito is $6.00. And since there is a minimum of two per order, the kitchen placed two on a very lovely wooden platter and then charged me $12.00. As we were reviewing the bill at the end of the meal, I went back to the menu to read the description of the dish again. There it was... in plain English. Damn it. I hate when I fail to actually comprehend something I've read.

Thankfully, the taquitos were quite delicious, with every bite bursting with crisp, clean flavors that were very refreshing for a cold evening in February. The enjoyment derived from eating that dish completely washed away my brief moment of stupidity. 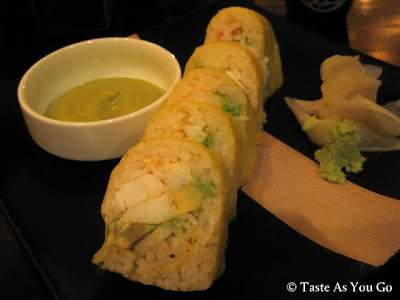 I asked our server for help in selecting my second course. I knew I wanted to try one of the much-exalted Samba Rolls, but I was having difficulty choosing just one. On paper, they all sounded intriguing. Eventually, the server talked me into ordering the Pacific Roll ($16.00), which had King crab, avocado, Asian pears, and rice all wrapped up inside soy paper and served with a side of wasabi-avocado crema. Do you see that picture I took of the dish? It was next to impossible for me to get the Pacific Roll to look anything but monochromatic and boring. (The lighting definitely didn't help.) The ingredients sounded exotic, but the flavor was disappointing. I expected a subtle sweetness from the crab and pear and a rich buttery flavor from the avocado, but all I got $16.00 worth of blah and bland. The only thing that saved it was the wasabi-avocado crema. 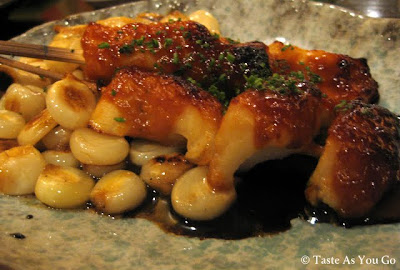 My third course, the Sea Bass and Miso Anticuchos ($14.00) with Peruvian corn, saved the meal from being labeled a disaster. Anticuchos are popular and relatively inexpensive dishes consisting of small pieces of grilled skewered meat that originated in Peru. The meat is often marinated in vinegar and spices before it's cooked. In this case, chunks of sea bass were marinated in miso. The marinade gave the fish an incredible flavor that was slightly sweet and slightly salty, and the fish was so tender that it effortlessly melted in my mouth. As for the Peruvian corn, I was impressed by the size of the kernels. I had never eaten corn kernels that big before. The flavor was subtle and smoky and paired extremely well with the powerful flavor of the anticuchos. Quite a treat.

The meal wasn't what I expected, but I had a fantastic time catching up with Linda and Matt, who are merely a handful of months away from their wedding. I hope we get a chance to meet up for dinner again before they say "I do"!