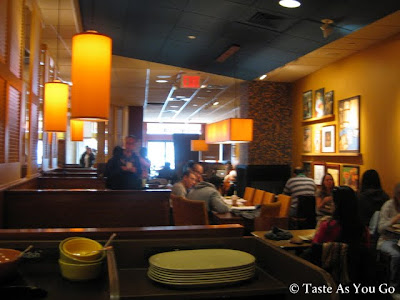 I don't remember exactly when Panera Bread came into my life, but I do remember becoming hooked after my first meal there. Like countless others, I was lured in by the hypnotic powers of their Broccoli Cheddar Soup in a Sourdough Bread Bowl. When I moved to New York City and away from the suburbs, one of the things I was sad about was not being able to run over to Panera and lose myself in that soup. (Yes, I'm serious.) It wasn't long until I began associating going to Panera with going home to visit my family and friends back in Connecticut. Well, just imagine the joy I felt when I discovered that there is a Panera less than five miles away from my apartment! 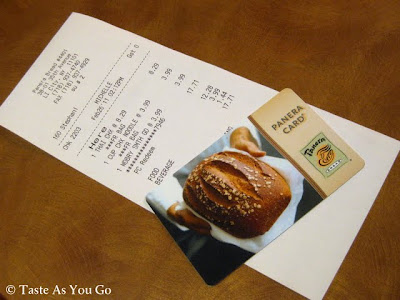 Back in February, I was contacted about the possibility of writing a blog post about some of the new items that Panera began featuring on their Cafe Menu at the beginning of 2011. So, I made plans to meet my friend Amy for lunch and began contemplating my choices. 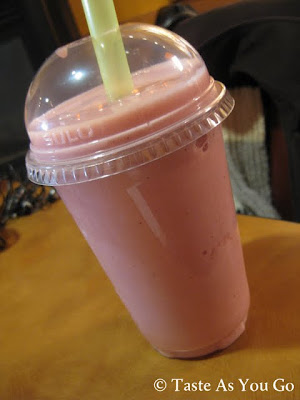 Since I was sent a gift card, I ordered way more food than I normally would. First up? The new Low-Fat Wild Berry Smoothie ($3.99). At first, I was hesitant to order the smoothie since "wild berry" could mean any berry these days and I have an allergy to cranberries. Thankfully, though, this smoothie only contained blueberries and black raspberries along with a base of vanilla yogurt from StonyField Farm.

I loved how the sweetness of the berries played with the tanginess of the yogurt. It's so easy to go overboard on the sugar with smoothies, so this turned out to be a pleasant surprise. With that said, however, I did have one issue with the Low-Fat Wild Berry Smoothie... 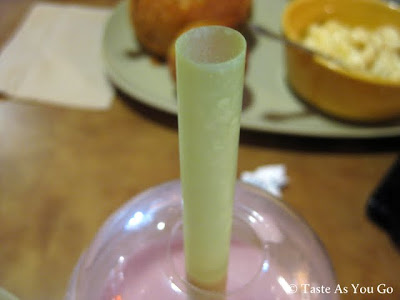 The size of the straw! The opening of the straw was way too big and made for awkward consumption of the smoothie. Granted, the smoothie was on the thick side due to the yogurt, but a standard-sized straw would have done the job just fine. 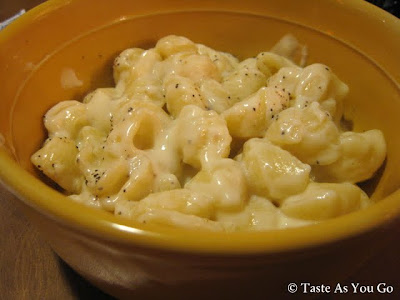 Before I moved onto my next dish, Amy let me try some of her Mac & Cheese, made with shell pasta and a Vermont white cheddar cheese sauce. Apparently, the Mac & Cheese is one of Panera's "Signature Hot Entrees," though neither Amy nor I could remember how long it had been on the menu. While Amy enjoyed it, as evidenced by the empty bowl she cleared at the end of our meal, I found the pasta to be mushy and the sauce to be incredibly under-seasoned. I suppose that's what happens when you make a batch of macaroni-and-cheese and then just let it sit all day until someone orders it. 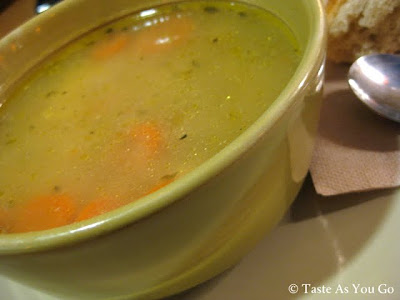 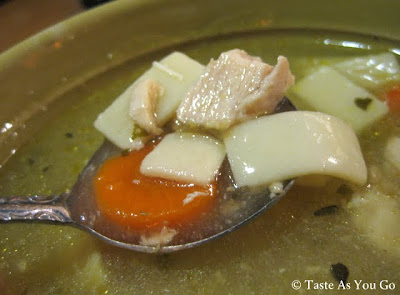 I moved onto the second dish I ordered -- the Low-Fat All-Natural Chicken Noodle Soup ($3.99, small). The menu boasted "fresh vegetables and tender all-white chicken breast" in a "delicately seasoned chicken broth with traditional egg noodles." This soup was about as no-frills as you could get. The typical vegetables (carrots and celery) were there and the chunks of chicken were generous. Unfortunately, the egg noodles resembled the shell pasta from the Mac & Cheese -- they were soggy and, basically, fell apart as soon as I put a spoonful of soup in my mouth. For someone who's trying to "be good" and stay away from the calories in the Broccoli Cheddar Soup, the Chicken Noodle Soup is a decent choice. Just don't expect it to taste like your grandmother's soup. 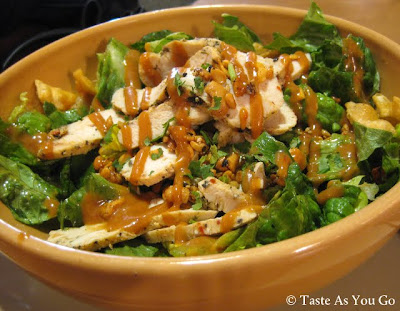 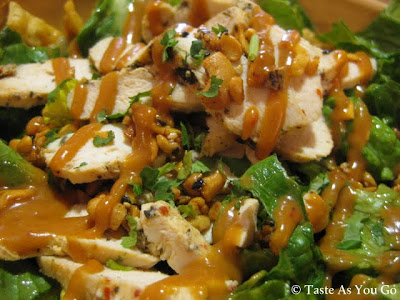 To round out my meal, I had the Thai Chopped Chicken Salad ($8.29). The salad is made with romaine lettuce, wonton strips, fire-roasted edamame, red bell peppers and carrots that's tossed in a Thai Chili Vinaigrette. Then it's topped with strips of seasoned grilled all-natural, anti-biotic free chicken, Thai cashews, fresh cilantro, and a peanut drizzle. It shouldn't come as a shock to you when I say that this salad had a lot going on. Too much, in my opinion.

Every single ingredient was tossed liberally in the vinaigrette, which had a nice spicy kick to it. Unfortunately, the fact that it was also extremely salty overshadowed its spiciness. Also, having the peanut drizzle in addition to the vinaigrette just confused me. I say have one or the other, but not both and definitely not both on the actual salad. If you order the Thai Chopped Chicken Salad, which wasn't, technically, a chopped salad... then do yourself a favor and ask for the dressing on the side so you can control how much of it touches the vegetables.

All in all, Amy and I enjoyed a nice meal while catching up with one another. Despite the music blaring out of the speakers, there were plenty of people gathered at the tables, most of them with books or laptops. Nice to see that the Long Island City (Astoria) location of Panera Bread is such a popular spot to hang out on the weekends. Doesn't hurt that it's right across the street from the movie theater.