Skip to main content
Labels
Posted by Michelle Rittler // Taste As You Go May 05, 2011

A Boxful of Treats from Swiss Maid Fudge 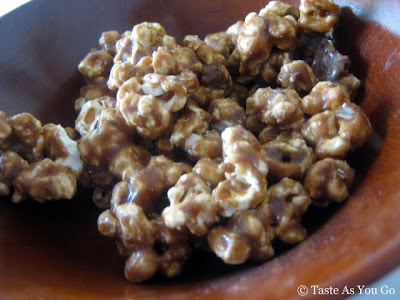 I was provided with product samples at no cost to me. I do not accept monetary compensation for writing about these products or about my experience while tasting them. All opinions expressed are my own.

At colleges and universities everywhere, students are preparing to graduate from school and to move onto the next phase of their lives. Although it's been nine years (!) since my school conferred a Bachelor of Arts upon me, I still reflect on the time I spent in college, especially at this time of year. I can still remember how excited I'd get after finding a pink slip in my mailbox indicating that someone had sent me a package. That excitement would triple if the package had my mother's handwriting on the outside. Inside the packages from home would be bags of homemade chocolate chip or oatmeal cookies, packages of Ramen, boxes of granola bars, cans of fruit, and a note asking me how my classes were going and whether I was eating enough. After college, packages containing homemade treats arrive on a far more irregular basis. 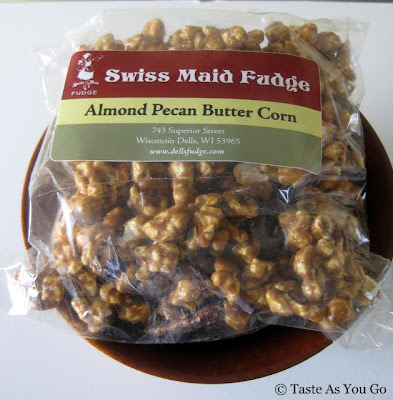 Not too long ago, I received a sampler of goodies from Swiss Maid Fudge in Wisconsin, and included in the box was a handwritten note from owner Jane Heller. After digging through the contents of the package, I couldn't believe Jane's generosity. From popcorn to toffee to caramels to chocolates to fudge, she most certainly gave me a lot to choose from! 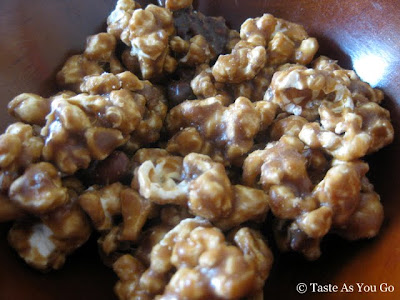 Feeling a bit peckish, I opened the bag of Almond Pecan Butter Corn and began snacking. Before I knew it, I had eaten more than half of the bag! The combination of the extra butter and the nuts was addictive and it took a lot of willpower for me to close the bag and go about my business. It's any wonder that the Rachael Ray Show featured the popcorn as the "Snack of the Day"! 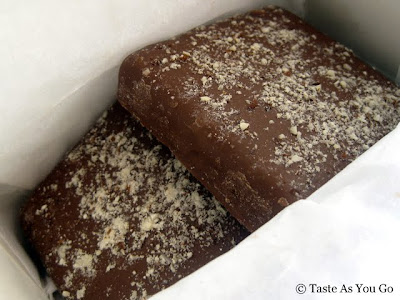 A couple of hours later, I peeked into one of the little boxes and found several pieces of English Toffee that had been hand-dipped in dark chocolate. 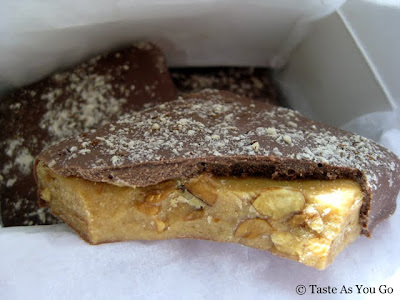 Since there was no easy way for me to cut off a little piece to try, I had no other choice but to take a bite. The toffee had similar flavor characteristics as the popcorn with the combination of butter and almonds, so I fell in love with the flavor immediately. Unfortunately, the size of the toffee pieces made it difficult to eat. After biting into the toffee, the chocolate coating fell right off (and onto my kitchen floor). I have a tendency to suck on toffee so it slowly melts away in my mouth, so I think the toffee would have been more manageable for me if the pieces were smaller. 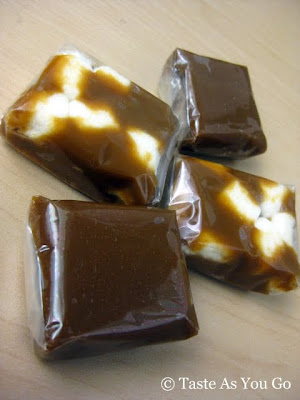 At the rate I was consuming the treats from Swiss Maid Fudge, I knew I was going to need help. Thankfully, my office is filled with folks who love sweets. I divided up my supply of Buttery Caramels between my coworkers, saving one of the Vanilla Marshmallow Cowmels for me. 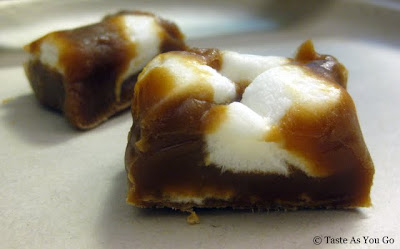 So. Friggin'. Good. The softness of the caramel paired perfectly with the softness of the mini marshmallows that were tucked inside. The caramel was so light and airy, I practically forgot I was eating candy. After I finished eating the "cowmel," I was instantly saddened by the fact that I gave the other caramels away. I wanted another one! 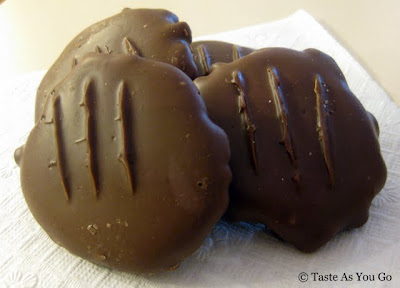 For an afternoon snack, I shared the box of Turtles that Jane sent. I didn't really want to share them since they're my favorite, but I knew I'd pay for it dearly if I ate them all myself. 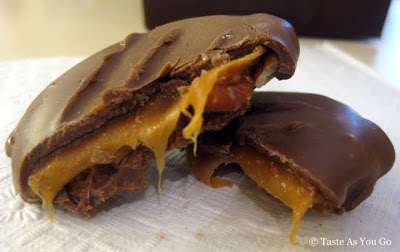 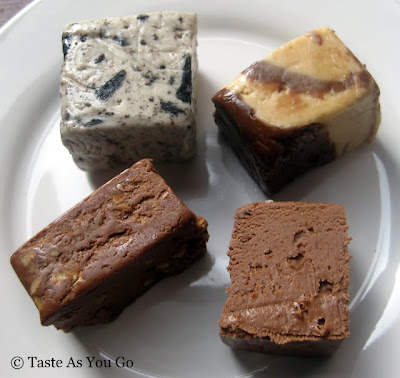 Heaven on a plate. 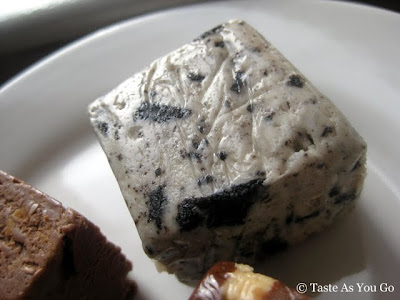 The Cookies 'n Cream Fudge tasted as if someone had pulverized the cookie part of an Oreo and then mixed the cookie bits into the cream from the center. 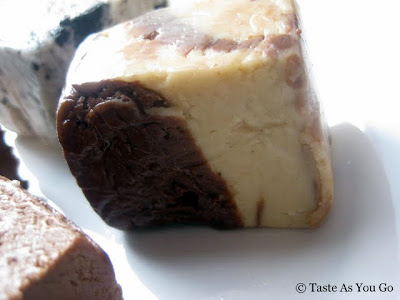 The Peanut Butter Fudge was my favorite of the four. Rich and creamy and just the right level of peanut butter flavor. 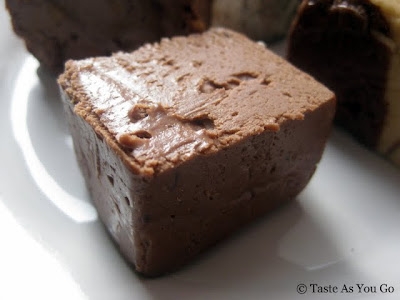 After the decadence of the Cookies 'n Cream Fudge and the Peanut Butter Fudge, I was underwhelmed by the Milk Chocolate Fudge. It was my own fault, though. I should have started with the "theme" before experimenting with the "variations". 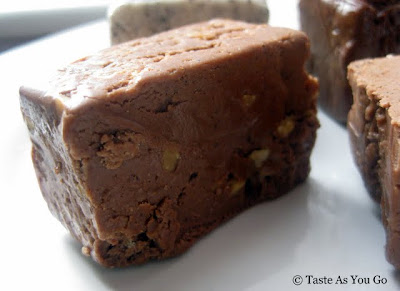 To round things out, I tried a little of the Snickers Fudge. True to its name, it tasted just like the candy bar, exception with considerably fewer nuts. The sweetness of the chocolate really shined through.

All of the confections and fudge at Swiss Maid Fudge are made using the old European method -- cooking the candy in copper kettles oven open cast iron gas stoves. If you happen to be in the Wisconsin Dells area, you can stop by the store and watch the candy crafters at work in the open-viewing kitchens.

Thank you, Jane, for spoiling me with your delicious treats and for helping bring back some fond memories of college!