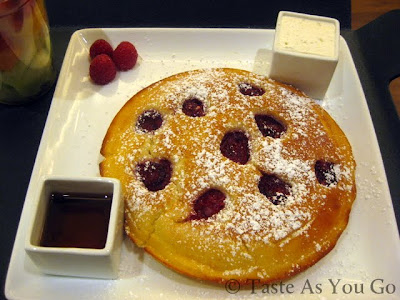 You know, they don't mess around in Las Vegas. Something as innocent as catering a craving for pancakes at breakfast can quickly turn into a bells-and-whistles affair.

I traveled to Las Vegas back in April for work, and to make up for having to bail out early on Easter Sunday festivities in order to catch my flight, I indulged a bit. Sleepy-eyed, and in desperate need of coffee, I padded down to the lobby of my hotel and into Delights, where I grabbed a table near an outlet. The plan was to catch up on email over breakfast before heading over to the convention center. 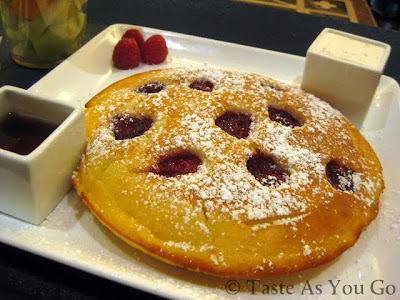 Although, I would have been satisfied with a bagel and cream cheese, I couldn't ignore the tempting call of the Lemon Raspberry Pancake. Funny, because I'm not normally a pancake-kind-of-girl. I placed my order at the counter, settled myself at my table, and sipped my coffee. Slowly, I started scrolling through the emails that were already waiting for me thanks to the time difference between Las Vegas and New York. 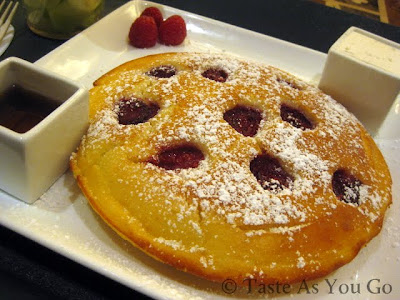 When my breakfast came out, I was in awe. Seriously, the biggest pancake I'd ever seen. And perfectly round! (That thing had to have been made with a mold.) The lemon in the pancake itself made the dish taste fresh and bright, and I loved how the smell of citrus lingered in the air above the plate.

With the fresh raspberries tucked inside, the pancake took on a sweetness and a tartness that didn't need embellishment from the maple syrup or whipped butter that was generously provided on the side. For the sake of experimentation, I dipped pieces of the pancake into the syrup and quickly concluded that things got too sweet after doing so. The pancake was delicious as is.

If you're staying in The Signature, definitely consider stopping by Delights in Tower 2. Seriously killer pancakes. Or, um, pancake, to be more accurate.