SUSHISAMBA strip at The Palazzo 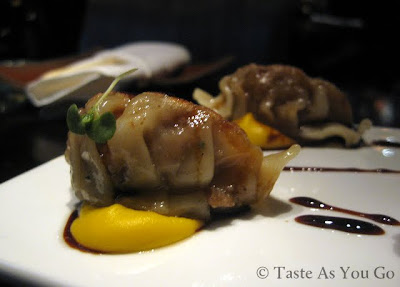 When someone mentions Las Vegas, what type of food do you think of first? I'm not a betting woman, but my money is on all-you-can-eat buffets where you can load your plate with a little bit of this and a little bit of that. I'll go so far as to bet that, maybe, a handful of you said sushi.

Don't worry... I wouldn't have answered sushi either. 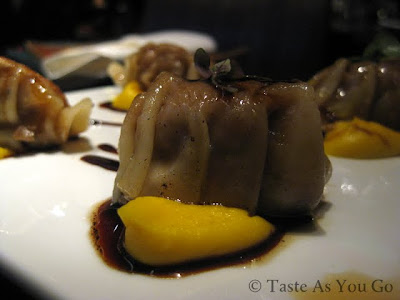 Berkshire Pork Gyoza at SUSHISAMBA strip in Las Vegas
If it weren't for my coworker's birthday, which coincided with our trip to Las Vegas back in April, I would have skipped sushi altogether. But the sushi craving was strong, too strong to ignore. After freshening up after a full day at the trade show, we hopped in a cab, headed to The Palazzo, and prayed that the way for a table at SUSHISAMBA strip wouldn't be too long.

When I wasn't trying to disguise the rumbling sound in my stomach, I was psyching myself up for the meal, hoping that it would be a repeat of the dinner I had at SUSHISAMBA park in New York. I vowed to be more careful upon ordering and took my time poring over the menu. To start, I had the Berkshire Pork Gyoza ($14) with kabocha pumpkin puree and su-shoyu dipping sauce. These dumplings were everything I wanted them to be. The filling had tremendous flavor and the meat stayed moist within the dough, which was just the right thickness to provide heartiness and that little bit of chew. The pumpkin puree provided a pleasant sweetness and helped balance out the saltiness of the dipping sauce. I'd eat this dish every day for the rest of my life if I could. 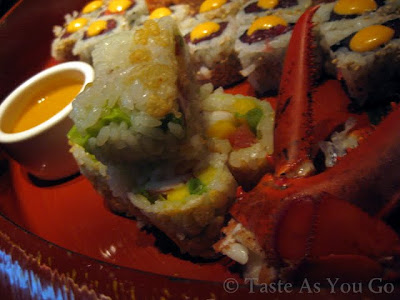 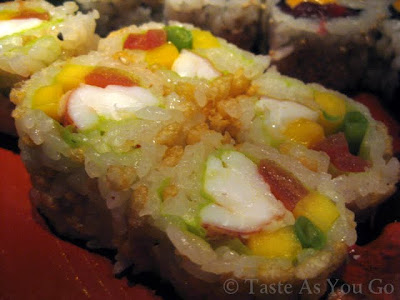 Samba Strip Roll at SUSHISAMBA strip in Las Vegas
In addition to the traditional Salmon Roll, I ordered one of the specialty Samba Rolls -- the Samba Strip Roll ($19). Maine lobster, mango, tomato, chive, and crispy rice are wrapped in soy paper and served with a peanut curry sauce for dipping. It only took eating one piece of the Samba Strip Roll for me to fall in love with it. The lobster's succulent sweetness was accentuated by the mango, and the chive added the right amount of bite to balance out the flavors. Tying everything together was the peanut curry sauce, with its moderate level of heat. Crazy good!

Should I ever find myself back at one of the New York locations, I know I'll have two fallback dishes to rely on if I'm not feeling particularly adventurous. And while I know I didn't really have a say in the matter, I'm so happy I was able to give SUSHISAMBA another chance. God bless coworkers' birthdays!