Tapas on the Table at Jaleo 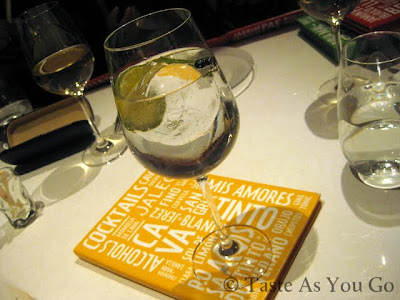 Even though I'm still reeling over the news of next week's trip to Los Cabos, it's time to get my head out of the clouds and get back to business. I'll be keeping Mexico on my mind, but I'm going to steer you all back to Las Vegas while I'm doing it.


As you may remember, I traveled to Las Vegas for work at the end of April. After a full day of prepping for the official start of the trade show, a group of us piled into a cab and headed over to The Cosmopolitan for dinner. It was difficult to ignore the bells and the music coming from the casino and even more difficult to ignore the luscious clothes in the windows of all the stores. But we navigated around the distractions successfully and grabbed a table at Jaleo, the award-winning tapas restaurant by José Andrés and his ThinkFoodGroup. 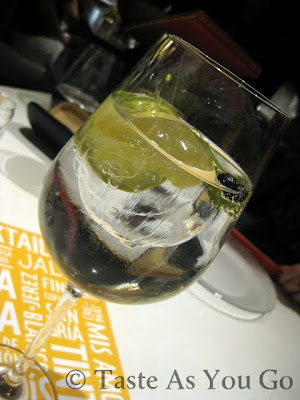 To get things started off on the right foot, we ordered a round of drinks. I was tempted by the sangria until I saw Jose's Gin & Tonic ($16) on the menu, billed as "the best gin and tonic you'll ever have..." Well, folks, they weren't foolin'.

Three words: smooth, refreshing, dangerous. I say "dangerous" because the drink was mixed so perfectly, you couldn't taste the alcohol. Which, of course, meant you had to drink more because you were positive that you'd find the alcohol by the fifth or sixth sip. Needless to say, I only had one. I loved that the drink was presented in a wine glass with one large sphere of ice rather than multiple ice cubes. The drink stayed cold throughout the meal but didn't get watered down too quickly. Everyone should serve drinks on the rocks like that. 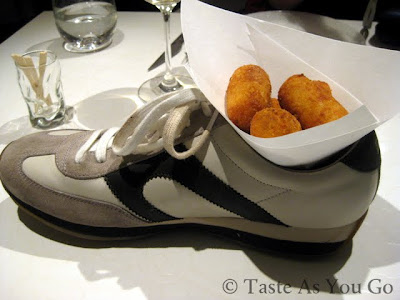 Since Jaleo is a tapas restaurant, our server recommended that we order 3-4 plates per person in order to ensure that we had enough food. To start, we shared the Croquetas de pollo ($10), or traditional Chicken Fritters. Imagine our surprise and our amusement when the fritters were presented in a cone of paper tucked into a sneaker!

At first, I thought the kitchen was playing a joke on the folks from out of town, especially since it seemed we were the only table preparing to eat food out of a shoe. But our server promised that the shoe was standard. Chef Andrés loves whimsical presentations that serve as conversation pieces, and he certainly got our attention with that one! The fritters were heavenly and, to me, tasted like deep-fried chicken pot pie. I wanted more but stopped myself from ordering more since I still had three more dishes to go. 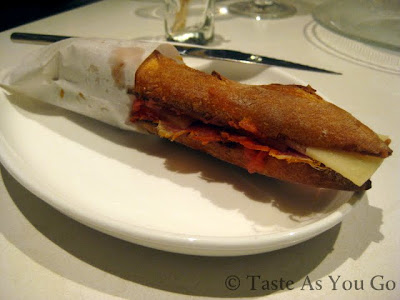 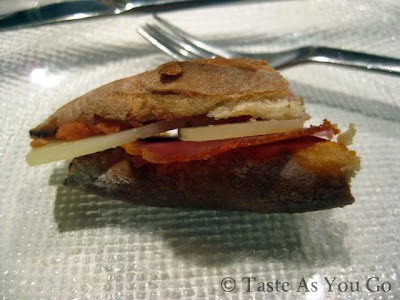 Next to come out was the Flauta Bread with Cured Pork Loin and Manchego Cheese ($13). One end of the sandwich was wrapped with paper, practically inviting me to pick it up and take a big bite out of the other end. However, since we had agreed to share, I made use of the knife and divided the sandwich into smaller pieces.

The crust of the bread made it difficult to cut, especially after I had started drinking that G&T... Thankfully, it was worth the effort, as the sandwich was absolutely delicious. I loved how the flavors played off of each other -- the sweetness of the tomatoes, the fruitiness of the extra-virgin olive oil, and the saltiness of the pork loin and the cheese. Another winner! 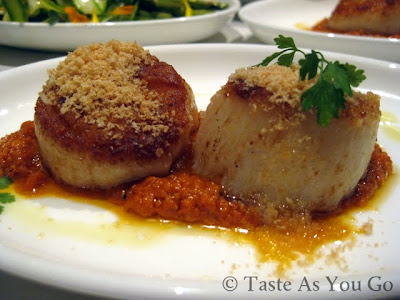 The next dish came out just as I was chewing the last bite of the Flauta Bread with Cured Pork Loin and Manchego Cheese. I was craving a little bit of seafood, so I ordered the Vieiras con Salsa de Romesco ($10), or Seared Scallops with Romesco Sauce.

The scallops were gorgeously plump, expertly seared, and delicately seasoned -- the perfect vehicles for the most outrageous Romesco sauce I had ever tasted. When I was finished with the scallops, I wanted to lick the remaining sauce off the plate and came extremely close to testing the saying "what happens in Vegas, stays in Vegas." But I caught myself in time. I remembered my manners. And I pushed the plate away from me before I embarrassed myself. 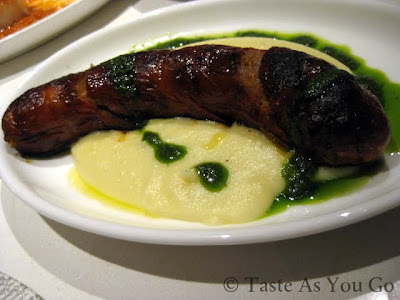 My last dish wasn't on the regular dinner menu. it was one of the specials of the night - Chorizo with Olive Oil Mashed Potatoes and Parsley Puree. It's any wonder why I was drawn to that dish. Truth be told, I was nearly full at this point of the meal and wasn't sure how much more I could eat. Of course... Just as the one dish I was eager to try reached the table.

While the chorizo was flavorful and had the right amount of heat and spice for me, I thought the mashed potatoes were just okay and a victim of under-seasoning. Had I had the chorizo and mashed potatoes earlier in the meal, I know I would have been vocally appreciative of the parsley puree since it lightened up (and brightened up) an otherwise heavy dish.

Not exactly the way I wanted to end the meal, but I truly enjoyed myself. If I'm ever in Las Vegas again, I'm going back to Jaleo for another G&T and two or three shoefuls of chicken fritters. And I promise to allow enough time to try the famous paella that I skipped over last time.