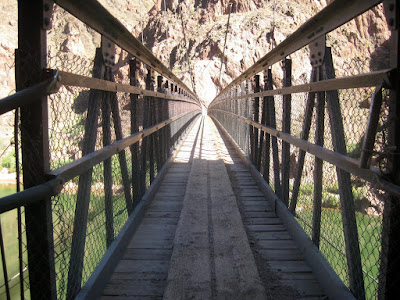 Suspension Bridge at Base of the Grand Canyon

It's been a long week. The first full week of my new weekday routine and my new commute into the city. I'm out of bed by 5:30am and out the door by 6:20am so I have time to stop at Dunkin' Donuts (a necessity now rather than a luxury) before driving to the bus station for the 6:40am bus. Two-and-a-half hours later, I'm in New York and at my desk... with my second coffee of the day. After putting in my full day at the office, I make the return trip home and am flopping down on the couch any time between 8:00-8:15pm depending on traffic and how fast the bus driver decides to go.

As I said... it's been a long week. Before I fall asleep from utter exhaustion, let me get on with this week's Feed Me Friday post.

Given my new schedule, I've been bookmarking recipes online and in my cookbooks that can prepared in a relatively short period of time with minimal ingredients so the burden of cooking the evening meal wouldn't fall entirely on Stephen's shoulders. When I found the recipe for Pan-Fried Tilapia with Lemony Baby Arugula Salad on Always Order Dessert, I bookmarked it immediately.

Not only is the meal quick and easy to bring together, but the recipe also provides instructions for preparing a single serving of the fish and the salad. Alejandra makes it simple for us to make as much as or little as we need! Thanks, Alejandra!

Sweet Spin on the Seasonal Sandwich

In the summertime, one of my go-to meals is the Caprese Salad. Slices of plump tomatoes and creamy mozzarella arranged beautifully on a plate with leaves of fresh basil tucked in between them? Heaven. Life gets even better if you drizzle some extra-virgin olive oil and balsamic vinegar over the top. If I'm feeling particularly industrious, then I'll layer those ingredients on a baguette and add slices of fresh avocado.

It's all about keeping things simple.

But did you ever stop to think what would happen if you took tomatoes out of the equation and replaced them with something else? What about nectarines? No?

Then check out the pictures of the Summer Tartines with Mozzarella, Basil, and Nectarines from The Kitchn. When you're done drooling, add nectarines to your shopping list so you can make these fabulous open-faced sandwiches the next time you're trying to turning on the stove or the oven.

Don't get me wrong. I love chocolate eclairs. Especially the ones my stepmother makes. But, every now and then, it's a good idea to change things up. As with the tartines above, it's easy to put a spin on a classic recipe just by using fresh fruit.

Thanks to Pinterest, I found a luscious recipe for Strawberry Basil Eclairs on Chasing Delicious. The inside is stuffed with Bavarian cream and macerated strawberries while the outside is dusted with a fine layer of powdered sugar instead of chocolate. Divine!

Go ahead. Try them. You know you want to.

And I won't even tell anyone that you licked the bowl containing the Bavarian cream clean.

If Butter Has Fruit In It, Then It's Healthy... Right?

Speaking of fruit... Have you seen the recipe for French Toast with Berry Butter on The Pioneer Woman? Topping French toast with sliced berries isn't uncommon, but how many times have you seen fresh berries whipped into butter meant to be served on top of the warm bread?

Ree walks us through the preparation of two different types of berry butter -- raspberry and blackberry -- but I'm sure her method will work with any type of berry you'd like. Just remember to use berries that are in season to get the maximum flavor.

Instead of grabbing an extra hour of sleep on the bus this morning, I was busy working on a new feature on Taste As You Go -- the Events Calendar! The calendar lists Upcoming Food Events that are open to the public based on the information I receive from official press releases and announcements from PR agencies. Just because I can't attend everything doesn't mean you can't!

Even though I'm based in New York (and the Lehigh Valley), I'll be listing events being held all over the country so as many people can benefit from the information as possible. In fact, the first (and only) event on the calendar so far is a cooking class in Las Vegas on August 13th. Yet to be added are some more cooking classes and a five-course Russian dinner night.

If you're looking for something to do that's food-related, then be sure to check the calendar on a regular basis. You might just find an event happening near you! Also, feel free to contact me with information about events that you may have heard about or are organizing/hosting.

Okay, that's enough from me for tonight. Have a great weekend, everyone!