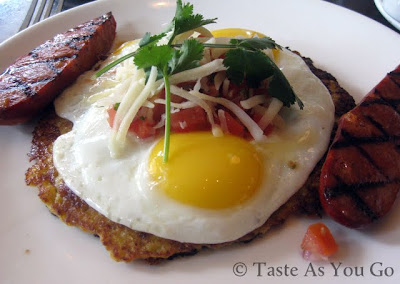 Arepa con Chorizo at Stephi's on Tremont in Boston

I've said before that I consider taking a stroll up and down Newbury Street a must-do activity whenever I'm in the Boston. Another activity on the must-do list? Eating brunch at Stephanie's on Newbury. Granted, I've only had brunch there a handful of times, but I still smile and get all giddy when I think back to the meals I've eaten on those visits.


When I was planning the trip Stephen and I took to Boston back in May, I gave myself a pat on the back, thinking I had our weekend brunch plans all locked up. Wrong. I was hasty in giving myself props. As I remembered that Stephanie's on Newbury only serves brunch on Sundays, I could feel the disappointment wash over me. We were scheduled to head back to New York on Saturday evening. 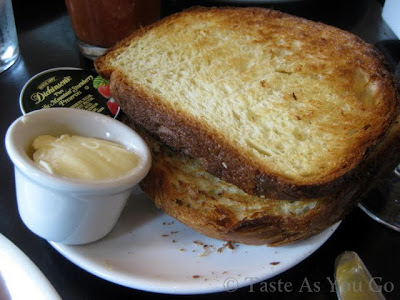 Brioche Toast at Stephi's on Tremont in Boston


In an act of desperation, I checked the website one more time, thinking that I could will the restaurant to change their weekend brunch schedule to include Saturdays. That's when I noticed there was a second location -- Stephi's on Tremont in the trendy neighborhood of South End. I crossed my fingers as I clicked through to review the listing of menus...

There was a brunch menu! They served brunch on Saturday! And they had a table available! Jackpot! 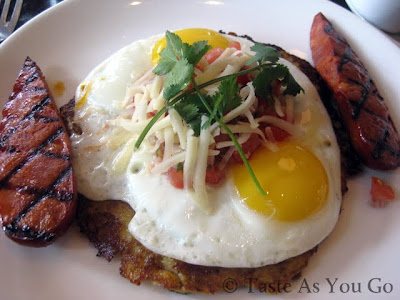 Arepa con Chorizo at Stephi's on Tremont in Boston


Upon arriving at the restaurant, I noticed the obvious differences in the two locations. Stephi's on Tremont was significantly smaller than its sister restaurant, and there were only a few tables outside on the sidewalk. Neither mattered to Stephen or me, especially once we opened the menu and began the tedious task of choosing what to eat. 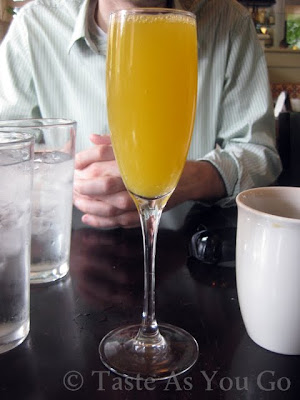 
Since the whole trip was planned in honor of my then upcoming birthday, I felt it was appropriate to celebrate with cocktails to go along with our coffee -- a Badger Bloody Mary ($13) for Stephen and a Stephi's Mimosa ($10) for me. I love a mimosa with brunch!

But the star of the show was the Arepa con Chorizo ($13). (Are you shocked that I ordered the dish that came with the chorizo? Yeah... I didn't think so.) A large Columbian-style corn cake, topped with two eggs cooked sunny side up and roasted pico de gallo, was served with grilled chorizo on the side. Although the dish was presented beautifully, it was meant to be wrecked by knife and fork so the yolk of the eggs could spill out over the perfectly cooked egg whites, creating a lusciously rich river of gold on the plate. The corn cake was surprisingly light in texture and provided an underlying subtle sweetness that balanced out the smokiness from the chorizo. Hearty and decadently filling, the Arepa con Chorizo rendered the side of Brioche Toast ($2) I ordered completely unnecessary.

Our brunch at Stephi's on Tremont proved to be just as enjoyable as the brunch we had a Stephanie's on Newbury all those years ago. Now I know where to go should we ever find ourselves faced with another scheduling issue.