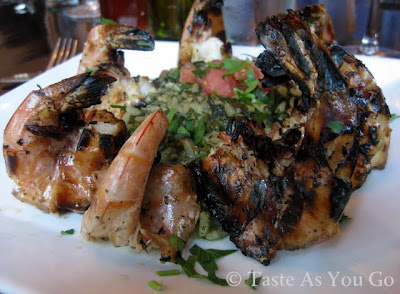 I can remember when spending time in and around Port Authority meant spending an occasional weekend away from the city. Or, if I dared to venture a little bit north, it meant getting together with friends and exploring the restaurants in the neighborhood. Now, Port Authority is a regular stop during my day. I equate my walk between the bus terminal and my office with a game of human Frogger, trying to navigate my way past fellow commuters, groups of tourists in Times Square, and the flow of traffic as quickly as possible.

Oh, what a difference a few months make. 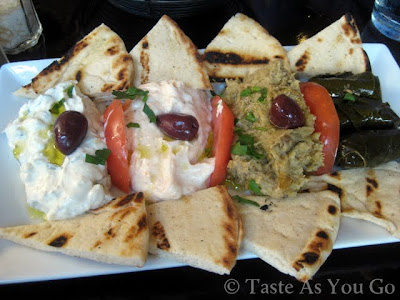 Given that I'm typically focused on getting from Point A to Point B with a minimal number of hurdles, I don't allow myself to take in the sights and many things go unnoticed.

Unless we're talking about the guy that stands outside of Madame Tussaud's with the ferrets on his head. I notice him every time. But I digress.

Had it not been for a recommendation from my friend Brian, I would probably still be in the dark about the existence of a charming Greek restaurant right across the street from Port Authority. Back in May, we chose to celebrate the reunion of the Lehigh Dinner Club at Dafni Greek Taverna. To make the occasions even more momentous, Brian, Kym, and I were joined by our former Wind Ensemble director and his wife!

After considering all of the options on the extensive menu, we placed our orders and then dug into the Pikilia ($11.95), an offering of assortment of three spreads served with warm pita and dolmades (grapevine leaves stuffed with a mixture of rice and herbs). We chose the Tzatziki, made with yogurt, cucumber, garlic, and dill; the Taramosalata, made with fish roe, lemon juice, and olive oil; and the Melitzanosalata, made with pureed baby eggplant, garlic, lemon juice, and olive oil.

The Tzatziki was unlike any I had had before. Cool and creamy thanks to the cucumber, but with a definite body and substance to it. The garlic was there without overpowering the more delicate flavors, and the dill added a nice freshness to the whole dish. Subtle. Quite unlike the Taramosalata, which carried a stronger flavor due to the fish roe. Although the flavors were lightened somewhat by the lemon juice, I found it to be a little too strong for my tastes. So, after trying the Taramosalata, I focused my attention on the Melitzanosalata, my favorite of the three spreads. It's no surprise that I favored the eggplant dip... We all know how I feel about eggplant dip. 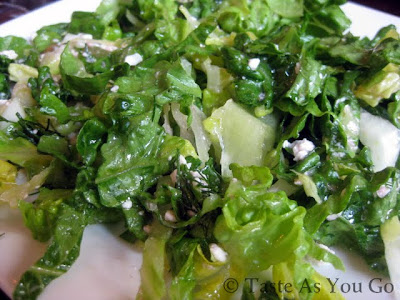 Maroulosalata at Dafni Greek Taverna in New York
Now, I had every intention of ordering the Chicken Souvlaki ($14.75) for my entree. But something came over me. That annoying little voice in my head scolded me for settling on chicken, and by the time the responsibility of ordering had fallen to me, I had changed my mind. Instead of chicken, I went with the Grilled Shrimp ($20.75), served over a heaping scoop of Spanakorizo (rice with spinach, onions, and herbs) and a side of Maroulosalata (Romaine lettuce, scallions, feta cheese, and dill tossed with a lemon vinaigrette). 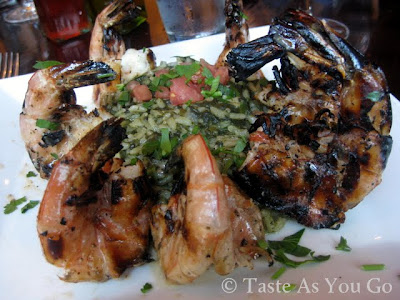 Charcoal-Grilled Shrimp over Spanakorizo
at Dafni Greek Taverna in New York
I loved the simplicity of the salad. A handful of ingredients combined in just the right way to create something memorable. The lettuce was crisp, the scallions and dill added subtle layers of flavor that were complemented by the salty creaminess of the feta and brightened up by the lemon vinaigrette. So, so good.

What I loved even more about the Maroulosalata was how it played off of my main course. The shrimp, seasoned with salt and pepper and, I'm guessing, a bit of olive oil, took on a delicious smoky flavor that can only be achieved by grilling over charcoal. I took great satisfaction in licking the blackened bits off my fingertips.

Yes, in public. Yes, in front of my friends.

But, let's talk about the Spanakorizo. That lusciously creamy pile of rice that accompanied the shrimp. I could have eaten a bowl full of that rice and would have walked away from the meal perfectly content. Everything about the rice was warm and comforting and made me think about curling up with a bowl of it on a rainy day.

A serving of rice had me wishing for a rainy day. Pure magic. 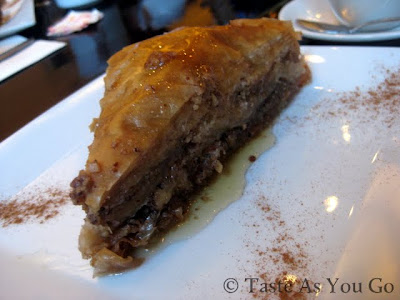 After all of that, I didn't think I had enough room for dessert. Against my better judgment, I ordered a piece of Baklava ($5.50). Our server assured us that their baklava was the "best in the neighborhood" and curiosity took over. Now, I haven't eaten every version of baklava in that neighborhood, so I can't fully endorse our server's opinion of the traditional dessert, but I can say that it was damn good.

I don't regret ordering it that night, but I do regret not asking our server to wrap up the half I didn't eat so I could enjoy it later.