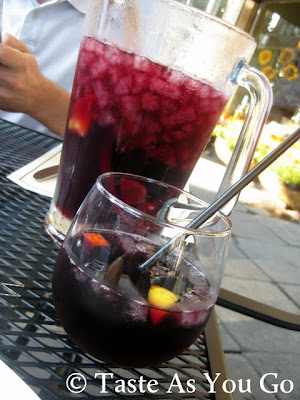 Classic Red Sangria at
Tapas on Main in Bethlehem, PA

As with countless other Friday evenings, this one started off with the typical "what do you want for dinner?" conversation, where Stephen and I would bounce ideas off one another as if we were volleying a ball back and forth in a game of tennis. Attempts at playing an actual game of tennis always ended in utter frustration, so it wasn't long before our conversation concluded with indecision on the part of both players. Stephen then reminded me that we had yet to try the new tapas bar in town, so we got in the car and headed to Tapas on Main. 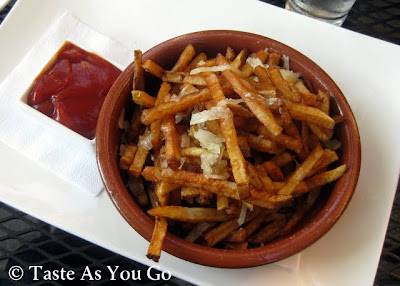 Papas a la Francesa at Tapas on Main in Bethlehem, PA

It was a beautiful night, so we grabbed a table on the sidewalk rather then opting for a table indoors. And, since we had heard positive things about their sangria, we ambitiously ordered a pitcher of the Classic Red Sangria ($28). Light and refreshing, the sangria was just the thing to help us welcome in the weekend; though, I would have preferred more fruit. Unfortunately, despite our best efforts throughout the meal, we were unable to finish the whole pitcher. Had we been dining with friends, the pitcher would have been the appropriate way to go. But just the two of us? Unwise move. 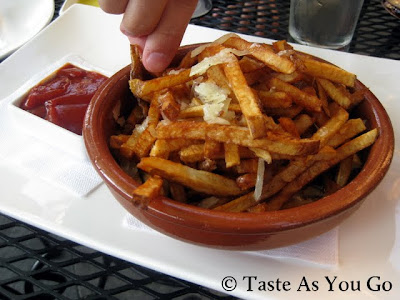 Papas a la Francesa at Tapas on Main in Bethlehem, PA

Although, Tapas on Main does offer several main courses, including paella, grilled skirt steak, and, surprisingly enough, two different ravioli dishes, Stephen and I stuck to the tapas, choosing to share a few dishes rather than order for ourselves. I picked one, he picked one, then we collaborated on the third one. It was all very democratic.

My choice? The Papas a la Francesa ($5.95), hand-cut fries topped with shaved Manchego cheese and drizzled with truffle oil. The portion was generous enough and I was pleased to find that neither the piquancy of the cheese nor the aroma of the truffle oil was overpowering. Out of curiosity, I did dip a couple of the fries into the accompanying bowl of ketchup, but I preferred them "as is", with nothing but the embellishments of the cheese and the oil. A nice set-up to what came next. 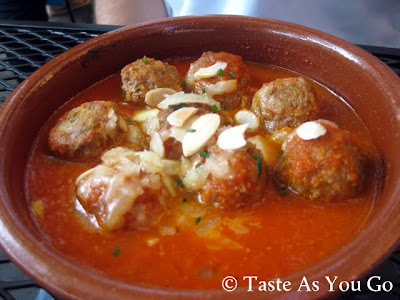 Albondigas de Cordero at Tapas on Main in Bethlehem, PA

Stephen based his choice on word-of-mouth and ordered the Albondigas de Cordero ($8.95). What arrived was a crock of lamb meatballs nestled in a pool of Romesco sauce and then topped with shaved Manchego cheese and slivered almonds. I loved the sweetness of the sauce and the contrasting crunchy texture of the almonds, but I wasn't all that impressed with the meatballs themselves. The meat was tough and dry, and I wound up dipping pieces of my bread into the sauce rather than focusing on the meatballs. 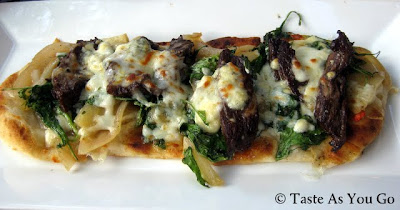 Coca de Churrasco at Tapas on Main in Bethlehem, PA

Now the dish we decided on together -- the Coca de Churrasco ($10.95). Tapas on Main offers Spanish flatbread topped four different ways, and in our case, we went for the flatbread topped with skirt steak, sliced apples, caramelized onions, arugula, and Valderon cheese. Stephen and I typically avoid dishes with blue cheese (Valderon cheese is an intensely flavored blue cheese made from either cow's or goat's milk), but we liked the sound of all of the other ingredients that we just went with it. 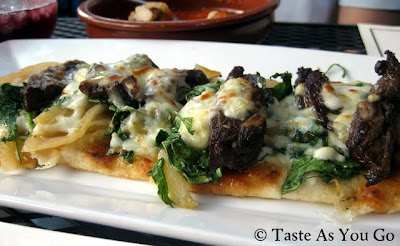 Coca de Churrasco at Tapas on Main in Bethlehem, PA

Yes, the flavor of the cheese was powerful, the aroma of it jumped from the plate to the nose quite quickly, but everything else helped mellow the flavor. The chef was certainly demonstrating his culinary skills, crafting the dish in a way that balanced the flavors and really allowed the unique profiles of the individual ingredients to shine. The skirt steak was grilled perfectly and went well with the sweetness of the apples and caramelized onions. Yet, to avoid things moving over too far on the sweet side of the flavor spectrum, the peppery arugula the blue cheese pulled things back. I actually thought it was an ideal dish to end on after having eaten the truffled fries and lamb meatballs.

Regardless of the amount of sangria we left in the pitcher or the number of dishes we tried, I'll always look back fondly on our evening at Tapas on Main. Not too long after we settled the bill, Stephen proposed... and I said yes!