Winding Down at Corner Shop Cafe 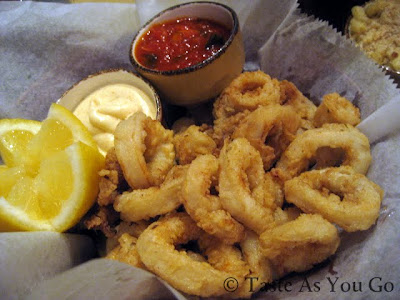 Not true, not true!

I've had you on my mind every time I attempted to write a new blog post while on the bus only to have the wireless network on the bus fail me. And I've thought about you every time I've flopped down on the couch, exhausted by my long commute. As much as I wanted to sit there and update, I knew it would be better for me to just sit. But now that I've fallen into my new routine, I'm ready to get back to blogging on a regular basis. 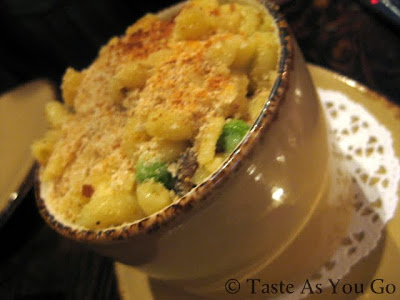 After a grueling afternoon getting manicures and shopping in SoHo, my girlfriend and decided to grab a drink and a little nosh at Corner Shop Cafe on the corner of Broadway and Bleecker. I was struck by the coziness of the restaurant immediately upon entering and was taken with the mixture of textures -- exposed brick wall, mismatched wooden chairs, metal panels on the ceiling. Based on ambiance alone, I could easily see myself there enjoying multiple cups of coffee over brunch and the Sunday Times.

Since neither of us were especially hungry, we decided to order a few dishes to share. We settled on the Crispy Calamari with Lemon Aioli and Spicy Marinara ($11), the Truffled Mac N Cheese ($7, small; $13, large), and the Brussels Sprouts with Shiitake Mushrooms and Bacon ($6). 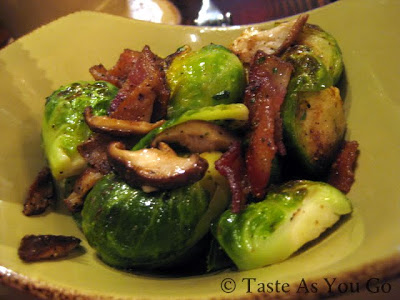 The calamari lived up to their name and came out of the kitchen crispy and delicately salted. While I surrendered the aioli to my girlfriend, I devoured the marinara sauce. The spiciness provided a nice change from the typical side of marinara sauce. My Sam Adams lager went quite nicely with the dish.

I was less impressed with the macaroni-and-cheese. The truffle flavor wasn't overly powerful, but I thought there was too much going on in terms of the other ingredients. The fresh peas lightened up the dish, but I was confused by the shiitake mushrooms. While I don't think they necessarily ruin the dish, I did think they were superfluous. I let my girlfriend have the majority of the Mac N Cheese.

Thankfully, we both loved the Brussels sprouts. The sprouts themselves took on a subtle sweetness from their light caramelization, and that subtle sweetness was balanced by the saltiness of the bacon. Now, here's where the presence of the shiitake mushrooms was welcomed without question. The mushrooms added another layer of meatiness to the dish without weighing everything down. Actually, if we had doubled up on our order of the sprouts, I would have been perfectly happy.

Eating out may not have been on our original agenda, but I'm glad we decided to extend our afternoon so we could spend some time at Corner Shop Cafe. I hope to get back there one weekend to check out their brunch menu!