A Taste of Los Cabos: Tour of Grand Solmar and Dinner at La Roca 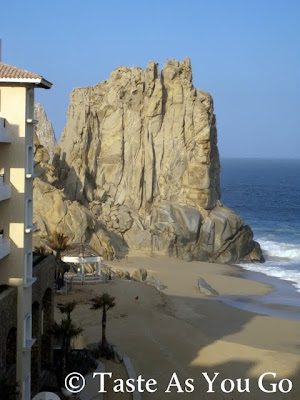 I was provided with the opportunity to travel to Mexico on this press trip at no cost to me. I did not accept monetary compensation for writing about the trip or about my experiences while in Mexico. All opinions expressed are my own.

The rain that fell yesterday morning was a gentle rain. Sporadic and light, it inspired me to bake a quick bread full of cinnamon, carrots, and cashews (recipe to follow). The rain that fell for a good part of the evening was a heavy rain. Steady and fat, it not only inspired me to cook a dish that I haven't had in years, but it also inspired me to sit down and work out the final kinks in the series of blog posts detailing the press trip to Los Cabos I went on at the end of June. Ironic, since we didn't see a spot of rain the entire time we were in Mexico. 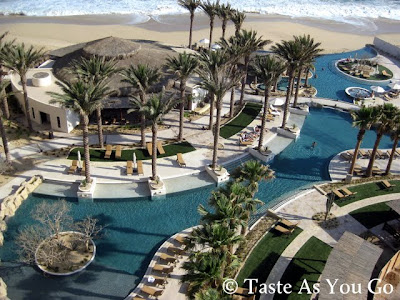 The trip from New York took a little longer than planned due to mechanical issues with the plane on the leg from Houston to Los Cabos. After finally boarding, I arrived in Mexico without further incident, cleared Customs, and successfully dodged the aggressively persistent timeshare and activity vendors who stood between the baggage claim area and the exit out into the hot sun. It was a bit chaotic outside of the airport, but, thankfully, the driver of my shuttle to the hotel spotted me before I spotted the tiny sign he was holding with something that vaguely resembled my name on it.

Alvaro (the driver) handed me a bottle of water, took my luggage, and led me over to where the van was parked. During the drive, I had him tell me more about the sights I saw along the way, but once he found out that I was "from New York," our conversation quickly shifted.

What was it like to live and work in a place with so many people? Did I ride the subway often? Did I spend a lot of time in Times Square? What was my favorite spot in the city? I couldn't keep up with all of his questions!

Alvaro and I talked practically non-stop between the airport and my designated home-away-from-home for the duration of the press trip, Grand Solmar Land's End Resort & Spa. After tumbling out of the shuttle van, I received a friendly greeting from the several members of the hotel staff, who were kind enough not to laugh at my clumsiness. I was also able to finally meet Rose, the organizer of the press trip. We were able to chat a bit during the drive from the beautifully designed entrance up to the hotel itself. Had I not been traveling since before dawn, I would have just walked, but I was so exhausted, especially after talking so much about New York with Alvaro, that I was instantly grateful for that ride in one of the hotel's golf carts. 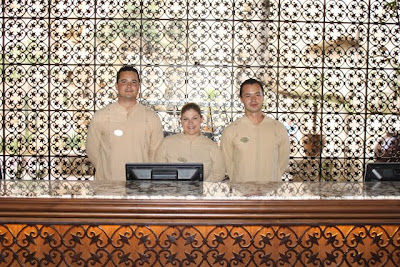 The staff at the front desk was equally as friendly. Even before the check-in process began, they offered me a complimentary margarita to welcome me to Los Cabos and to Grand Solmar. I eagerly accepted their offer and happily sipped on my drink as the clerk handed me my room keys and as the bellman led me to my suite. 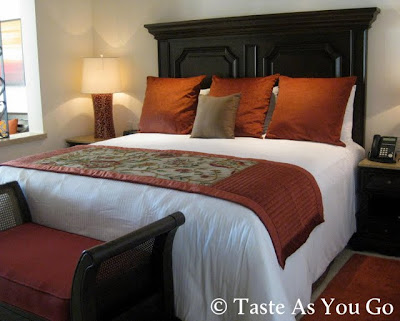 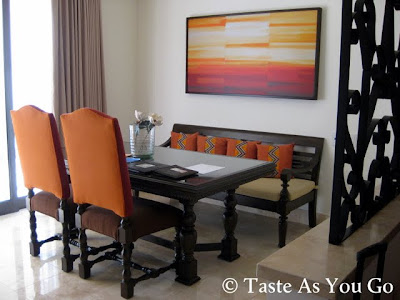 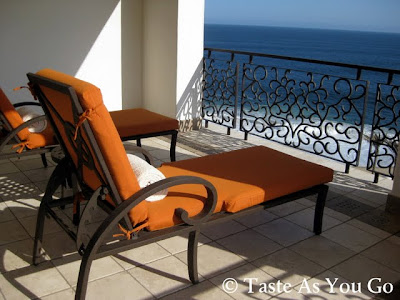 I had just enough time to take a few pictures of my suite at Grand Solmar before grabbing a quick shower and changing into a more presentable outfit before meeting the rest of the group downstairs for our tour of the grounds before the "Welcome Dinner" at La Roca Restaurant, one of two restaurants on-site. Each suite offers a full kitchen with marble counters and stainless steel appliances, in-villa dining and spa services, private balconies, flat-screen satellite televisions, a separate sitting area, an in-room safe, luxury bathrooms, and wireless and corded internet access. But I had to postpone the extensive exploration of my suite for later. 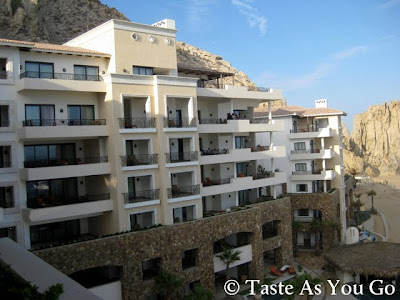 Grand Solmar is set along the private white sand beaches of Playa Solmar at the extreme southernmost tip of the Baja California peninsula, approximately 35 miles from the San Jose del Cabo (SJD) Airport. The resort was designed in such a way as to offer guests unobstructed views of the Pacific Ocean, as captured in this video I took on my last morning in Mexico.


I cannot begin to tell you how many times I've replayed this video since returning from Los Cabos. There's nothing more relaxing than the sound of the waves crashing onto the beach!

Go ahead and watch the video again. 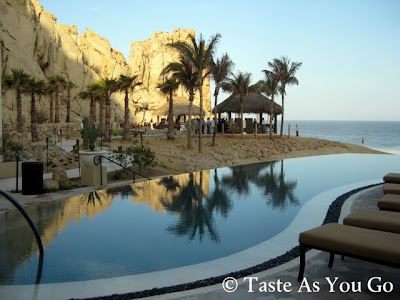 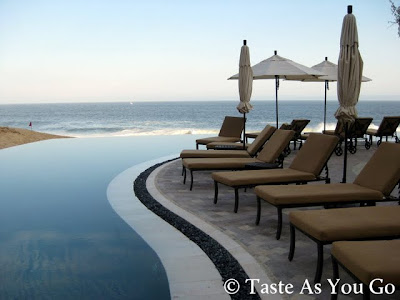 In addition to spectacular views of the ocean, Grand Solmar offers its guests the opportunity to take a dip and cool off in any of the three infinity pools at the resort, one of which is only open to adults (pictured above), an especially nice feature for those vacationing without children. 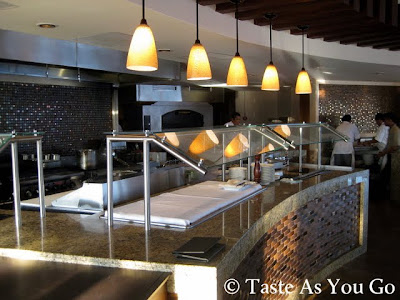 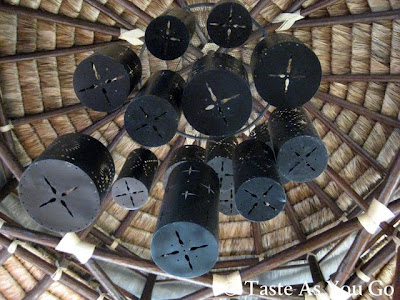 The last stop on our tour was La Roca Restaurant, where we settled in for our much-anticipated multi-course tasting dinner with wine pairing with the hotel's managing director, Ricardo Orozco. The restaurant, which showcased an open kitchen, featured the same old world Mexican decor found throughout the rest of the hotel, from the wood carved furnishings to the wrought-iron and stone finishes. And, an entire wall of the dining room was made out of glass so guests could take in the view of the ocean with their eyes while taking in the fusion of cuisines (authentic Baja, American, and Continental) with their mouths. 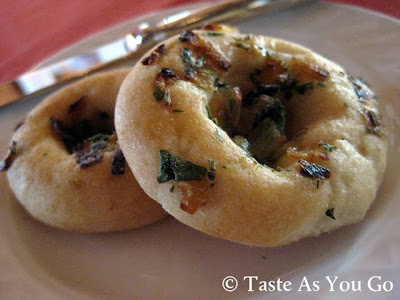 As we sat down to dinner, the sun had already begun to sink in the sky, so the photos I have from my first meal in Mexico are somewhat limited in number. I probably could have taken more if I had turned on the flash, but food blogger etiquette prevented me from doing so even though I was specifically there on a press trip.

To start, we were given our choice of freshly baked bread. I chose the Garlic & Herb Bread, which was shaped a bit like a doughnut, perfumed with the scent of cumin, and speckled with roasted garlic and fresh herbs. Those little pieces of heaven were so addictive that I had to have Rose remind me to limit myself to two or risk filling up too soon. 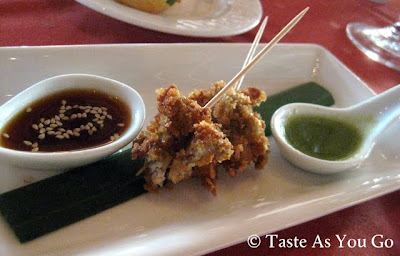 What came next was, easily, my favorite dish of the night. (I say this in retrospect, of course.) We were presented with Deep-Fried Oysters with two dipping sauces: a sesame sauce and a green chile sauce. Of the two sauces, I preferred the spicy heat of the green chile sauce over the tangy sweetness of the sesame sauce, and I appreciated that the oysters were battered just enough and that their meatiness wasn't lost in too much breading. 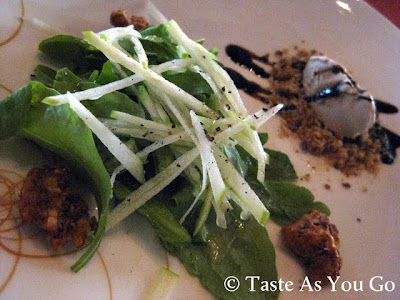 The salad that followed combined tradition with ingenuity. Lightly-dressed arugula leaves, topped with julienned Granny Smith apples and candied walnuts, were served with balsamic ice cream. I, for one, had never had balsamic ice cream before, so I was especially intrigued by its use as the accompaniment to a salad rather than as a stand-alone dessert. Naturally, the flavors on the plate married perfectly, and I found myself wanting another serving just so I could have some more of that ice cream.

What came next was photographed, but the quality of the photos was so poor that I decided not to include them in this post. A disappointing reality given that we also ate: Mussels Ensenada (a local specialty of Ensenada, Mexico the mussels are steamed in tequila flavored with garlic and chiles); Shrimp a la Taya, prepared with mayonnaise and dried peppers, and served with Cilantro Risotto (slightly undercooked) and an Avocado Salad; Roasted Sea Bass with tomatoes prepared in a multitude of ways (tomato puree, tomato confit, tomato jelly, and a tomato tortilla chip); and Spaghetti tossed with Fresh Seafood.

As a sort of pre-dessert, the chef brought out Avocado Ice Cream served over freshly-made Parmesan crackers with slices of mango. This dish seemed truly odd to me. While I loved the flavor and consistency of the ice cream, I thought the subtle sweetness juxtaposed too harshly with the pungent sharpness of the Parmesan cracker.

We closed the entire meal with a tasting trio of desserts: Prosecco Sorbet, a Dark Chocolate Tamale, and a Strawberry Compote with White Chocolate Mousse.

They had me at Prosecco sorbet. Seriously, they could have brought out buckets bowls of that stuff and I would have been perfectly content. 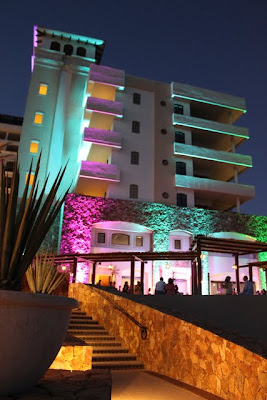 While it took some effort going back up to my room after consuming all of that food and drinking all of that wine (oh, the wine!) at La Roca, I did so laboriously, knowing that every bloated step was worth it. The satisfaction of collapsing into bed lay in my immediate future, and I was looking forward to falling asleep to the sound of the waves crashing outside and the anticipation of what was to come in the morning.