Cozy Up at Kome 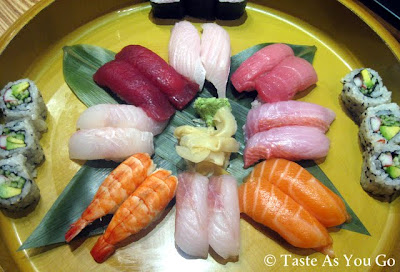 
When I was still living in New York, back when Stephen and I were still navigating ourselves through the ever-changing tides of our long-distance relationship, we found ourselves making toast after toast to the "End of Date Night". The strain of living in two different places was wearing on us, and we looked forward to the day when we'd be able to call the same place "home". Amusingly enough, one of the first things we did after I returned from Los Cabos and moved my things down to Pennsylvania was go out for a special dinner. 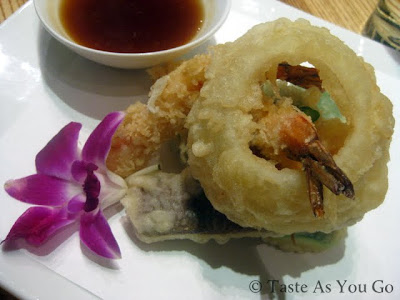 
I had my heart set on sushi, so we drove over to Kome in The Promenade Shops at Saucon Valley. We were immediately enveloped by the restaurant's romantic atmosphere, and as the hostess led us to our seats at the sushi bar, I instantly became enamored with the design. Despite its modern minimalist aesthetic, the restaurant felt cozy and comfortable. Illuminated by the warm glow of candlelight, it exuded an inexplicable hominess.

Naturally, we started with drinks -- sake for him and a lychee martini for me. As we sipped, we considered the items on the menu and watched the sushi chefs work their magic with rice, nori, and an assortment of skillfully sliced fresh fish. We split the Shrimp and Vegetable Tempura ($9) as our first course, which was served with the house tempura sauce. I was extremely pleased by the generous portion of food, especially given that the dish is served as an appetizer, and even more pleased by the texture: lightly battered on the outside and wonderfully tender on the inside.

Needless to say, we devoured it. 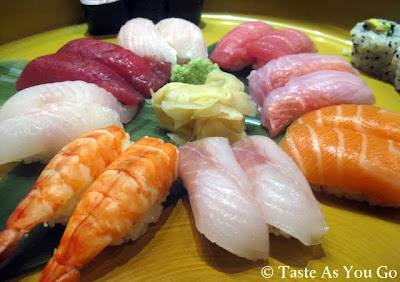 
Sharing food seemed to be working out well for us, so we split our main course, as well. Say "hello" to the Sushi Combination Plate.

Kome offers four sushi combination plates to accommodate varying sizes of dinner parties and varying degrees of hunger: 9 pieces/1 roll, 16 pieces/2 rolls, 24 pieces/3 rolls, or 32 pieces/4 rolls. Since it was just the two of us, we kept things in check and ordered the 16-piece plate, which included chu-toro (from the underbelly of the bluefin tuna). When the plate was placed in front of us, we grabbed our chopsticks and dove in with gusto.

In record time, we systematically worked our way around the circle of sushi until the plate was empty save the leaves that lay underneath the fish and the unused portion of the wasabi. What can I say? We really enjoyed it.