Before & After: Creating a Cookbook Corner 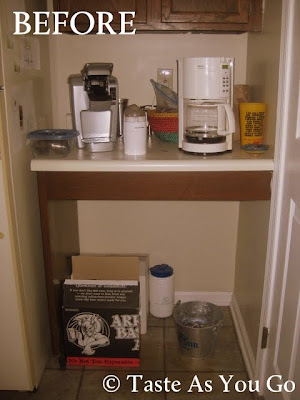 After we got engaged and I first moved to Pennsylvania to live with Stephen, one of my main concerns was transforming a space that was his into a space that was ours. As I unpacked my boxes, I began making a mental list of small projects that I could work on that wouldn't be too costly or time-consuming, the finished results of which would inject a little bit of me throughout the house. Naturally, my attention immediately focused in on the kitchen. 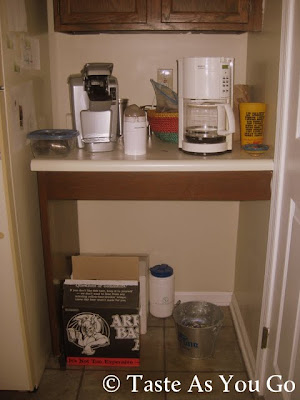 In one corner of the kitchen, between the refrigerator and the pantry, there is a small space affectionately referred to as our "Coffee Corner". That's where the caffeinated magic begins. Coffee maker, coffee grinder, coffee beans, Mini Keurig... They're all there, with the coffee mugs -- both traditional mugs and travel mugs -- safely stored in the cabinets above.

(Do you like how I didn't even bother to clean up the counter before taking these pictures?)

Yet, underneath this much beloved coffee station was... nothing. Underutilized space that housed cases of beer and a metal Corona bucket that holds our beer bottle caps. Given that Stephen and I are both in our thirties now and aren't in the habit of hosting keg parties on the weekend, I decided that it was time to put that space to better use.

That space was going to be the new home of my cookbook collection. 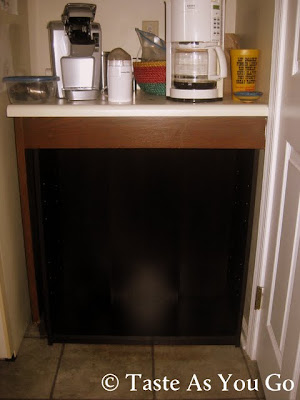 After measuring the opening and looking at shelving options at Lowe's, I purchased a bookcase that would allow me to adjust the positioning of the shelves (similar to this one). Since we're planning on making some more improvements to the kitchen in the future, I didn't stress about the wood of the bookcase not matching the wood of the counter. 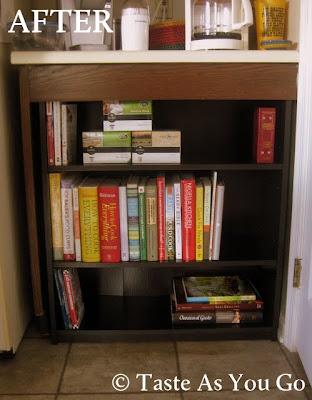 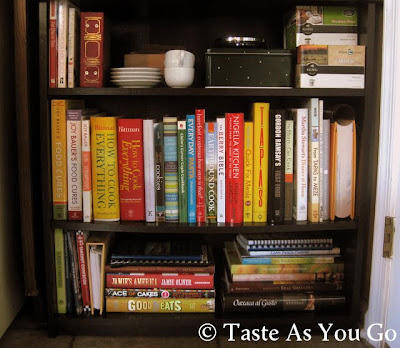 Here's a picture with all of my cookbooks loaded in. There was even room on the top shelf for me to store my espresso cups (the espresso machine lives on the floor of our pantry... for now...), a stock of K-Cups, my digital kitchen scale, and a metal tin of tea bags.


The space looks so much better and I love having easy access to my cookbooks and collection of family recipes (stored in small photo albums rather than a traditional recipe box). Before I put the bookcase there, I was afraid I'd have to store the cookbooks in the living room. This is much more convenient.

I have identified a potential problem, though... If/when I acquire more cookbooks, they're not going to fit here!

Alas, that's a problem for another day.

Do you have a small, but meaningful, kitchen improvement project that you're proud of?