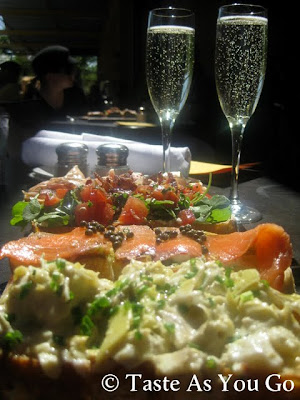 Bruschetta and Prosecco
at Postino Arcadia in Phoenix

My first trip to Phoenix involved a daunting physical challenge. Stephen and I road-tripped north to the Grand Canyon with our friend Rob so we could push our bodies to the limit and go against the advice of the U.S. National Parks Service. Despite warnings of serious illness and/or death from exhaustion, we were going to attempt to hike from the rim to the river and back in one day. 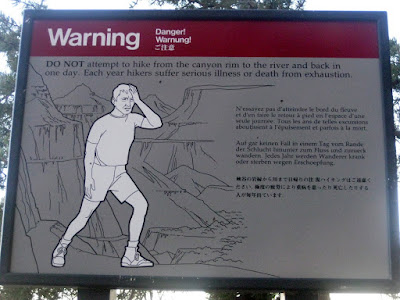 It took us nine hours, thirty-six minutes, and eighteen seconds to navigate our way down the South Kaibab Trail to the River Trail and then back up the Bright Angel Trail. Just over 9.5 hours to hike just over 16 miles. No one had fallen seriously ill, and no one had died. But we definitely lettered in Exhaustion that day! 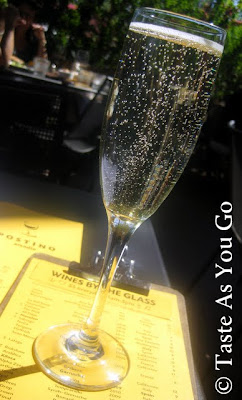 Glass of Prosecco
at Postino Arcadia in Phoenix


Although I would have loved to have visited the Grand Canyon again, I wanted to keep my agenda for my second trip out to Arizona on the lighter side and restricted myself to activities that were a little less strenuous. Like dining al fresco at Postino Arcadia, built from a converted post office, and bargain shopping the afternoon away. It felt great to having nothing pressing on my calendar and to slow down for a few days. 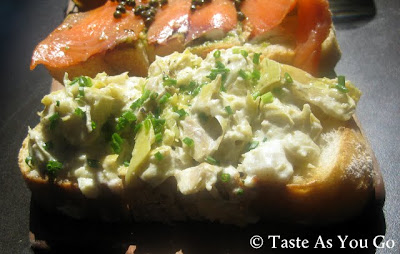 Bruschetta with Warm Artichoke Spread
at Postino Arcadia in Phoenix

To keep things light, Pere (Rob's wife) and I decided split an order of their legendary Bruschetta. For $13.50, you get your choice of four types of bruschetta listed on their menu. Varieties include everything from the traditional (Fresh Mozzarella with Tomato and Basil) to the play on the traditional (Tomato Jam and Fresh Sheep's Milk Cheese). Of course, being presented with so many options made it a little difficult for us to choose which four we wanted to try.

The bruschetta came out of the kitchen presented smartly on a long wooden paddle, with each type looking fresh and meticulously prepared. I took the logical approach and worked my way from one end of the paddle to the other, beginning with the Bruschetta with Warm Artichoke Spread. The flavors were perfectly balanced and each ingredient accented the others in a cohesive way. I loved how the creaminess of the spread played against the artichokes and the slight bite from the scallions. 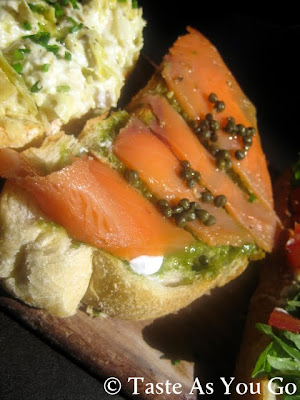 Bruschetta with Smoked Salmon and Pesto
at Postino Arcadia in Phoenix


Next in line was the Bruschetta with Smoked Salmon and Pesto. I approached this one with caution since I'm not typically a fan of smoked salmon. Or other smoked foods, for that matter. However, this dish surprised me. The saltiness of the pesto and the brininess of the capers cut the smokiness of the fish, and I actually enjoyed it. 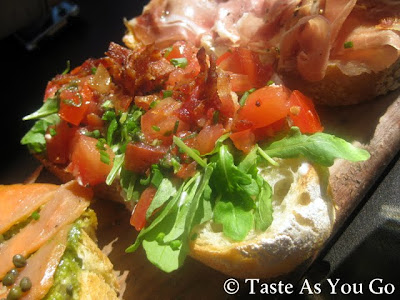 Bruschetta with Burrata, Bacon, Arugula, and Tomatoes
at Postino Arcadia in Phoenix 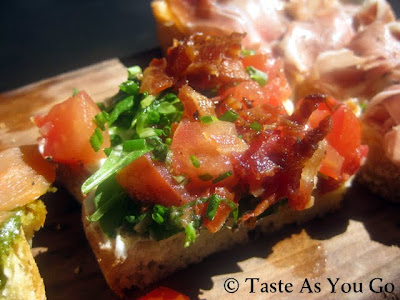 Bruschetta with Burrata, Bacon, Arugula, and Tomatoes
at Postino Arcadia in Phoenix


Up next? The Bruschetta with Burrata, Bacon, Arugula, and Tomatoes. I cannot begin to describe how delicious this was. If you've never had burrata before, then I implore you to try it as soon as possible!

Burrata is a fresh Italian cheese made from mozzarella and cream. The outer part of the cheese is solid mozzarella; however, the magic lies inside. That's where the mozzarella and cream live, creating a softer consistency and a rich, buttery flavor. Because of this, burrata is a perfect partner for the salty bacon, peppery arugula, and sweet tomatoes. I could have eaten plate after plate after plate of this, so I suppose it was a good thing that we had the portion that we had. 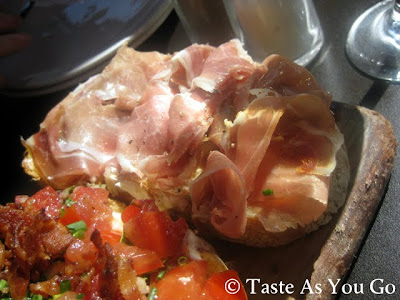 Bruschetta with Prosciutto, Figs, and Mascarpone
at Postino Arcadia in Phoenix 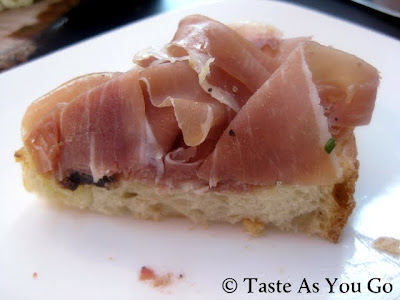 Bruschetta with Prosciutto, Figs, and Mascarpone
at Postino Arcadia in Phoenix

Last but not least was the Bruschetta with Prosciutto, Figs, and Mascarpone, another successful realization of the juxtaposition between salty and sweet. The creamy mascarpone provided a neutral base flavor against the rich decadence of the figs, and both were balanced by the saltiness of the prosciutto. Amazing and so, so simple! And... now that I think about it, I bet this dish could have been elevated to an even higher level with a little drizzle of balsamic reduction.

Thank you, Pere, for introducing me to such a lovely restaurant -- I'm definitely going to want to go back the next time I visit Phoenix so I can try the other kinds of bruschetta!