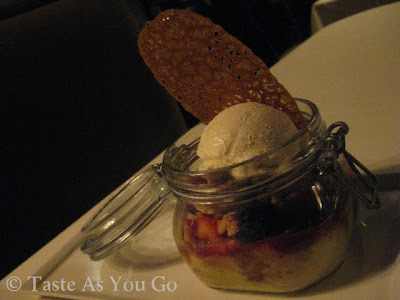 The mere idea of having dinner on a boat was enough to pique my interest. How could I not click through and find out more about booking a reservation at (or is it on?) the Moshulu? Described as "one of the world's grandest tall ships and fine dining restaurants in Philadelphia," I knew I had to get on board and sign up for their Groupon deal. But what started out as a belated Valentine's Day dinner turned into an unexpected three-hour tour of Moshulu's dinner menu. 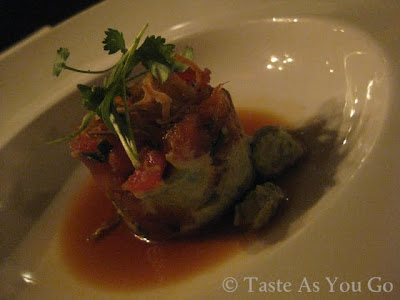 After Stephen and I arrived at the ship and had checked our coats, we were led to a richly decorated dining room that highlighted the dark wood and the efforts taken to restore the ship to its original beauty. Our booth offered us a view of the Delaware River, which was much preferred over a view of the dock or a table lacking a view at all. Just as I was leaning over to ask Stephen what we must have done to land a table like that, the General Manager appeared at our table and announced that they had been waiting for us and that the chef had something special in store.

"Because you mentioned how excited you were about dining here on Facebook."

"The chef would like to prepare an assortment of our most popular appetizers for you to try, and then we'll leave you the freedom to choose your entrees and desserts. How does that sound?"

Just like that, Stephen and I walked into a special tasting event, and we were eager to find out which appetizers the chef had chosen to share. The first dish to appear was the Hawaiian Ahi Tuna Tartare ($14, pictured above) and it was absolutely lovely. Presented in a molded tower, the sashimi yellow fin tuna was layered on top of avocado tossed with wasabi and then dressed with a citrus soy dressing that really brought all of the flavors together. The dish was garnished with crispy shallots, which provided a nice contrast in texture. Stephen and I really enjoyed this one and agreed that another plate wouldn't be a bad thing. 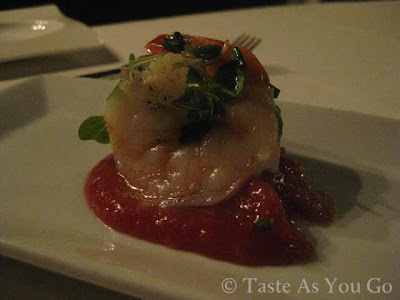 Next to come out were individual servings of Moshulu's signature Chilled Jumbo Shrimp with Horseradish Cocktail Sauce ($16). The shrimp were perfectly plump and I loved how the simple dressing of fresh lemon juice brought out the shrimp's natural sweetness. And the presentation of the shrimp on a dollop of cocktail sauce rather than hooked over the rim of a glass holding the sauce was refreshingly elegant. So far, so good! 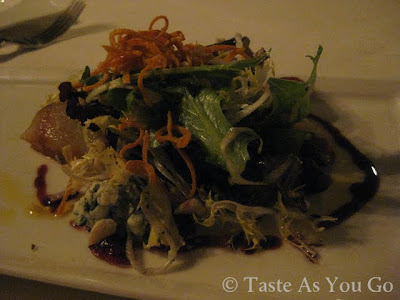 To give us a taste of their seasonal salads, the chef plated two versions of their Blue Moon Acres Organic Salad. Organic greens are delicately tossed with Danish blue cheese, roasted hazelnuts, poached Anjou pears, and sun-dried cranberries. The whole salad is finished with a drizzle of cider maple vinaigrette. Due to my cranberry allergy, my salad didn't have them in it. Though, Stephen was able to tell me that the cranberries' intensified tartness really helped to balance the slight bite from the blue cheese and the sweetness from the poached pears. All in all, a delightful salad that helped lay a light base for what was to come next. 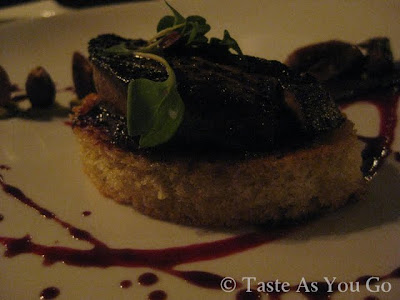 What came next was one of the most innovative things I've ever eaten -- Foie Gras PB&J ($17). Yes, you read that correctly.

Not only was the dish beautifully plated, all of the components were ingeniously crafted into one cohesive culinary thought. Executive Chef Anthony Bonett seared Hudson Valley foie gras so that the outside was deliciously caramelized while the inside was silky and rich on the tongue. The foie gras was placed atop a piece of griddled brioche that was cut to match the shape of the foie gras. And, serving as accompaniments to the foie gras were crunchy whole pistachios, sweet cherries, ginger-roasted plums, and a port wine, foie gras jus. A completely elevated take on PB&J that had Stephen and I dueling for the final bite. So, so good.

I'm just dying that the light was so low in the restaurant (great for ambiance, horrible for photos) because this picture just doesn't do the dish justice. 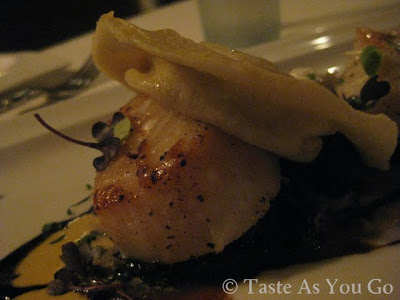 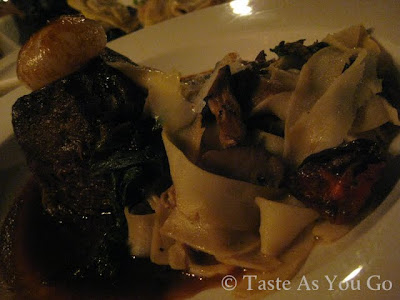 Stephen and I enjoyed our appetizers so immensely that we had high hopes for our entrees. Unfortunately, they didn't live up to our expectations and fell disappointingly short of the dishes we started with. Stephen ordered the Barnegat Light Diver Scallops ($32), served with butternut squash and potato tortolloni, spinach, and prosciutto and topped with both a balsamic reduction and a goat cheese saffron cream. Earlier dishes demonstrated the chef's ability to harmoniously play flavors off one another, but, in this dish, the flavors fought with each other for top billing. Plus, I found the pasta dough for the tortolloni too thick and under-cooked.

My Slow-Braised Short Rib ($32) looked fabulous on the plate. Served alongside pappardelle pasta, cippolini onions, maitake mushrooms, and oven-dried tomatoes topped with shaved parmesan and spiced beef jus, the dish smelled absolutely divine. But my senses were tricked, and the dish didn't taste as appetizing as I thought it would. The short rib was tough and dry in spots and, again, the pasta was under-cooked. A real shame. 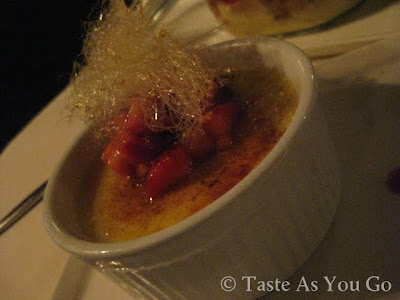 Thankfully, with dessert came redemption for the kitchen. Stephen and I didn't exactly have room for it, but we couldn't pass up the opportunity. Stephen ordered the Berry Berry Sundae ($10), which consisted of a warm croissant pudding, berry fudge, and an almond crumble topped with vanilla ice cream. This dessert was right up Stephen's alley, and we both got a kick out of its presentation in a small jam jar. Definite points for creativity.

My dessert wasn't listed on the regular dessert menu. The Strawberry Creme Brulee was conceived by Executive Pastry Chef Sandra Valentine and Pastry Chef Giovanni Sosa and featured a classic vanilla creme brulee topped with fresh strawberries and spun sugar and served with two heart-shaped chocolate shortbread cookies. I loved every bite and didn't even share.

(Sorry, Stephen, but, sometimes, a girl just has to keep the dessert all for herself.)

While our maiden voyage on the Moshulu did have its ups and downs, Stephen and I enjoyed our night out in Philadelphia, and we're grateful to the management for treating us to our flight of appetizers. Thanks for contributing to such a special night!