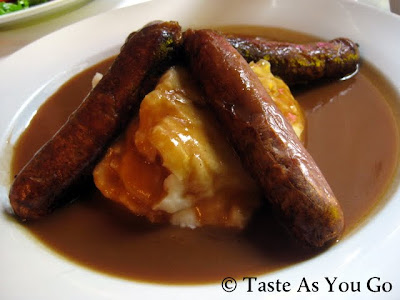 Bangers and Mash at St. Andrews in New York

One of the things I miss most about being based in New York is having the freedom to meet up with friends for dinner or drinks after work. Now that I live and breathe by a bus schedule, I'm typically rushing off to Port Authority after shutting down my computer at the end of the work day. My social life has suffered a major blow. 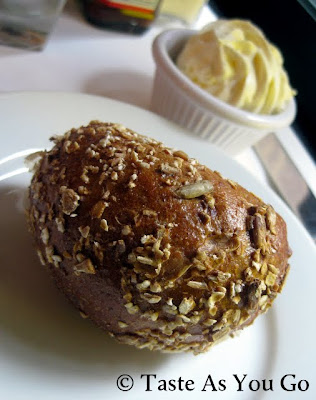 Multigrain Roll and Butter at St. Andrews in New York

Thankfully, I have a posse of unbelievably understanding friends who are all willing to accommodate my commute whenever we schedule a get-together. Oftentimes, this means foregoing dinner altogether and squeezing in a lunch in the middle of a hectic workday. Which is exactly what my friend Kym and I did a few months ago (yes, this is post is really late) when we met for lunch at St. Andrews Restaurant & Bar in Midtown.

Kym's commute is as crazy as mine is, so the lunch came as a blessing, a much-needed break from the usual. The hostess seated us at a table by the window on the quieter second level of the restaurant, and, from there, we could silently observe the pedestrian activity down below on 46th Street.

People-watching over a meal? You know that's one of my favorite pastimes! 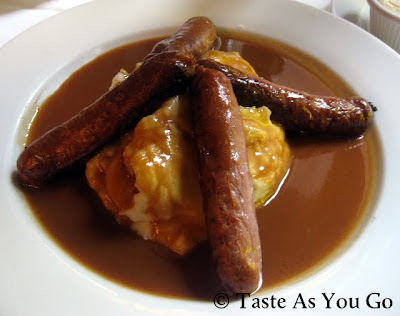 Bangers and Mash at St. Andrews in New York

The lunch menu at St. Andrews was short but, surprisingly, diverse, offering everything from salads to sandwiches, pasta to seafood, and raw bar to traditional Scottish fare. Given the pub atmosphere, I limited myself to making a selection from those options. It was tight race between the Bellhaven Battered Fish and Chips and the Bangers and Mash, but, ultimately, the Bangers and Mash ($13) won. Partly because it's so damn fun to order.

Knowing that "bangers" was British slang for "sausages," it wasn't difficult to determine what the main components of the dish were -- sausages and mashed potatoes. But I couldn't help but wonder about the origin of the word. According to Wikipedia, which references The Oxford English Dictionary:

Although it is sometimes stated that the term "bangers" has its origins in World War II, the term was actually in use at least as far back as 1919. The term "bangers" is attributed to the fact that sausages, particularly the kind made during [the war] under rationing, were made with water[,] so they were more likely to explode under high heat if not cooked carefully[.]

Hmm... Interesting! Though, acquiring that little nugget of information has caused my brain to wonder ten more things. Oh, the power of learning!

As to my thoughts about the Bangers and Mash at St. Andrews... The lunch portion was overwhelming. I would have been satisfied with two sausages and thought four bordered on excessive. Had the sausages not been overcooked and on the dry side, I would have been happy with the idea of taking the uneaten portion as leftovers. To be polite, I had our server wrap what I didn't eat in a take-out container but wound up tossing the container on the walk back to my office because I didn't want to deal with figuring out a way to reheat the food without drying out the sausages even further.

The mashed potatoes, which were covered and surrounded by a pool of gravy, were just average.

And that's really all I have to say about that...

Despite my reaction to the food, I wouldn't rule out a return trip to St. Andrews since it's so close to my office. I may, however, decide to skip the Bangers and Mash next time in favor of something else.