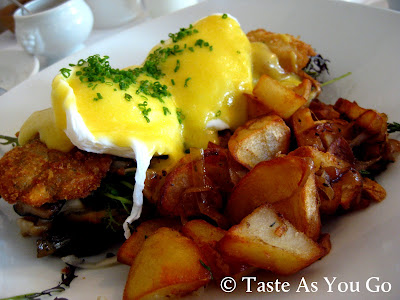 A quick glance at my Food Events Calendar revealed that yesterday was National Eggs Benedict Day. While I don't have an Eggs Benedict recipe to share, I am going to tell you where you can find an unbelievably exquisite version of this traditional breakfast dish, sinful with all of its rich, savory layers.

Sorry, New Yorkers... you're going to have to leave the city and head for the Lehigh Valley to indulge in this one. 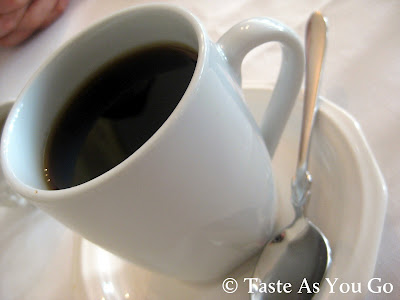 Coffee at Bolete Restaurant and Inn
in Bethlehem, PA 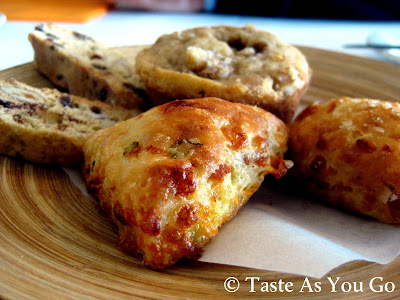 Despite many discussions about treating ourselves to Sunday brunch at Bolete Restaurant and Inn,   a full six months passed after I moved down to Pennsylvania before Stephen and I transformed discussion into reality. Located at the former site of the Inn of the Falcon, a restaurant owned by our dear friends Al and Shirlee Neumeyer, Bolete immediately felt familiar. Fond memories of special dinners and casual afternoon drinks came flooding back, and, all of a sudden, Stephen and I were transported back in time to our college years and the early days of our relationship. 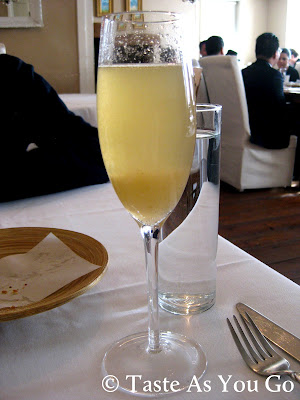 Pear Bellini at Bolete Restaurant
and Inn in Bethlehem, PA 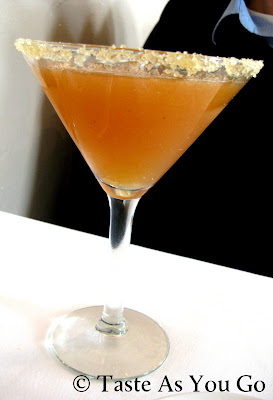 Bolete Greyhound at Bolete Restaurant
and Inn in Bethlehem, PA

And what better way to celebrate coming home than with brunch cocktails?

I opted for a classically elegant Pear Bellini ($11), while Stephen chose one of the signature drinks. His Bolete Greyhound ($13) packed a powerful punch. Consisting of Ketel One vodka, roasted grapefruit juice, and brown sugar simple syrup, Stephen's cocktail was beautifully presented in a martini glass with a sugared rim.

Roasting the grapefruit before juicing really made a difference in the flavor of the drink and brought out the sweeter side of the fruit. It was dangerously good, and after just one sip, it was decided that one brunch cocktail was all that Stephen needed.

But let's get serious. I lured you into reading this blog post with a promise to talk about Eggs Benedict.

Now is the time.

If When you dine at Bolete, you'll more than likely see multiple versions of Eggs Benedict on their seasonal brunch menu. Take about ten seconds to engage in the inevitable internal debate that will commence in your head after you read the descriptions of each version and then put the menu down. Order the Eggs Chizmar ($14).

I repeat: Order the Eggs Chizmar.

Named after owner Chef Lee Chizmar, this dish is more show-stopper than artery-clogger. Gone is the anticipated English muffin base. In it's place? Two house-made buttermilk biscuits. Next comes a layer of  mild and peppery mizuna, followed by a layer of mushrooms and bacon.

If that's not enough to get you to order it, then keep reading. 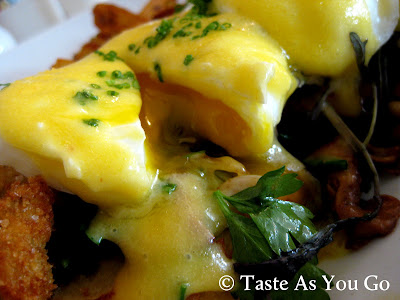 Because this is where it gets interesting.

On top of all of that goodness, Chef Chizmar places fried oysters (!), two perfectly poached eggs (provided by nearby Happy Farm in Kintnersville), Hollandaise, and a gentle sprinkling of fresh chives as garnish. And don't forget the golden, crispy potatoes that are piled on the plate next to that masterpiece.

A few bites into my meal, I declared that Bolete's Eggs Chizmar was a "last meal" contender. A few bites later, I pushed the dish into the Top Three.

Coming from someone who never rushes to order Eggs Benedict off the menu, that a Big Deal.