Skip to main content
Labels
Posted by Michelle Rittler // Taste As You Go May 19, 2012 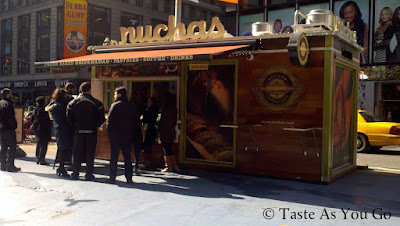 It's funny how things change. A year ago, when I was still living in New York, I would go out of my way to avoid Times Square. These days, cutting through Times Square on my way to and from the office is part of my regular workday routine. But because I'm so focused on walking as quickly as possible, I rarely take the time to slow down to take in what's happening around me.

Unless, of course, there's just no way to avoid it. 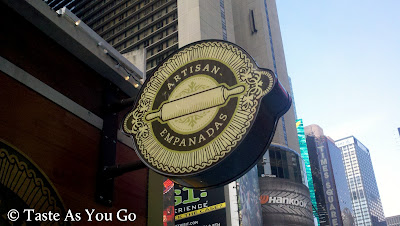 Back in November 2011, Nuchas opened in the middle of the Broadway Pedestrian Plaza, offering the public traditional Latin American empanadas that are baked right there on site and giving new meaning to the idea of "fast food". Patrons line up at the window and place their orders for empanadas -- meat, vegetarian, or sweet -- and then either grab a table in the plaza or continue on their way to eat their treats on-the-go or at their final destination.

My original plan involved waiting until Nuchas had been open for several months before going to visit. I wanted to let the novelty of its presence die down a bit and to let the weather warm up before I devoted an extended period of time to waiting on line outside for food. But with the unusually warm winter we had, I was convinced to go sooner than anticipated. 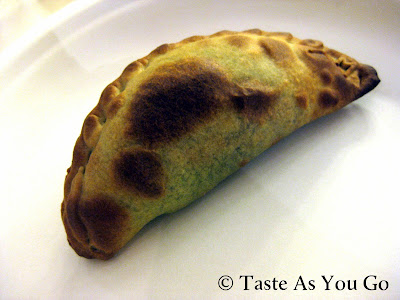 Portobello Empanada from Nuchas in Times Square in New York 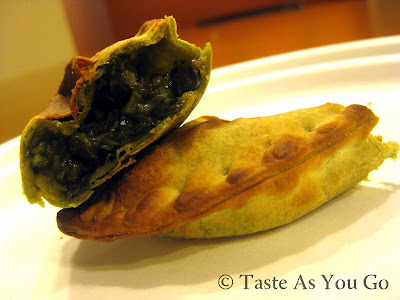 Portobello Empanada from Nuchas in Times Square in New York

To get as complete an experience as possible, I ordered one of the Nuchas lunch specials -- three empanadas plus a bottle of water for $10. And when I opened the bag, I could tell just by looking at the empanadas that they were pretty special.

On one corner of each empanada was a letter that indicated which filling was inside. Brilliant. No confusion here! I knew that the empanada with the "M" on it was the Portobello Empanada filled with portobello mushrooms (obviously), spinach, onion, mozzarella and fresh herbs. To drive home the fact that this was a vegetarian empanada, the filling was housed in a spinach dough.

The empanada was plump with filling and lacked that heaviness you get with fried empanadas. Unfortunately, this wasn't my favorite of the three. While I was a fan of all of the ingredients in the filling, I didn't enjoy the texture. The spinach had been cooked to the point of sliminess and I found myself wishing there had been a little bit of crunch somewhere for contrast. 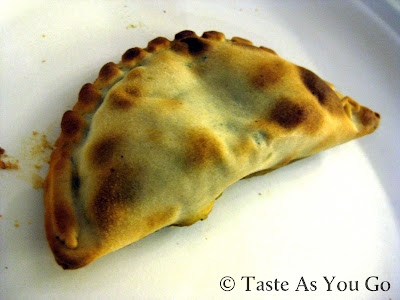 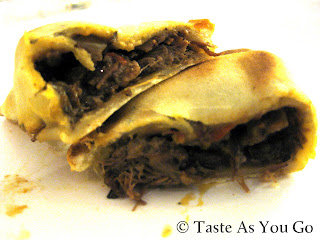 I just wish I had taken better pictures... I won't know what the hell happened to my camera... Oops. 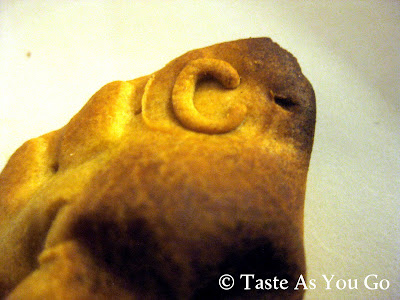 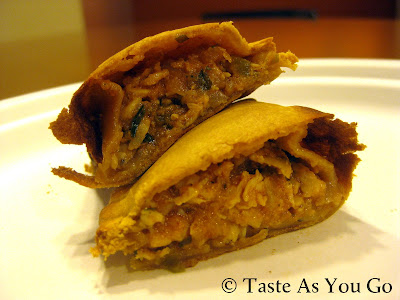 Third up? The Spicy Chicken Empanada seasoned with chipotle, tomatoes, onions, peppers, and fresh basil with a paprika dough. So inventive! Too bad it wasn't as spicy as I would have liked. I enjoyed the smokiness from the chipotle, but I couldn't detect any heat and felt a little disappointed in my meal by the time I was finished.

However, I will say that the folks at Nuchas were extremely friendly when I ordered my food, and they didn't skimp on the filling.