Skip to main content
Labels
Posted by Michelle May 25, 2012 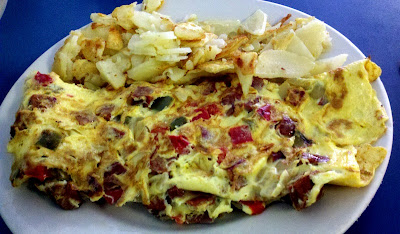 I'm failing to remember how Stephen and I ended up at Puffins Cafe in the first place. It might have been because our usual brunch spots were closed. Or, maybe, because the wait for seating at those places was too long. Perhaps it was because we were jonesing for something different. All I know is something propelled us to pull into the parking lot and walk inside to request a table for two.


The interior of the restaurant was simple -- tables, chairs, and a handful of booths -- with very little in the way of decoration or accent pieces. And although the staff was friendly and seated us promptly, Puffins Cafe didn't look or feel like a place where I'd want to linger over several cups of coffee, a hearty meal, and the Sunday New York Times. It lacked that cozy ambiance that I long for on the weekends.

Surprisingly, though, the menu was extensive, and I had a difficult time deciding what to order. My eyes scanned the options again and again, but they weren't focusing on anything. There were, dare I say, just too many options! I finally decided on the Chorizo Omelette since chorizo isn't an ingredient that factors regularly into my weekend brunches in the Lehigh Valley.

Chunks of smoky, spicy chorizo, diced bell peppers, onions, tomatoes, and cheese -- how could I not enjoy it? When paired with the side of potatoes, my omelette made quite a substantial meal, and I found myself stuffed after only managing to eat about half of the food on the plate. From what I can remember, Stephen ordered the blueberry pancakes... But had zero difficulty clearing his plate!

Now, it seems like such a trivial thing, but I really wish the owners had put more time and thought into the design of the interior of Puffins Cafe because the lack of that homey feeling really detracts from the restaurant's potential. While the food was decent, both in taste and in price, and the departure from our norm was nice, I'm just not sure the cafe has what it takes to land a place on our rotation of weekend brunch spots.