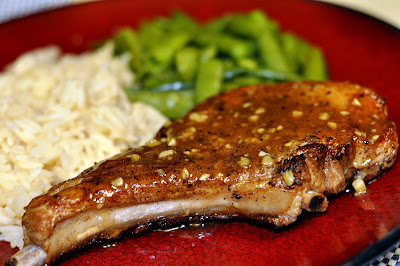 
I was provided with product samples at no cost to me. I did not accept monetary compensation for writing about these products or about my experiences while using them. All opinions expressed are my own.

After I moved in with Stephen last summer, I changed the way I cooked. I no longer cooked to feed a party of one or to suit my tastes alone. Even though the majority of the household food decisions fell to me -- grocery shopping, menu planning, etc. -- I wanted to be as fair as possible when it came to choosing what we ate. That meant occasionally preparing something that I wouldn't have given a second thought to when I was living by myself. 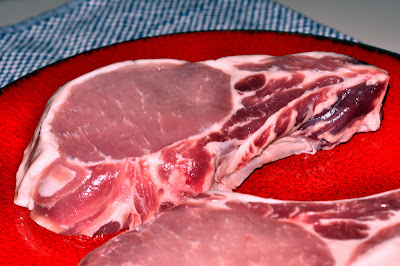 Growing up, I never like pork chops. My mother always managed to cremate them in the oven until they had shrunk to half their size and turned this unappetizing shade of gray. Cutting through one of them required an extremely sharp knife, elbow grease, and about ten minutes of sawing per bite. We used to eat the chops covered with gallons of ketchup or barbecue sauce just to have a fighting chance.

My memories of those experiences were enough to keep me from ever cooking pork chops in my own kitchen, but Stephen loves them, so I've been making solid attempts to integrate pork chops into our diet.

I love him that much. 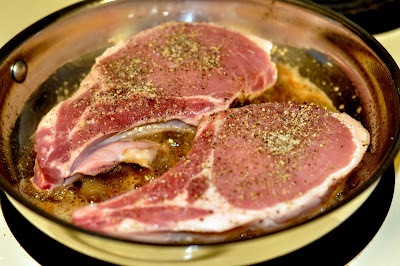 Luck was on his side the night I told him that I was making dinner out of some goodies that had arrived in a package from Suzy Sirloin -- two nice, thick Berkshire Pork Chops. These chops were made from "the finest breed of hogs" and promised to be free of steroids and hormones. Given the high quality of the meat, I found myself even more determined to create a meal that would a) change my mind about pork chops and b) prove to my fiance that I could cook them properly. 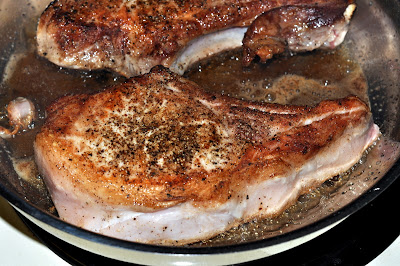 To prepare the pork chops, I seasoned them with salt and pepper and then seared them on high heat to give the meat great color and flavor. By searing the meat on such a high temperature, the juices remained right where they belonged -- inside the chops.

Now, my mother never served a sauce with her pork chops. To avoid watching Stephen cover my pork chops with ketchup, I created a simple pan sauce from the pan drippings, garlic, orange juice, and stock. 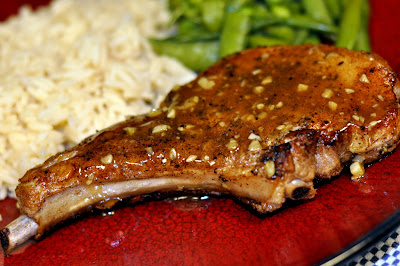 It didn't take any time at all for the two of us to clean our plates. The chops were moist and tender, and the combination of orange and garlic in the sauce was absolutely heavenly. I served them with jasmine rice (cooked in chicken brother rather than water -- our favorite way!) and steamed sugar snap peas. Seriously, delicious, you guys.