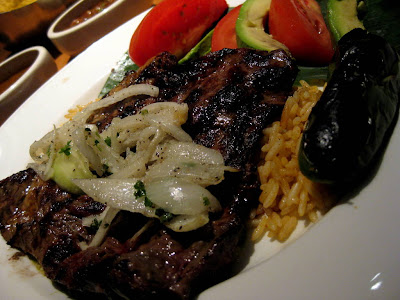 When I travel to a city I've never visited before, I try to focus on eating at restaurants that offer food I can't get anywhere else. Especially if that city is known for a particular type of cuisine. But, sometimes, despite my best efforts to stay within that frame of mind, a recommendation from someone who knows better steers me right to the front door of a chain restaurant. 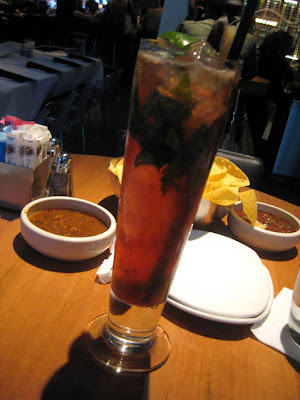 In this case, the restaurant was Cantina Laredo in the Near North Side neighborhood of Chicago. When I researched the restaurant, I discovered that there are locations in fifteen different states and three different countries, including a location in the Philadelphia airport.

I was willing to sip on a Strawberry Mojito ($10.25) as I perused the dinner menu and tried to figure it out. 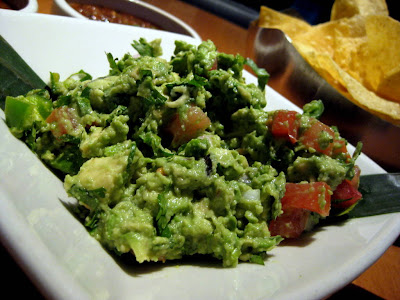 Well, wouldn't you know it? The very first item on the menu caught my eye -- Top Shelf Guacamole ($9.99) made fresh at the table. Although I was dining alone, I ignored the line on the menu that stated that one order of guacamole would serve two to four people. I just had to have it.

The best part about having the guacamole made right in front of you? Being able to taste a little bit in order to adjust the seasonings. After the first taste, it needed more salt. After the second taste, I wanted it to have a little more heat. After the third taste, it was just right.

I ate all of it. And I'm not even a little bit ashamed. 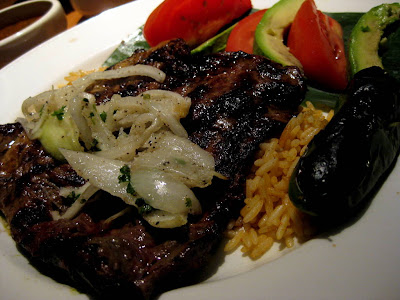 For my main course, I went all out and ordered the Carne Asada ($18.99) with marinated onions and chimichurri sauce. The steak also came with rice and wedges of tomato and avocado. Thank goodness for those extra sides! I needed something to rescue the fire that flamed in my mouth after the first bite of steak.

The flavor of the meat was completely obliterated by the amount of black pepper that was used to season the onions. Unfortunately, not a single corner of the steak was spared and I couldn't get away from it. I was kicking myself for inhaling all of the guacamole at the beginning of the meal. I would have loved to have chased the steak with it to help stop my taste buds from burning.

It was disappointing to discover that the Carne Asada at Cantina Laredo wasn't as skillfully or thoughtfully prepared as their Top Shelf Guacamole and even more disappointing to end my meal on such a mediocre note. To be fair, though, Carne Asada is not one of their signature dishes (indicated by a red dot on the menu). Perhaps mediocrity was perfectly acceptable.