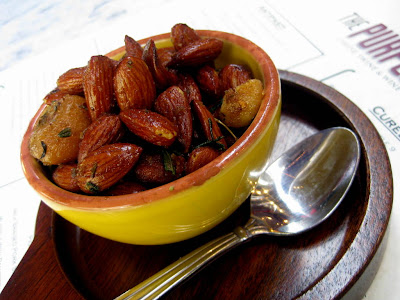 I can hear Esi of Dishing Up Delights laughing at me right now as I write this. She and I had the opportunity to meet in real life (!) over dinner at The Purple Pig when I was in Chicago for work back in April. I tried to convince her over several glasses of wine that I'd be timely in writing my review, but, um, well...

That obviously didn't happen. I'm only finally getting around to writing about our meal, over two months after Esi wrote about it. Oops.


Because the idea of them sounded so intriguing, we started with the Pork Fried Almonds with Rosemary and Garlic. Savory, addictive, and not completely overwhelmed by rosemary, I could have eaten these almonds by the ton. The whole cloves of roasted garlic were a nice touch, offering a slight sweetness to the dish. 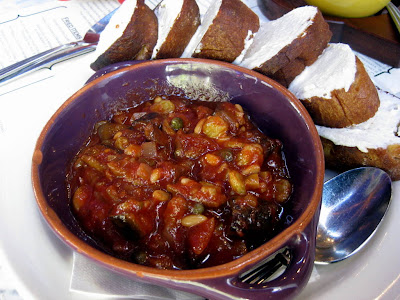 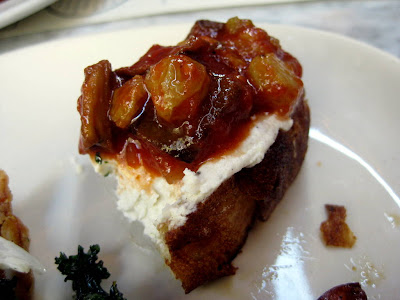 A recommendation from Twitter led us to the Eggplant Caponata with Goat Cheese ($11), an offering from the "Smears" section of the menu. The caponata, presented in a large crock, provided the perfect sweet and sour accompaniment to the tangy goat cheese, which was generously spread on thick slices of bread. 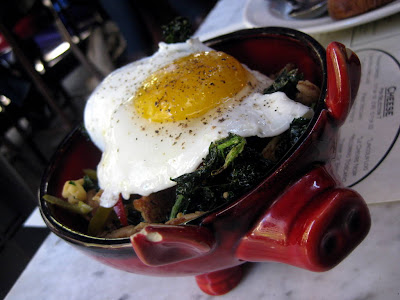 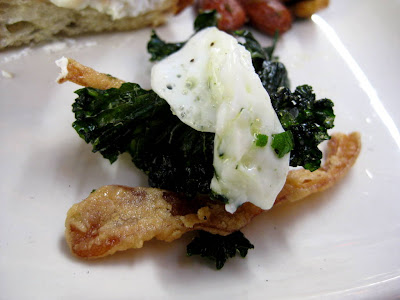 I let Esi choose the next dish, and she chose a winner -- the Pig's Ear with Crispy Kale, Pickled Cherry Peppers, and Fried Egg ($8). Since I was a newbie when it came to eating pig ears, I didn't rush to pop a bite into my mouth when the dish arrived at our table. I distracted myself by commenting on the adorable cuteness of the piggie bowl... But after a silent pep talk, I grabbed my fork and dug in.

As a person who truly appreciates contrasting textures in a dish, I really enjoyed this one. The pig's ear was thinly sliced and, after frying, possessed a pleasant crunch to it, while the crispiness of the kale almost allowed it to melt away on my tongue. All of this was balanced by the smooth creaminess of the egg yolk, something I'm surprised Esi and I didn't fight over! 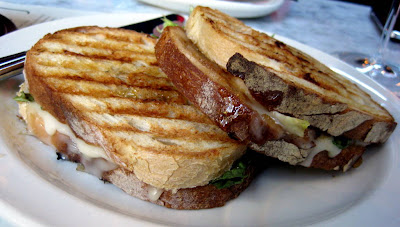 At this point, we needed something a little more substantial in the food department. Up next? The Taleggio, Fig and Onion Marmalade, and Escarole Heart Panini ($10). After sharing small plates all night, the amount of food that arrived was surprising. Plenty to feed both of us and the people sitting at the next table!

As far as grilled cheese sandwiches go, this one was killer. No shortage of gooey cheese and bread grilled on both sides to a crispy golden brown. I loved out the sweetness of the fig and onion marmalade brought out the fruity tanginess of the mild Taleggio. Great choice! 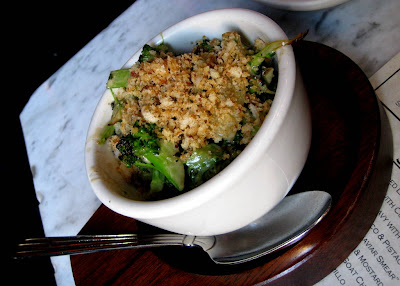 But... then, after all that cheese, we decided we needed some more vegetables and ordered the Broccoli with Roasted Garlic and Anchovy Vinaigrette ($7). The vinaigrette gave the broccoli a creamy texture, which was offset by the crunchy breadcrumb topping. Not quite a palate-cleanser but delicious nonetheless. 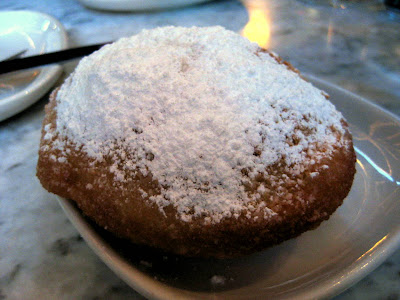 Esi and I had happily eaten our way through the evening and it finally came down to Decision Time: dessert or no dessert? Since there's a picture of something covered with powdered sugar in this post, we obviously ordered dessert. When a restaurant fills brioche with ricotta and chocolate chips and then fries it, then you are morally obligated to at least try it.