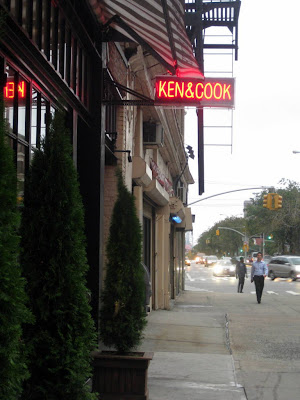 A portion of the cost of this meal was paid for by the establishment. I did not accept monetary compensation for writing about this meal or about my experiences while at the restaurant. All opinions expressed are my own.

The raindrops started to fall as I plodded up the stairs of the Grand Street subway station. Nothing worthy of an umbrella but just enough to be a nuisance. Of course, in typical Michelle-fashion, I got distracted by the rain and got turned around trying to navigate my way from the subway to Ken & Cook, where I was due to meet my friend Kym for dinner. 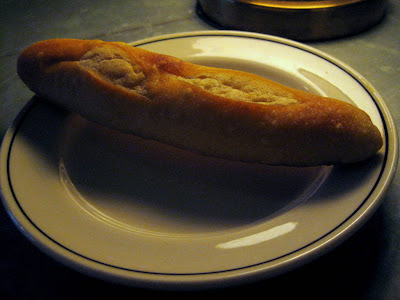 After I made it to the restaurant, I joined Kym on the bench just outside the door. We were slightly early for our reservation and had to wait until the staff wrapped up its pre-service meeting before entering. Being blocked at the door came off as a little odd, but any awkwardness that resulted from the situation quickly dissipated after we were lead inside. Warm and welcoming, the decor showcased a mixture of textures -- brick walls, pressed tin ceiling, wooden chairs, and banquettes upholstered in vintage leather. This felt like the place to be on a rainy New York evening. 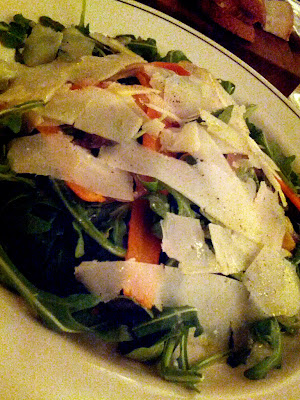 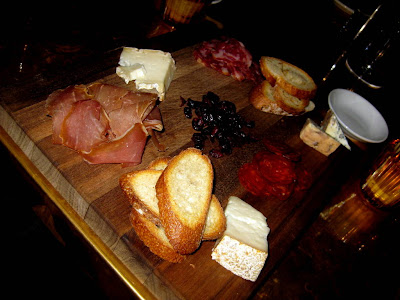 We weren't the only ones who felt that way. As Kym and I worked on our first courses, groups of people continued to trickle in until the restaurant was packed with bodies, even as the drizzle of rain transformed into a full-on downpour.

[Before I continue, I must say that the majority of the photos featured in this review were taken with my phone. My point-and-shoot camera was acting up and the photos tried to take without the flash turned out horribly. This was the best that I could do under the circumstances.]

I started with the Arugula Salad ($13) with carrots, Pecorino, and thinly sliced red onions. Dressed in a simple vinaigrette, the salad was large, most definitely enough for two people to share. In addition to the salad, we split the Mixed Board ($26) consisting of the chef's selection of three items from the charcuterie menu and three items from the cheese menu. This turned out to be a pretty good deal when you take into consideration that individual items on each of those menus are $5 each. 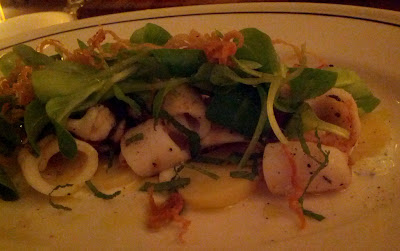 Although we hadn't ordered it, the chef sent out a serving of the Squid Salad ($15) with his compliments. Honestly, the best squid dish I've ever had. The squid was grilled perfectly, tender with great flavor. The coolness of the yogurt and mint and the heat of the chili peppers played well with the meatiness of the squid, and the sliced fingerling potatoes added an earthiness to the dish that brought everything together.

This is a must-order. 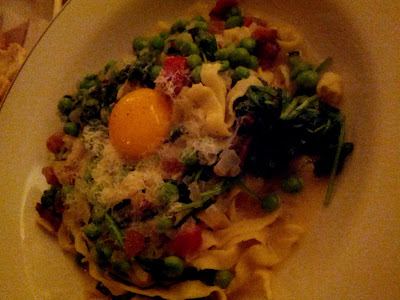 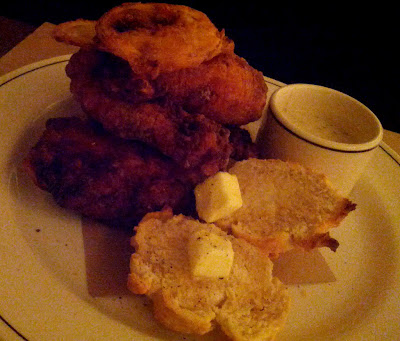 Unfortunately, I wasn't as enthused about my pasta. I chose the Fettucine ($19), which was served with guanciale, peas, and an egg. After the plate was placed in front of me, I was instructed to stir the egg yolk so that it created a creamy sauce for the pasta. As much fun as that was, the pasta was overcooked and was too mushy to be enjoyable. A real shame since the I liked the combination of flavors of the other ingredients.

Kym went with the Fried Chicken ($19) served with biscuits and honey. The portion was extremely generous, as four pieces of chicken were arranged on the plate -- two that were bone-in and two that were boneless. Naturally, the bone-in pieces were juicer than the boneless pieces. We agreed that the fried chicken was pretty good, though I would have sprinkled a more salt on the meat after removing it from the oil. It lacked finishing and that last bit of salt would have made all the difference.

It pained our host, co-owner Artan Gjoni, to hear that we were skipping dessert (a rarity for us), but if we were going to make the train (Kym) and the bus (me), then we had no choice but to end the evening early. If I ever make it back to Ken & Cook, then dessert will definitely be on the agenda, as well as another helping of that squid salad.

Though, perhaps, not in that order.