Taste of Aruba: An Evening of Aruban Artistry, Culture, and Cuisine 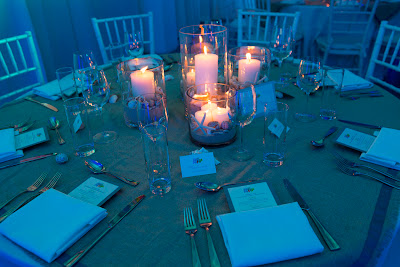 A couple of weeks ago, I was invited to attend a press dinner at The Kitchen NYC hosted by the Aruba Tourism Authority. The event was billed as a "Taste of Aruba" and offered guests the opportunity to experience "an evening of Aruba artistry, culture, and cuisine". Since I had such a fun time at the press event put on by the Mexico Tourism Board last year, I eagerly accepted the invitation to get to know Aruba a little bit better. 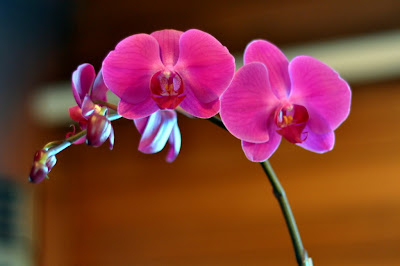 When I walked down the stairs and into the basement studio, it felt as if I were transported out of the cold and slightly snowy reality of Manhattan and nestled into the welcoming warmth of Aruba. Vibrant blues and greens brightened up the underground event space, emphasizing Aruba's designation as "One Happy Island". And I couldn't help but smile when I spotted the elegant orchid centerpieces in the bar area. 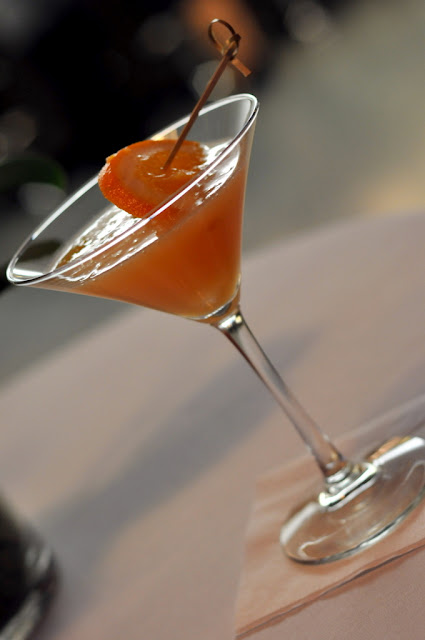 You know what else made me smile? Being handed an Aruba Ariba. The cocktail of the evening evoked the color of a sunset and packed quite a punch with its powerful combination of vodka, rum, and variety of liqueurs and juices. After just a few sips, my skin started to tingle.

At first I thought I might have been sipping took quickly, but it wasn't until later, when I was reading through the ingredients of the drink, that I realized I was probably having a mild allergic reaction to the cranberry juice that was in it. The bartender listed the ingredients before handing the drink to me, but "cranberry juice" was definitely never mentioned. 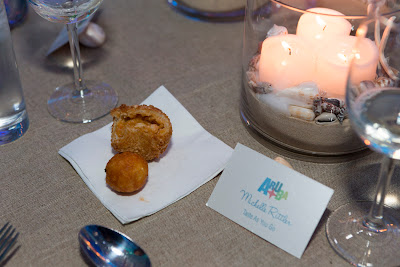 Another disconcerting issue with the cocktail hour? The servers being unsure of what they were actually serving. After taking a bite of what I was told was a Fried Gouda Ball, I spent a few minutes confusedly trying to figure out what I had really been served. Turns out I had actually been given a Shrimp Croquette and that the smaller of the two appetizers pictured above was the true Fried Gouda Ball. 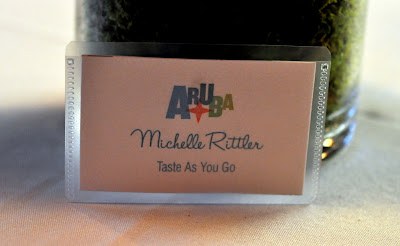 I pushed the mix-up out of my head and focused on the cheerful design of my place card. I'm still not used to seeing my married name in print. :) 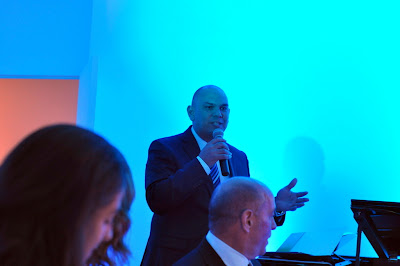 Otmar Oduber, the Aruba Minister of Tourism, Transportation, and Labor kicked off the dinner portion of the evening by giving us a little glimpse of the country's culture. His description of the how the sandy shores of Aruba's beaches intersected with the rugged desert  of the northeast cost of Arikik National Park made me want to pack a bag and head immediately to the nearest airport offering non-stop flights to the island. 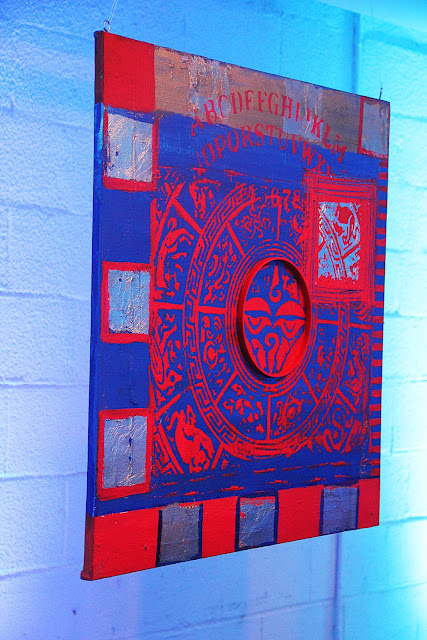 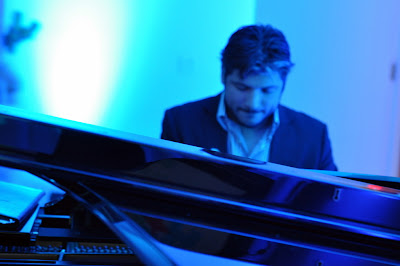 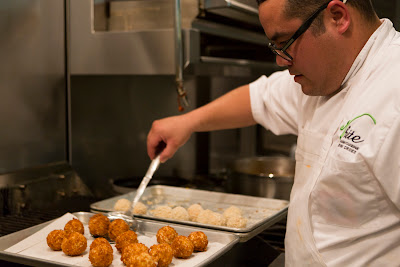 Surrounded by the striking artwork of Elisa Lejuez and enveloped by the music of Jonathan Vieira, we all eagerly began digging into the dishes specially prepared by Chef Urvin Croes. 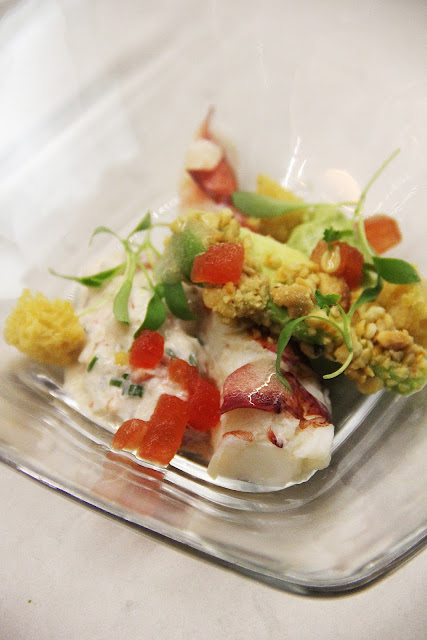 Our first course evening, the Lobster Salad, was my favorite of the night. Luscious Maine lobster meat was served with cilantro avocado creme, compressed watermelon, and cashew nuts and dressed with a lemon-lime dressing. Chef Croes plated the salad to resemble Aruba's coral reefs.

Now, the dish was paired with a 2012 Cape Mentelle Sauvignon Blanc Semillon, which, unfortunately, I never had a chance to taste. The server poured me a glass of the 2010 Moscato Asti intended to go along with our dessert instead of the Sauvignon Blanc. An unfortunate mistake, as I'm sure the original wine would have accentuated the subtle sweetness of the lobster. 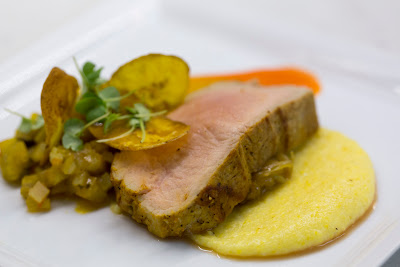 For our main course, Chef Croes prepared Banana Stoba (Stewed Plantains). Veal strip loin was plated alongside the stewed plantains with semi-roasted tomatoes, plantain chips, caramelized onions, and soft polenta and was paired with a 2008 Richard Sauret Reserve Zinfandel, Paso Robles. I hadn't had veal in, probably, well over a decade and I considered it quite a delight to get reacquainted with the protein.

The spices rubbed on the outside of the veal loin truly complemented the remaining components of the dish, especially the sweetness of the caramelized onions, but I would have wished for softer polenta. By the time the entrees were served to our table, the polenta had set up a bit, making swiping up a little of everything in one forkful somewhat awkward. 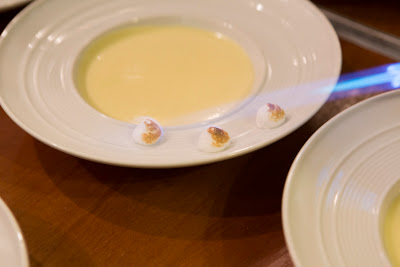 The main course came out when I expected to be finishing with dessert, emphasizing, again, that we were there to experience multiple facets of Aruban culture. Unfortunately, living life on "island time" wasn't going to help me catch my bus back home, and I alerted the organizers that I was going to have to skip dessert.

Well... Do you know what they did?

They went back into the kitchen and brought out a single serving of Chef Croes' dessert, just for me. An incredibly nice gesture and amazing display of hospitality. Another taste of the island, I'm sure. 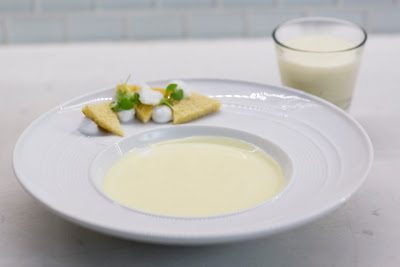 I'm thrilled that I was able to taste the dessert, a spin on Tres Lechi. Sponge cake was served atop torched Italian meringue with an eggnog soup, vanilla custard milk, and milk granita. Had I more flexibility with my schedule, I would have stayed a little longer and would have asked for another bowl of the soup. It was absolutely heavenly! 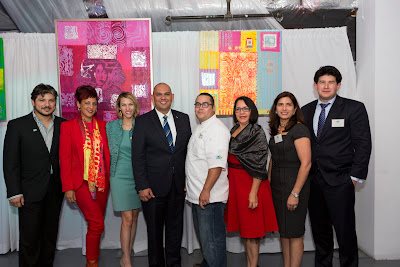 Thank you so much to the Aruba tourism team for inviting me to join the Taste of Aruba festivities! You left me wanting to plan a trip to the island so I can learn more about the culture through firsthand experience.

Save me spot on the beach and have another Aruba Ariba waiting for me! (Hold the cranberry juice, if possible.) 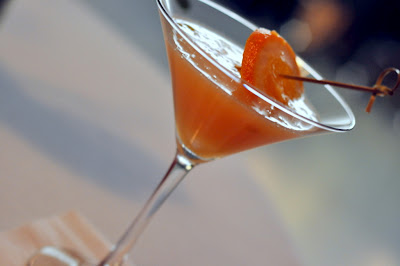 I was provided with the opportunity to attend this event at no cost to me. I did not accept monetary compensation for writing about my experiences. All opinions expressed are my own.