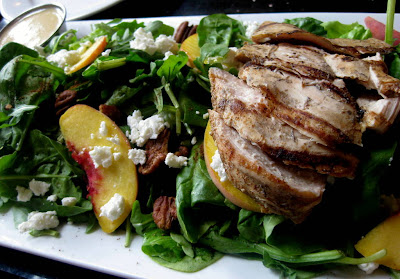 Like anyone else, I have very distinct memories about my hometown -- the people, the places, the traditions. This is especially true about the center of Wallingford, where I spent a lot of time as a teenager. I can tell in an instant when something has changed on Main Street, which probably isn't as impressive as it sounds given that my trips home don't occur as frequently as I would like.

My point is, my initial reaction to turnover of businesses in that part of town isn't always positive. It's not that I've become an old goat who's resistant to change... it's that the change is chipping away at the landscape of those memories. 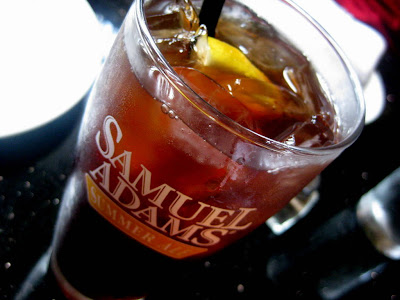 When I was up in Connecticut over the summer scouting potential rehearsal dinner venues with my father, I noticed a new-to-me restaurant, J. Christian's, situated in the 1920's bank building on Main Street. We didn't have time to sit and try the food, but we did pop in long enough to check out gorgeously renovated restaurant, which featured a grand staircase and balcony. Ultimately, though, we had to concede that there just wasn't adequate space to accommodate the size of our party. Before leaving, I made a mental note to try and eat at J. Christian's the next time I was home. 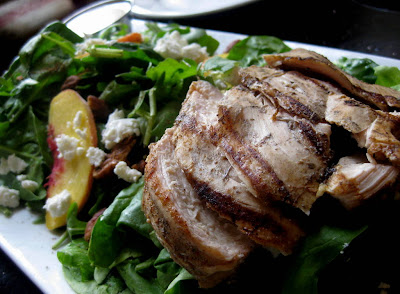 I was ready to embrace the new, so Stephen and I went to J. Christian's for lunch and to take a break from all of the wedding-related errands we were running. The restaurant was only about half full of diners, including ourselves, and seemed to be popular with the Ladies Who Lunch crowd. It made me wonder what kind of crowd populated the restaurant during Happy Hour. 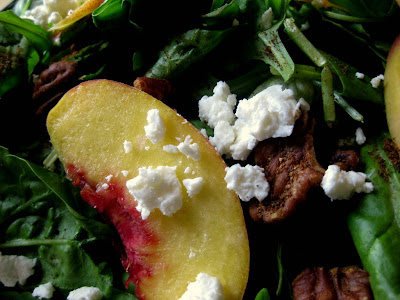 While I sipped my Iced Tea, served to me in a Samuel Adams Summer Ale glass (nice!), I looked over the items on the lunch menu. I was tempted by the Lobster Roll but changed my mind when I noticed the addition of Cajun Remoulade. (A Connecticut-style lobster roll would never have a mayonnaise-based sauce on it.) Instead, I went with a lighter option -- the Peach Salad ($9) with mixed greens, spiced pecans, peaches, and crumbled goat cheese. I added the Grilled Chicken for an additional $5. 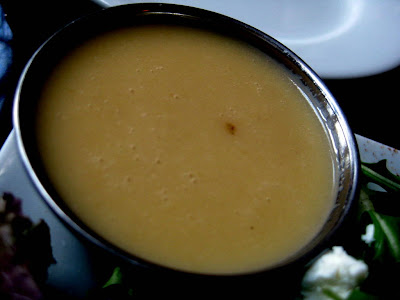 Overall, the salad was just okay. The portion was extremely generous, especially considering we were eating lunch and not dinner, and the chicken was well-seasoned before it was grilled, but I'm afraid that's where the positives end. Despite being well-seasoned, the chicken was on the dry side, and I had to practically down the meat with the accompanying Honey Ginger Dressing in order to eat it.

As for the peaches, they were frozen, which was extremely disappointing to discover. Peaches were in season, so there was no reason to use frozen fruit. I suppose I could understand if the local fruit wasn't up to par, but then I'd expect them to just take the peach salad off the menu for that day or to substitute the peaches with something of better quality.

Perhaps, the salads aren't the way to go at J. Christian's. I mean, the restaurant was named the Best New Restaurant in New Haven County in 2012, so there must be something on the menu that's drawing people in. I'm going to have to give them another try next time I'm up in Connecticut to see if I can figure out what it is.