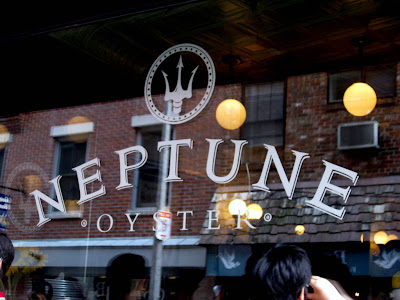 Because Stephen and I have known each other for so long (nearly 15 years, if you can believe that), I was genuinely surprised to discover during our pre-honeymoon trip to Boston last August that he had never eaten a lobster roll before. He didn't grow up in New England, where lobster rolls are standard fare during the summer months, so I guess I shouldn't have been that surprised... 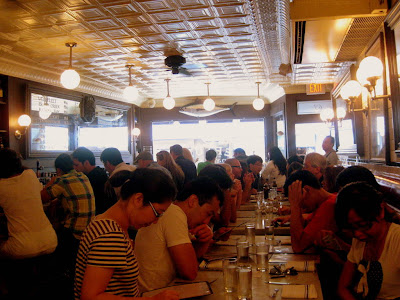 So, of course, introducing Stephen to the lobster roll became an immediate priority, and I turned to Brian Samuels of A Thought For Food (who also happened to be our illustrious wedding photographer), for a list of restaurant recommendations. After a quick exchange of text messages, Stephen and I had several options to choose from. We love the North End, so we decided to give up our bench in Boston Common and make our way over to Neptune Oyster for lunch.

The restaurant is small with a limited number of tables and seats at the counter, so our wait for a table was considerable. No matter to us, though. Our agenda was wide open. We used the time to enjoy the insanely gorgeous weather and to get in some quality people-watching. 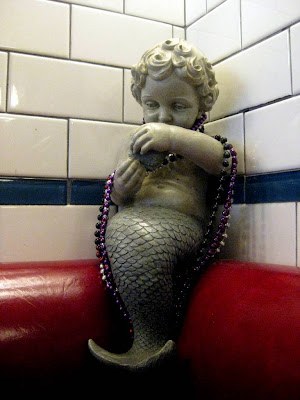 When our name was finally called, the hostess led us to the back of the restaurant, where we were seated at a table and wedged between a family of four and a group of traveling Asians. They brought massive amounts of luggage into the restaurant with them, which just made the fit into our seats that much tighter. Not ideal... but what are you going to do? 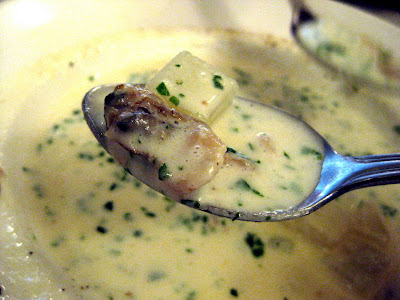 We built up quite an appetite while waiting, so Stephen and I decided to share a bowl of Clam Chowder ($11) while waiting for our lobster rolls to come out. Creamy, buttery, and full of clams and chunks of potato. It showcased everything that I love about real New England clam chowder and highlighted the exact reason why I'll never buy the canned version.

FYI... splitting the soup was totally the best decision -- that stuff is rich! 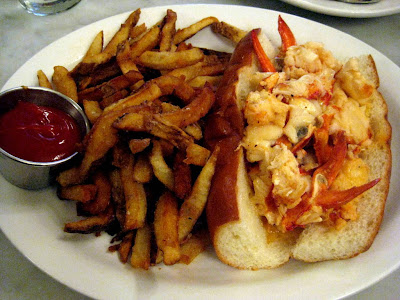 But, the star of the meal, and the real reason why we waited so long to eat, was the Maine Lobster Roll ($25). Served on a toasted roll, you can order your sandwich hot with butter or cold with mayonnaise. I will only order a lobster roll with butter -- I am from Connecticut, after all -- so that's how I ordered mine, but I told Stephen that he had to listen to his gut and base his decision on his own personal preference. (I didn't want my opinion to influence his first experience with a lobster roll.)

He wound up following my lead. *grin* 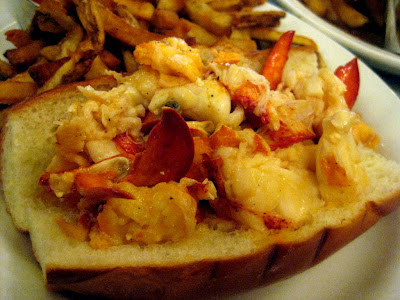 Just look at that.

Although the roll was toasted, it was still soft and soaked up the decadent melted butter, the only accompaniment you need (in my opinion) for that glorious mound of sweet lobster. It was almost a shame to see the generous pile of fries on the plate alongside the lobster roll. I sprinkled the fries with malt vinegar, like any other New Englander would, but I didn't really intend on spending too much time eating the them.

I had other business to attend to. 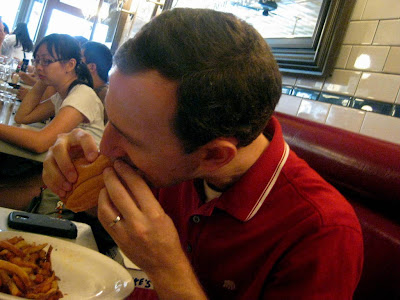 I waited to dig into my sandwich long enough to document Stephen's first bite of lobster roll ever. And long enough to watch the resulting smile spread across his face as he realized how amazing lobster rolls are. He devoured his sandwich in no time and seriously contemplated ordering another one before his food coma set in. Common sense visited him, though, and he leaned back against the booth in satisfaction and watched as I finished my own roll.

As we were leaving, I asked him whether he'd ever want to try a lobster roll with mayonnaise to get the full lobster roll experience. He shook his head adamantly and told me that he was convinced that the only way to eat a lobster roll was to eat it hot with butter.