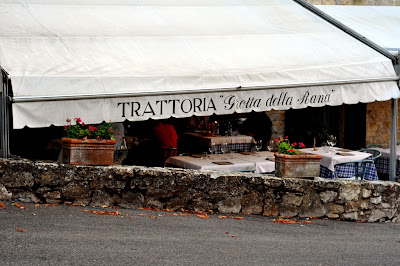 This is the first post in my Taste of Tuscany series.

What is it about the winter months that propels me into a perpetual state of wanderlust? Maybe it's the staying indoors to stay out of the cold that's causing me to long to travel. To see other places. Whatever the reason, my desire to just go somewhere is pretty damn strong these days.

Given that, I thought it would be the perfect time to sort through the photos I took while Stephen and I were on our honeymoon in Tuscany and to finally start writing about the delicious food we ate while in Italy. Hopefully, remembering our trip will satisfy my need to travel until I can afford to plan a real trip.


After a long travel day, which included an 8.5-hour flight from New York to Pisa and an 1.5-hour drive from the airport to our Tuscan B&B, Stephen and I were pretty tired and weren't up to driving aimlessly around a foreign country looking for a restaurant that might be open. Thankfully, our hostess Elena Nappa was all ready to give us suggestions as to where we should eat while in Tuscany. Since it was late, she sent us to the Trattoria La Gratta della Rana in San Sano and even called ahead to the restaurant to make sure they had a table waiting for us upon our arrival. 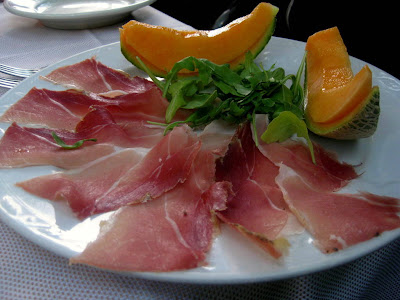 In Italy, a trattoria offers diners simple food and an assortment of local specialties. I couldn't think of a better place to kick off our Italian eating adventures than here. The sun was just starting to dip when we pulled up to the restaurant, and, despite the chill in the air, Stephen and I opted for un tavolo al fuori (a table outside) so we could enjoy the view of the beautiful little village.

We ordered a plate of Prosciutto e Melone (Prosciutto and Melon) from the Antipasti menu and enjoyed the classic salty-sweet combination while sipping our first bottle of local wine. We were in the heart of the Chianti Classico region, so how could we not? From the first bite, we were addicted to the flavor of the locally-made prosciutto, and I knew we'd be ordering it as much as possible over the next week. 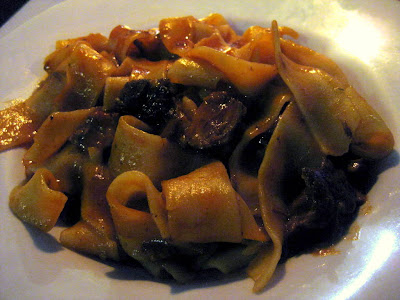 From the Primi menu, I plunged right into the local cuisine and ordered the Pappardelle al Cinghiale (Pappardelle with Wild Boar). The gaminess of wild boar meat emerges as the animal ages, so the meat is generally marinated for at least 12 hours before it's cooked. With respect to this dish, the boar meat is marinated in a mixture of red wine, onions, carrots, celery, and bay leaves before being cooked for at least 4 hours in a mixture of pureed tomatoes and more red wine. As one would expect, with all that time yields so much flavor, and I absolutely loved the richness of this dish.

Though, I felt a little bad about eating my high school mascot.

The pictures didn't survive (bad lighting), but Stephen ordered the Lasagne della Casa (Lasana of the House), and we both had the Insalata Mista (Mixed Salad). For dessert, I had the Tiramisu and Stephen had the Panna Cotta along with our first of many cups of Italian coffee. Our first dinner in Italy was a satisfying success! 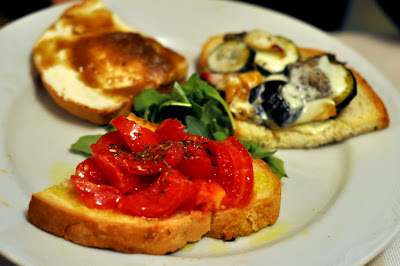 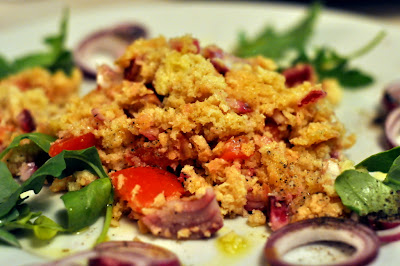 We enjoyed the food at Trattoria La Grotta della Rana so much that we went back a few nights later for another meal. It was too cold out to dine on the patio, so we requested un tavolo al dentro (a table inside) this time.

To start, we shared the Bruschetta and Panzanella. Rather than featuring chunks of bread, this version is prepared in the modern tradition by soaking stale bread in water before being squeezed dry and tossed with tomatoes, red onions, olive oil, vinegar, and salt and pepper. While I loved the texture of the bread salad, I thought there were too many onions in the dish and that the flavor of the raw onions overpowered the rest of the ingredients. 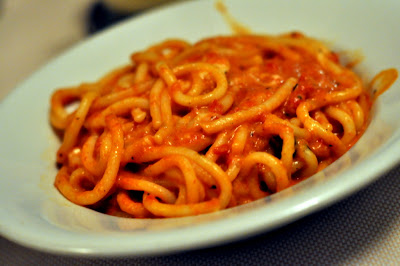 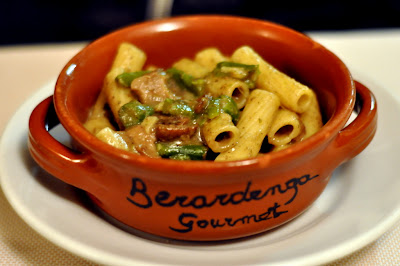 Because we loved the pasta dishes we had earlier in the week, we ordered, again, from the Primi menu. I went with the Pici della Casa (top) while Stephen ordered the Maccheroni della Nonna (Grandmother's Macaroni). Pici is thick, hand-rolled pasta that originates from Siena. It was the perfect vehicle for the accompanying tomato sauce, which was creamy and delicately seasoned. Another excellent example of the simple dishes one might find in this region of Italy.

More posts about the food we ate while in Tuscany are forthcoming, so stay tuned!